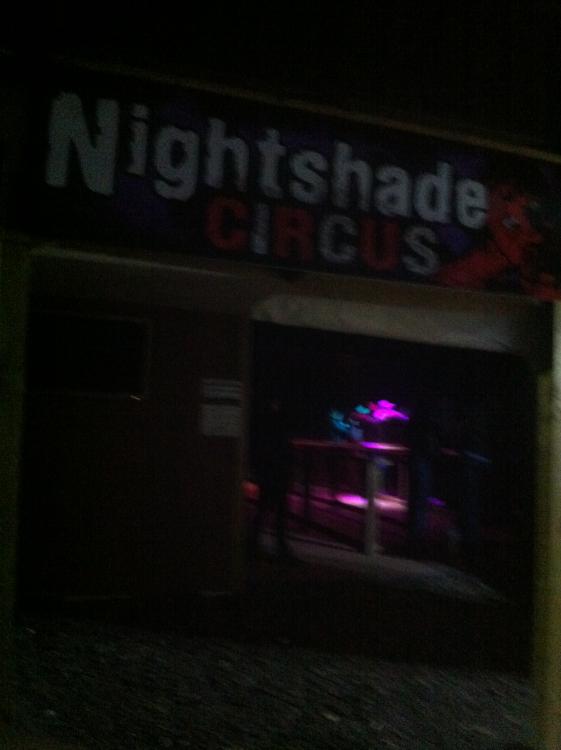 Tulleys farm is one of the best scream parks in the UK, and this year Tulleys has expanded to 8 attractions!

Here's my review, sorry not many photos, but I was having so much fun I forgot.

Nightshade replaces Twisted from last year, it is very similar in some ways.

But also very different, the maze was full of curtians.

With loads of other things too..including VERY uneven floors, a spinning tunnel, and a bag squish section (I call it the fanny).

Another change is the ending,there was a clown on the floor, who got up and had a noisy power tool!

The Colony: I hated The Tunnel last year, The Colony is way better in a way, it weaves in and out of darkness and tribe(ish)

sections. At one point there is even a teepee! The ending was decent,not the best maze but still good.

This year its changed quite a lot, with it being very different from last year.

With new scenes including Sweeney Tod, a girl with a chainsaw friendly boyfriend.

Haunted Hayride for me will never get old, great attraction,

I guess it adds a unique addition to the lineup, ok gimmick, beautifully presented.

It is beautifully themed, with a great facade. The actors it does have are very lively.

But sadly its a little short, but a fun little attraction.

The Cellar: The Cellar is excatly like last year, amazing.

The Cellar is just mad, actors are mad, scream and jump at you.

They are loads of actors too, they are almost everywhere, most of the time they surround you.

The Cellar is really themed, dark and very scary.

The Chop Shop: Wow, The Chop shop was great, it was mad.

The Chop Shop is like a chainsaw frenzy, with 6 (I counted) actors with chainsaws near the end.

It is very manic with blood everywhere, loads of strobes and actors with chainsaws.

The Chop Shop is awesome,best maze of the night.

The Volt: Hmm, The Volt was wierd for me, it fell a little bit flat.

There were shock pads, but it was light enough and wide enough for them to be useless.

They weren't many actors, it was short. Could be a lot better.

Roamers: They were loads of roamers, from chainsaws, too popcorn girls.

I saw the mummy, dracula, and loads of more roamers.

The roamers are way better than Thorpes IMO.

Overall I had a good time, Tulleys was great this year.