We had Day 2 in the park today! We got up fairly early and as we were staying in the Alton Towers Hotel, we had somewhat of a head-start (or I did, anyway; my mum and Nan joined me later); even though Early Ride Time is no longer offered, the park opens its gates early to allow you to get to your first ride and queue for it before opening time, and staying in the hotel will naturally allow you to get here ahead of the regular day guests, which is always a bonus: 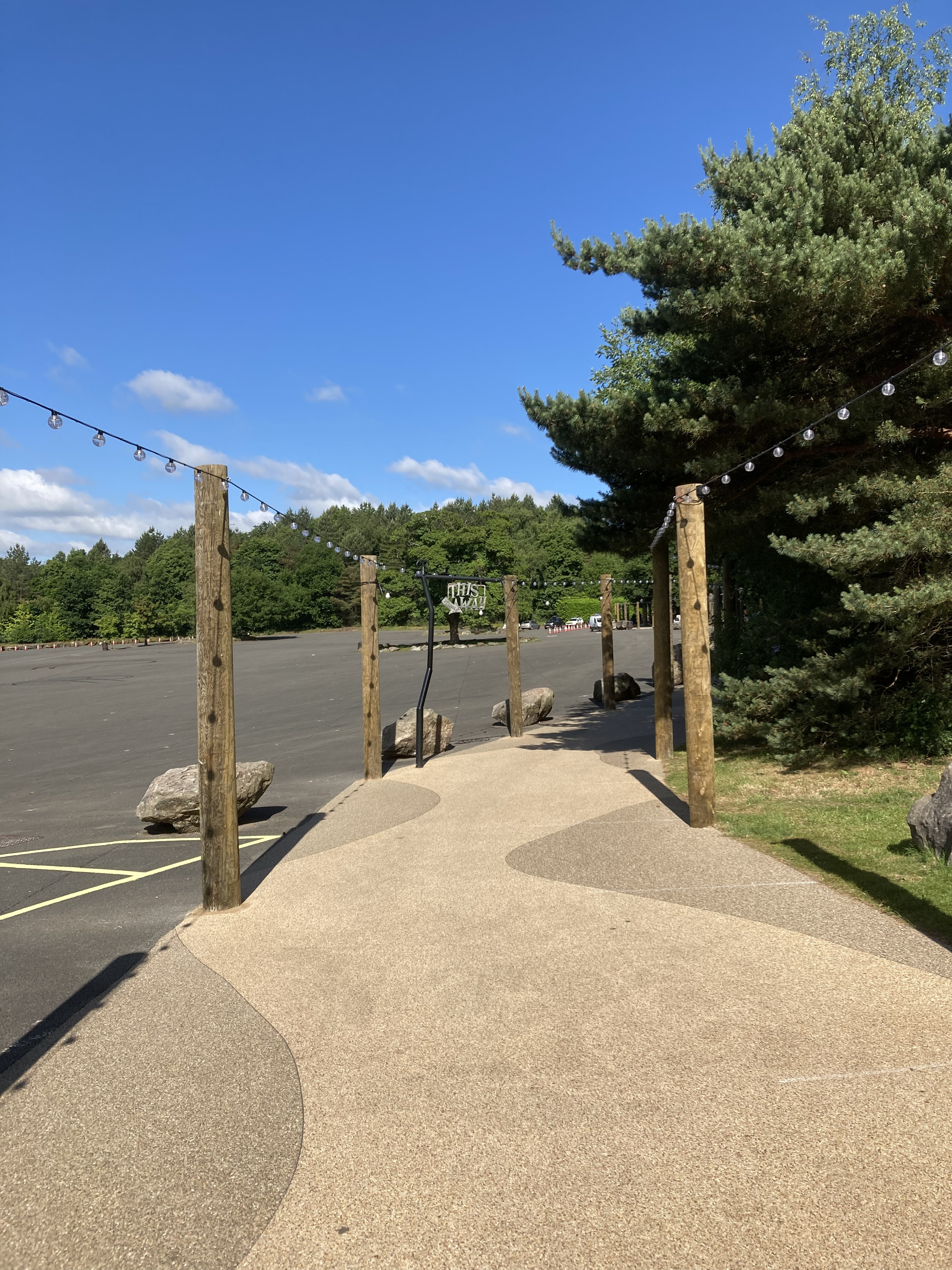 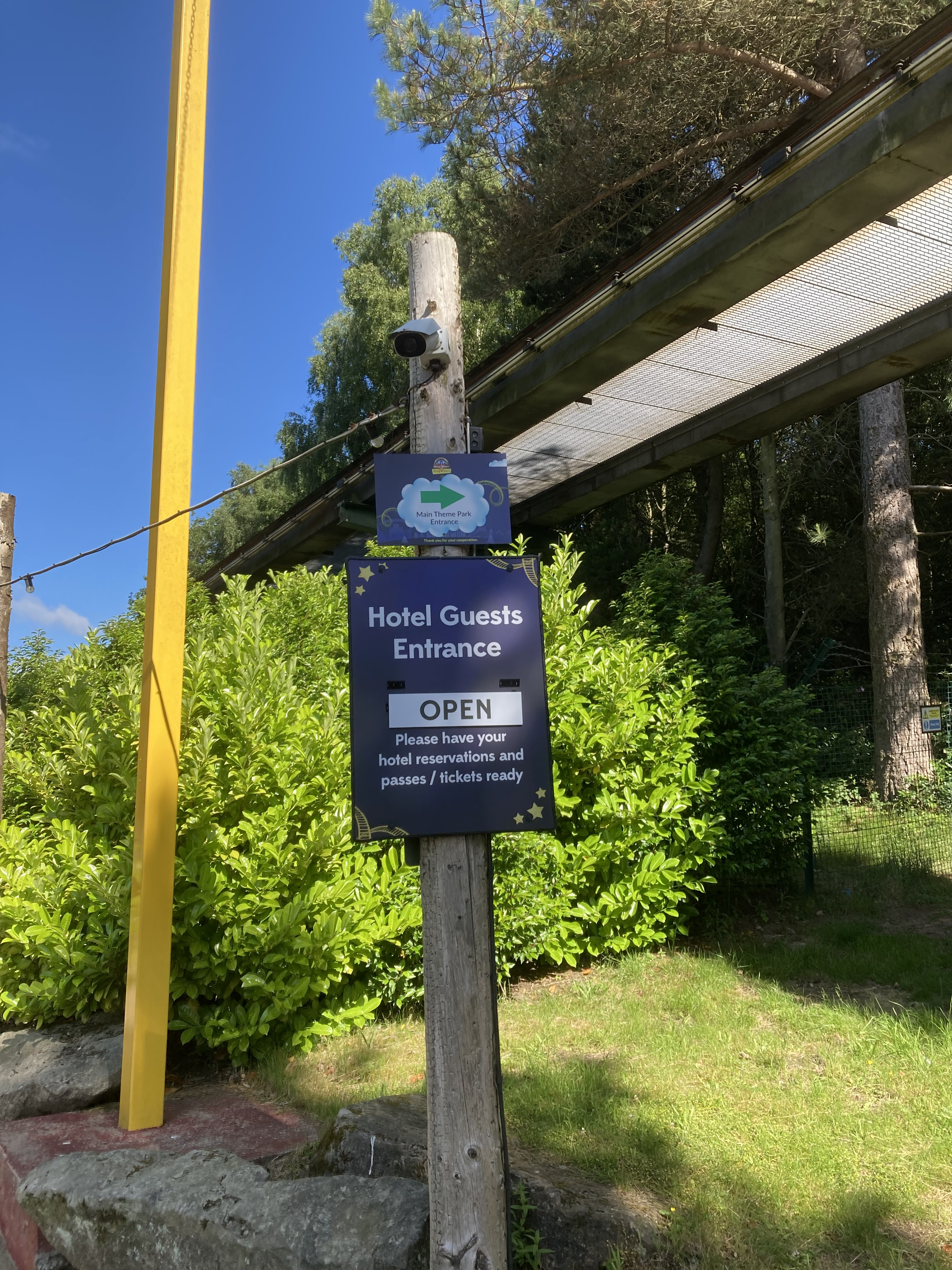 As such, I decided to take advantage of this and head into the park at about 9:25am and head to an area that often gets long queues later on; Dark Forest. I started on…

Rita often gets a long queue later on, so I decided to give it a go early on. I watched the ride test for a bit, and I was one of very few people waiting in the area. As such, when the ride opened at around 10:05am, I discovered that I would be on the very first ride of the day, which is an achievement I’ve never had before! So, how was the ride? Well, I was seated in row 5, and the ride was more pleasurable than yesterday’s, with less rattle and some phenomenal airtime, as well as a launch that’s punchy as ever and absolutely supercharged pacing! Perhaps controversially, I do like Rita, and it was a great way to start the day: 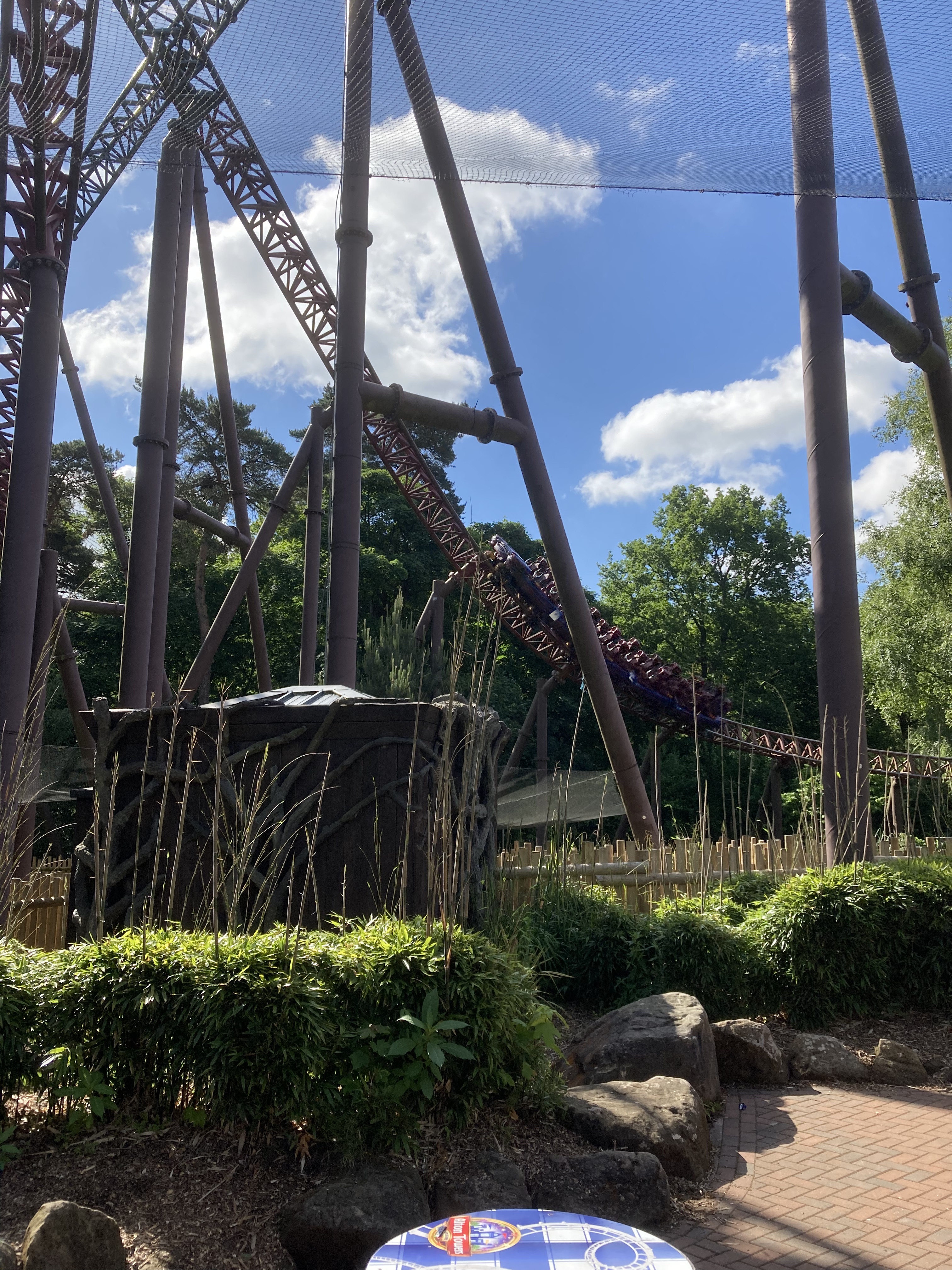 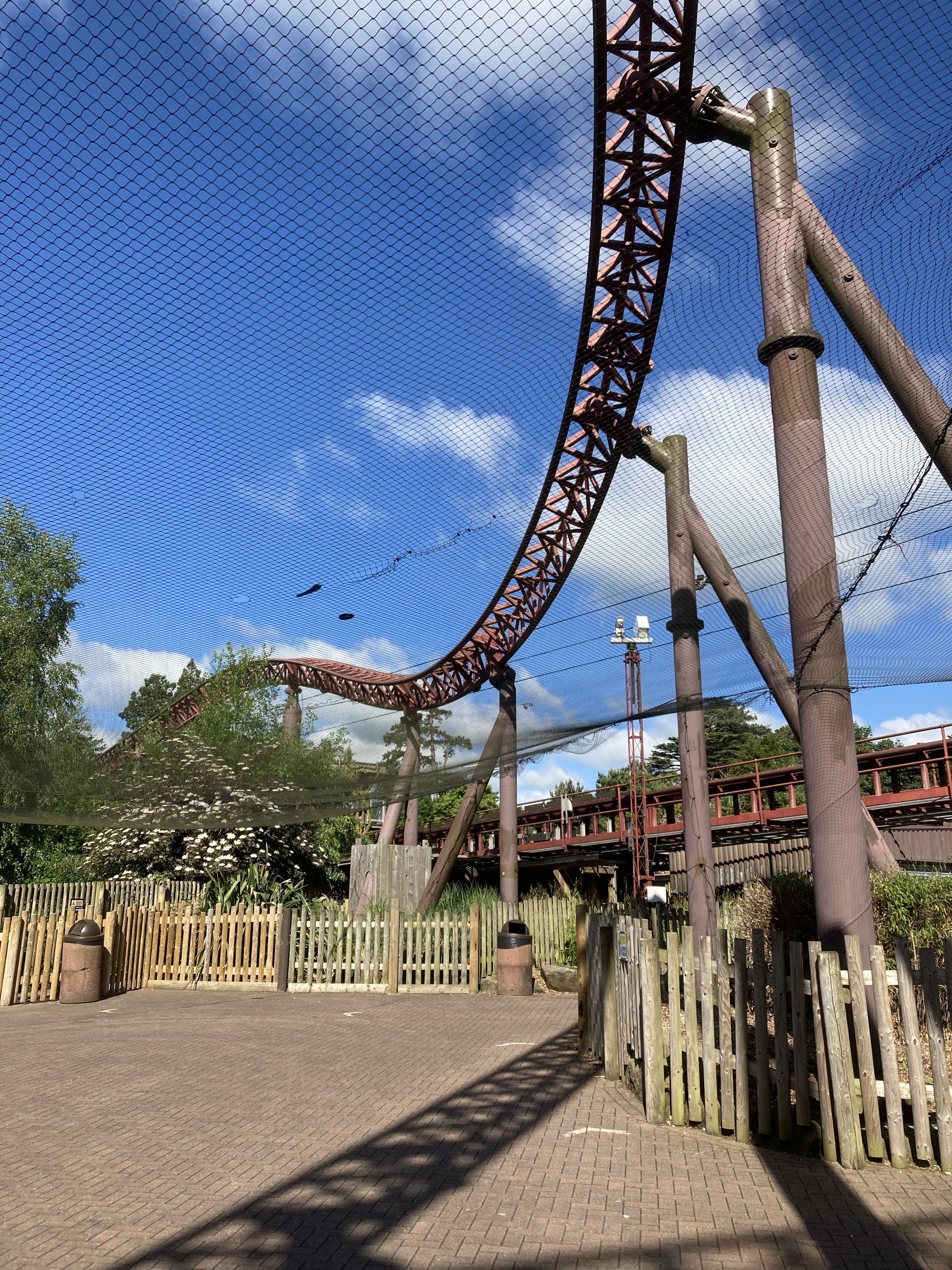 After Rita, I decided to tackle the other coaster in the area…

Like Rita, Thirteen was on a walk-on queue, so I decided I may as well give it a go while I was in the area. I wasn’t 100% sure of this, so wouldn’t like to claim that I was, but it looked as though I may have made the first ride of the day on Thirteen as well; the train in front of me was empty, and the station looked deserted when I arrived! So, how was the ride? Well, I was seated directly on the back, and it was excellent; I once again experienced multiple moments of cracking airtime during the outdoor section, the twisty sections were great fun, the ride was blissfully smooth, and the indoor section was a good laugh as always! I‘ve got to say, I think Thirteen is definitely a back row coaster, based on my memories of the front: 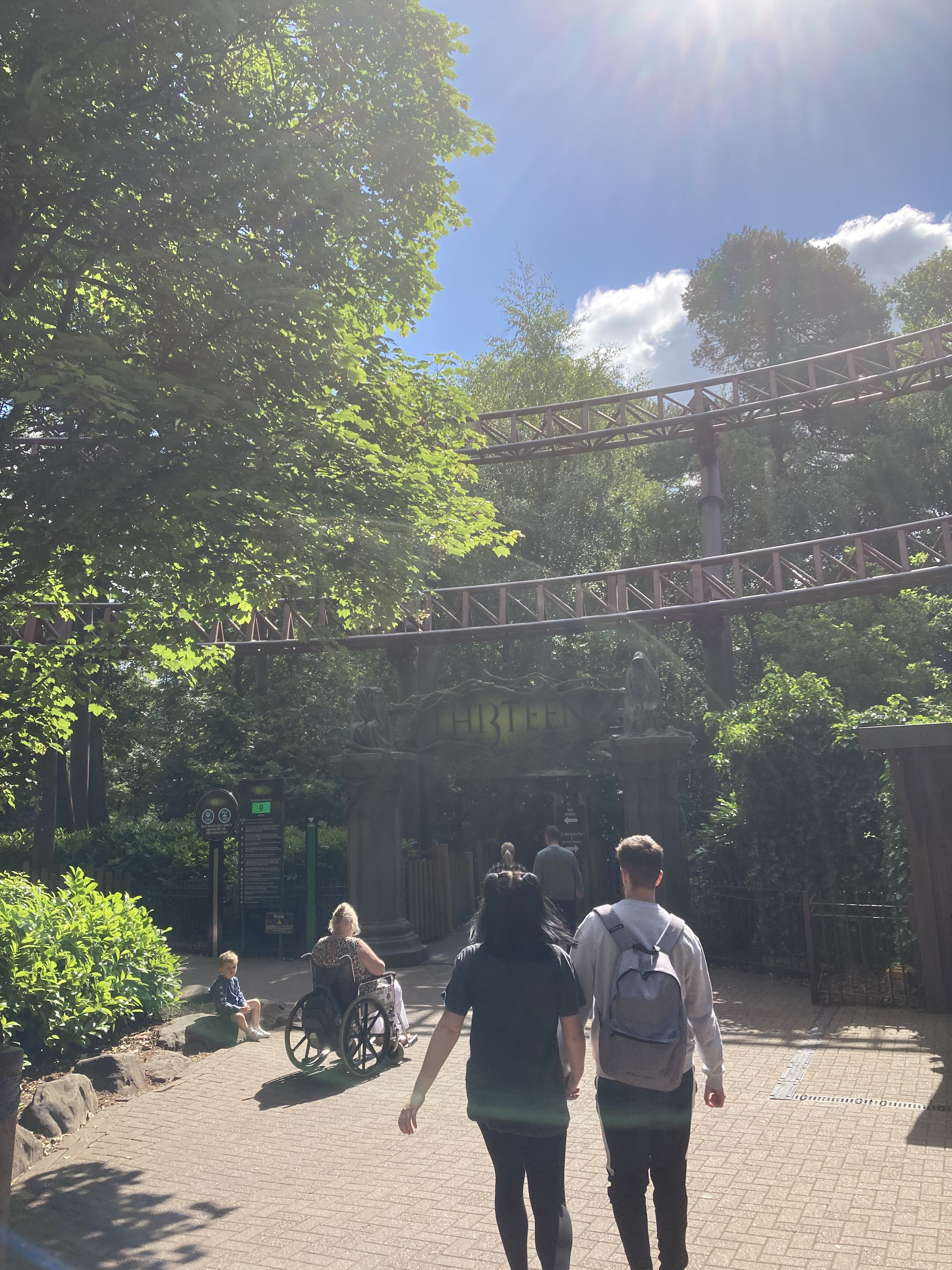 After Thirteen, my mum and Nan entered the park, and we attempted to ride Thirteen together. We got as far as the station, and I was even batched into the front row… but the ride broke down. We stood in the station for about 15 minutes or so, hoping that the issue would be resolved quickly, but they eventually closed the queue line.

With that in mind, we left the queue. I initially went off to ride Oblivion, on an advertised 0 minute queue. However, the queue looked much longer than 0 minutes by the time I arrived in X-Sector, so I instead decided to rejoin my mum and Nan so we could all ride…

Wicker Man was on an advertised 55 minute queue, so we decided to give it a go. Interestingly, the queue only took 35 minutes as opposed to the advertised 55, which is always a bonus! Although this could have been in part due to a rather interesting quirk with the pre-show, where both the doors remained open. As such, no one watched it; we were just filtered straight through the room, and the show just started running to no audience while everyone was piling into the station! My mum and Nan were very happy that we didn’t have to watch it, and I have to admit that as much as I do like Wicker Man's pre-show, not watching it did shave off some time getting on the ride and make the experience less uncomfortable. So, how was the ride? Well, I was seated in row 8, and it was phenomenal; relentlessly fast and full of airtime just as it had been yesterday! We all thoroughly enjoyed it: 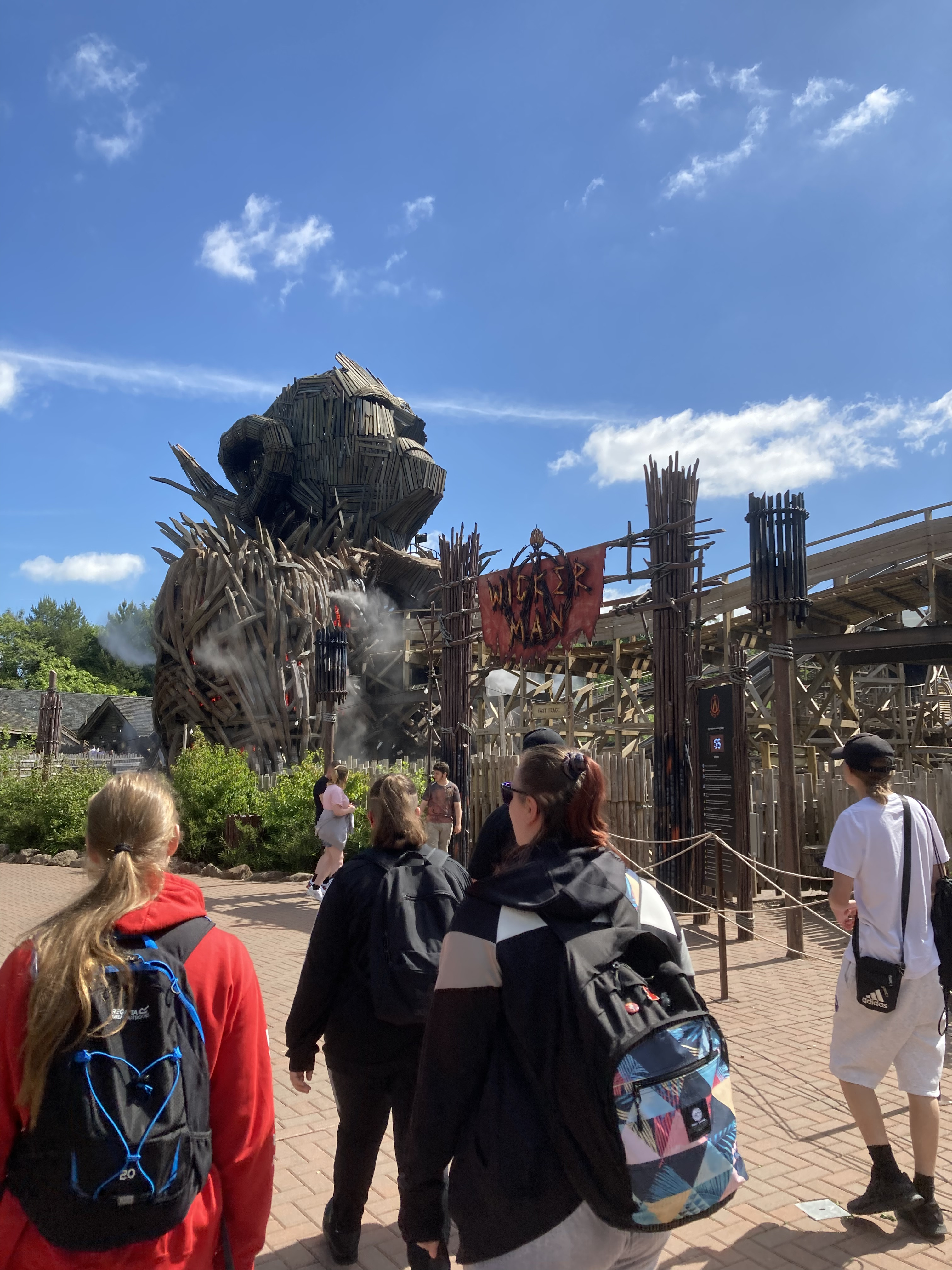 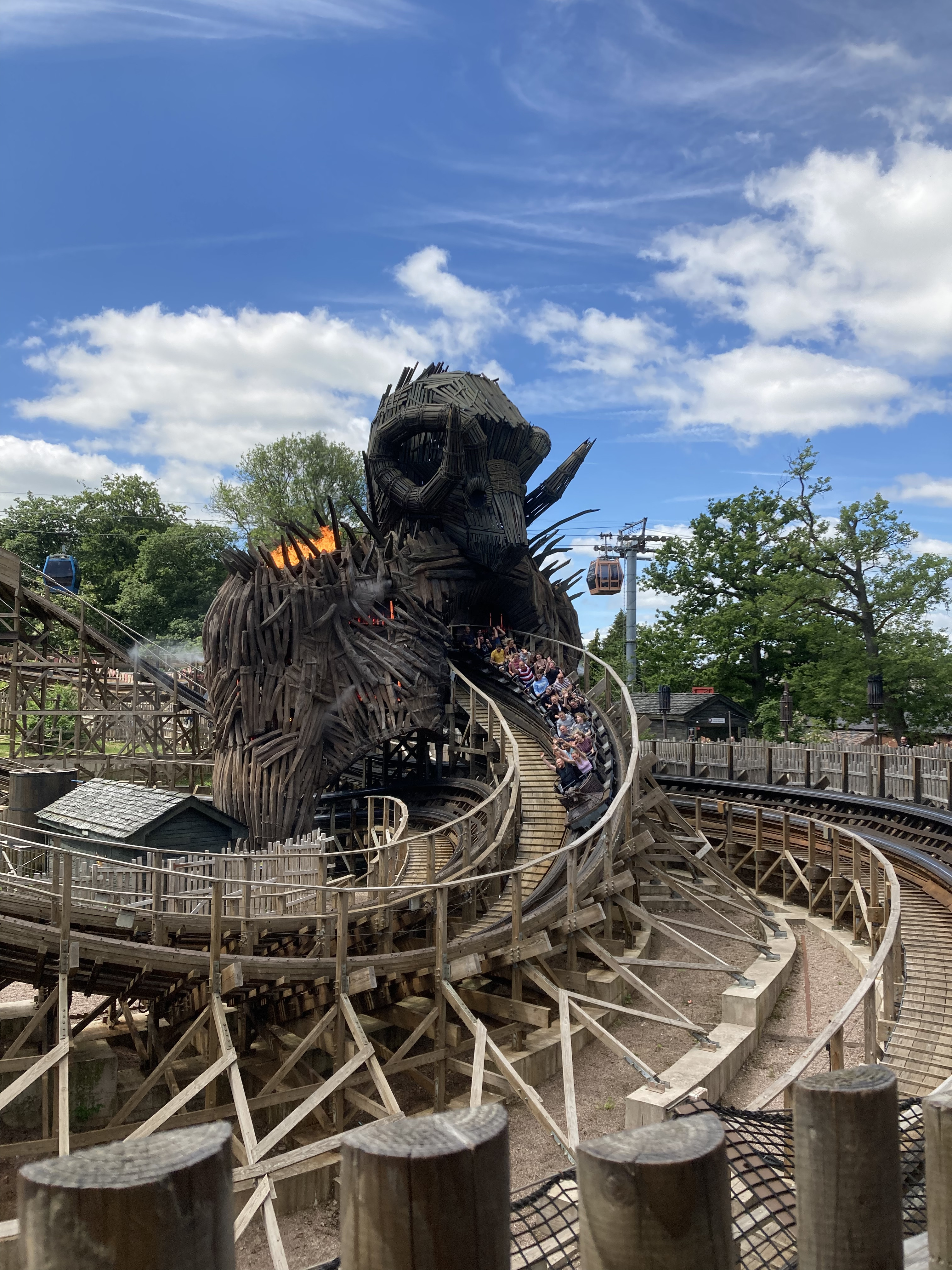 After Wicker Man, I headed over to X-Sector to ride…

I hadn’t done The Smiler yet today, so I decided to give it a go. The advertised queue was 70 minutes, and it was spilling well into the pit, but I once again used my secret weapon... the single rider queue! But the question is; how much shorter would my queue be today? Well, today was where single rider really came into its own... that queue was walk on, and I waltzed straight into row 2! I actually felt a bit naughty using the single rider queue today, as it basically felt like I was using Fastrack without paying for it... even though single riding via the SRQ is technically allowed, it felt a bit wrong to walk onto the ride when the main queue was 70 minutes. But how was the ride? Well, I'm afraid it was similarly rough to yesterday's; definitely not the most enjoyable: 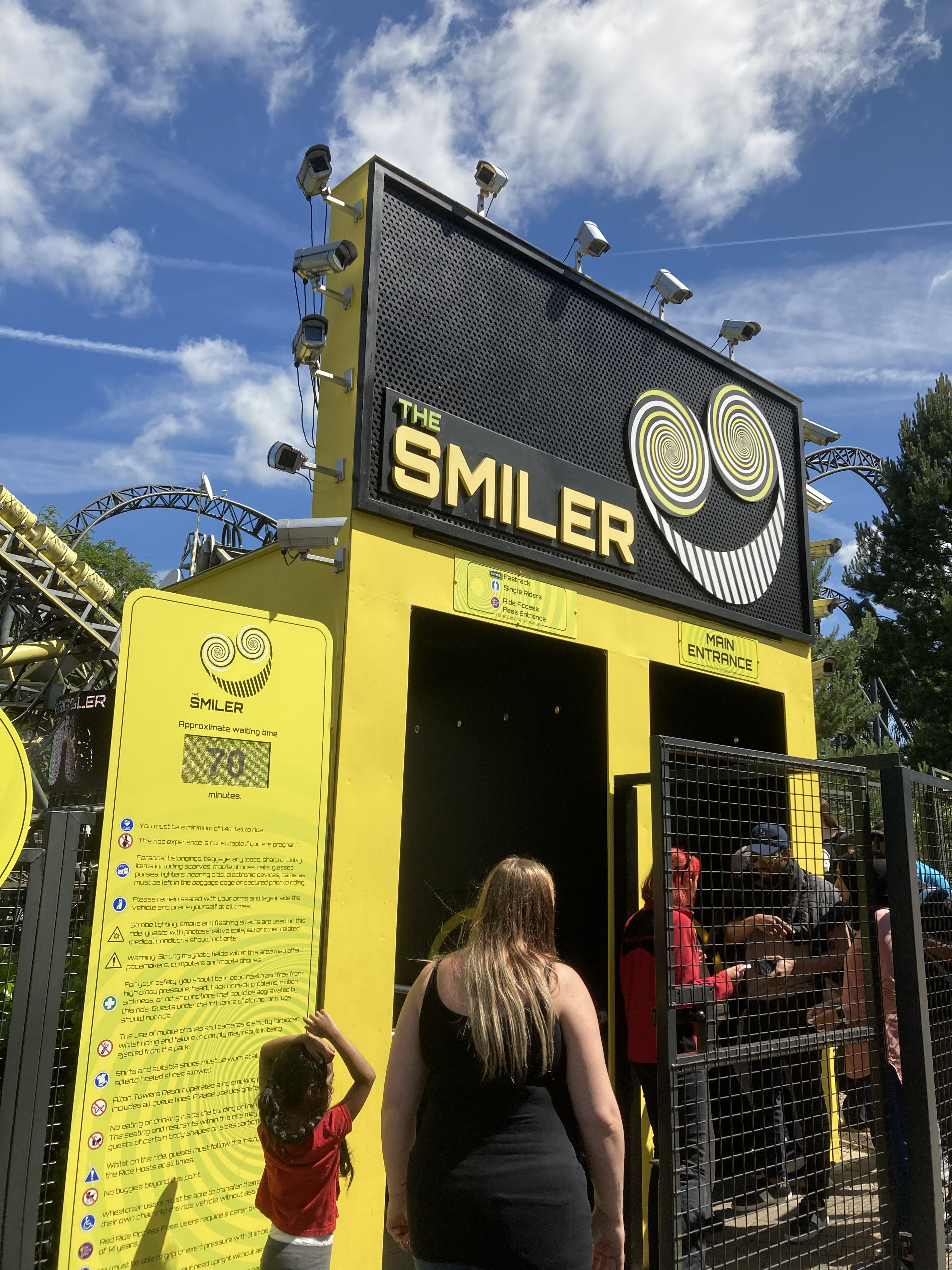 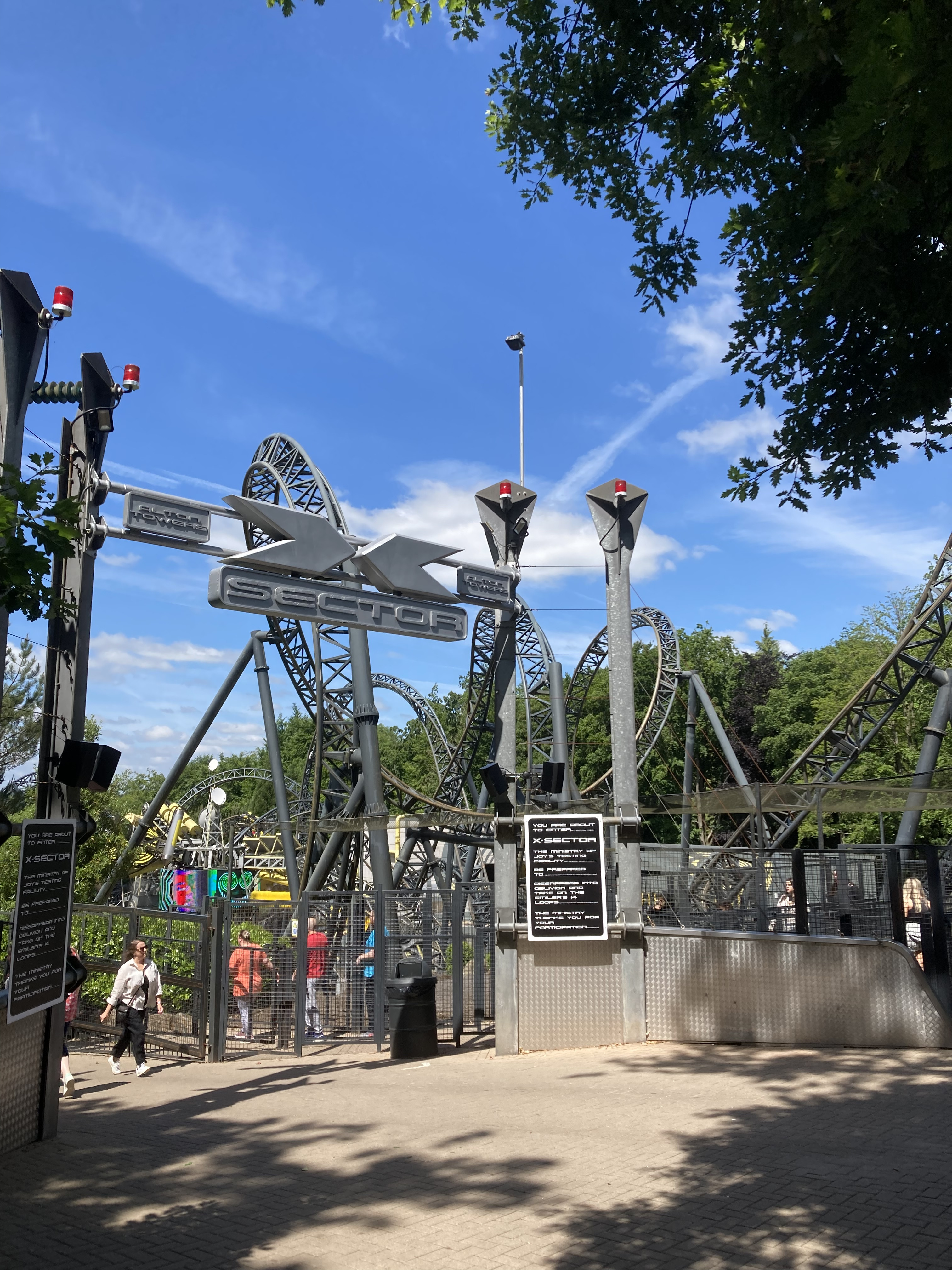 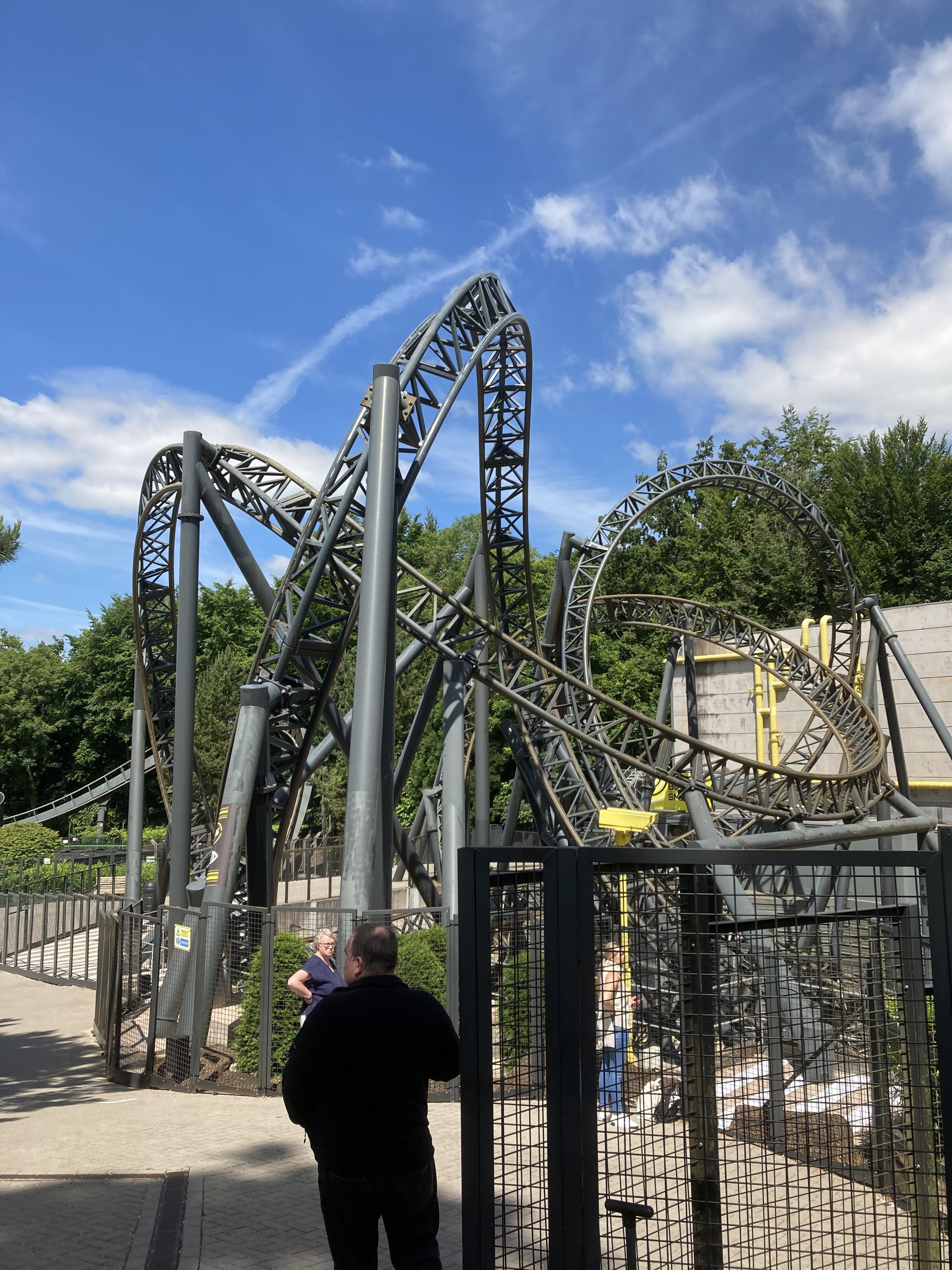 After Smiler, I couldn't leave X-Sector without having a go on...

Oblivion was on a 25 minute advertised queue, so I decided to give it a go. I did wonder upon joining whether the queue might be longer than 25 minutes, as it was stretching all the way to the tunnel underneath the station where the Lord of Darkness talks about the psychological effects of Oblivion (the longest queue I've seen for it in a while). However... it only ended up taking 10-15 minutes, and this was due to some of the best operations I have ever seen on the ride; they were throwing shuttles out at a rate of knots, my measured throughput average for Oblivion exceeded 1,000 riders per hour for the first ever time, and on 5 shuttles, we were only stacking at the end for a few seconds at most (for some idea, seasoned visitors to Alton Towers will know that you typically stack for a long time on Oblivion). Phenomenal work! So, how was the ride? Well, I was on the front row, and I actually enjoyed it slightly more than yesterday's ride! The sustained airtime was once again phenomenal, but the sense of speed, while phenomenal everywhere, seemed slightly enhanced on the front, for some reason: 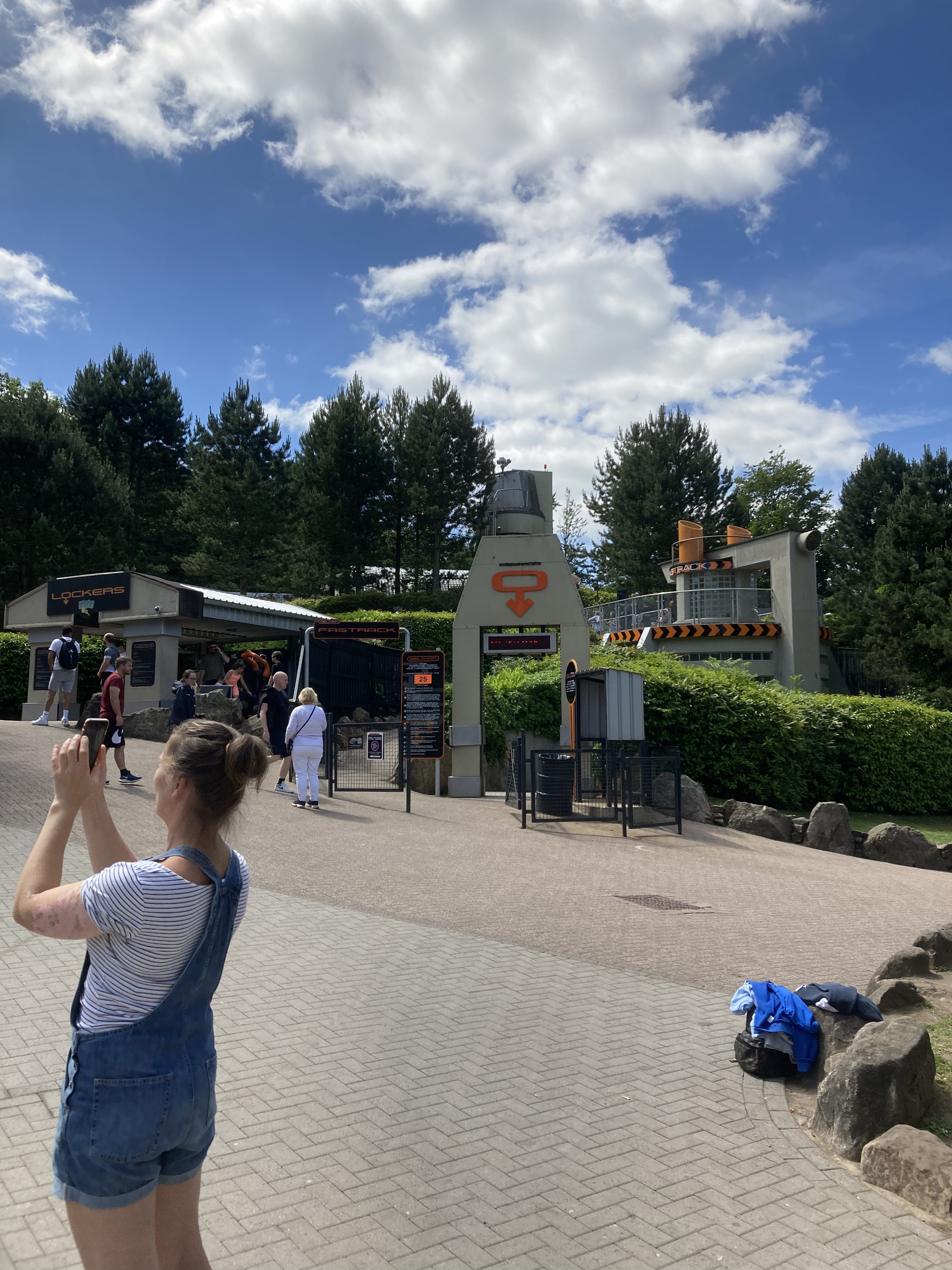 After my ride on Oblivion, I met back up with my mum and nan, and me and mum rerode Wicker Man on an advertised 35 minute queue. Interestingly, we watched the pre-show this time; clearly the pre-show skipping on our first ride was just a one-time issue! The queue still only took 25-30 minutes, though, so that wasn't an issue by any stretch. As for the ride, I was seated in row 8 once again, and the ride was phenomenal once again: 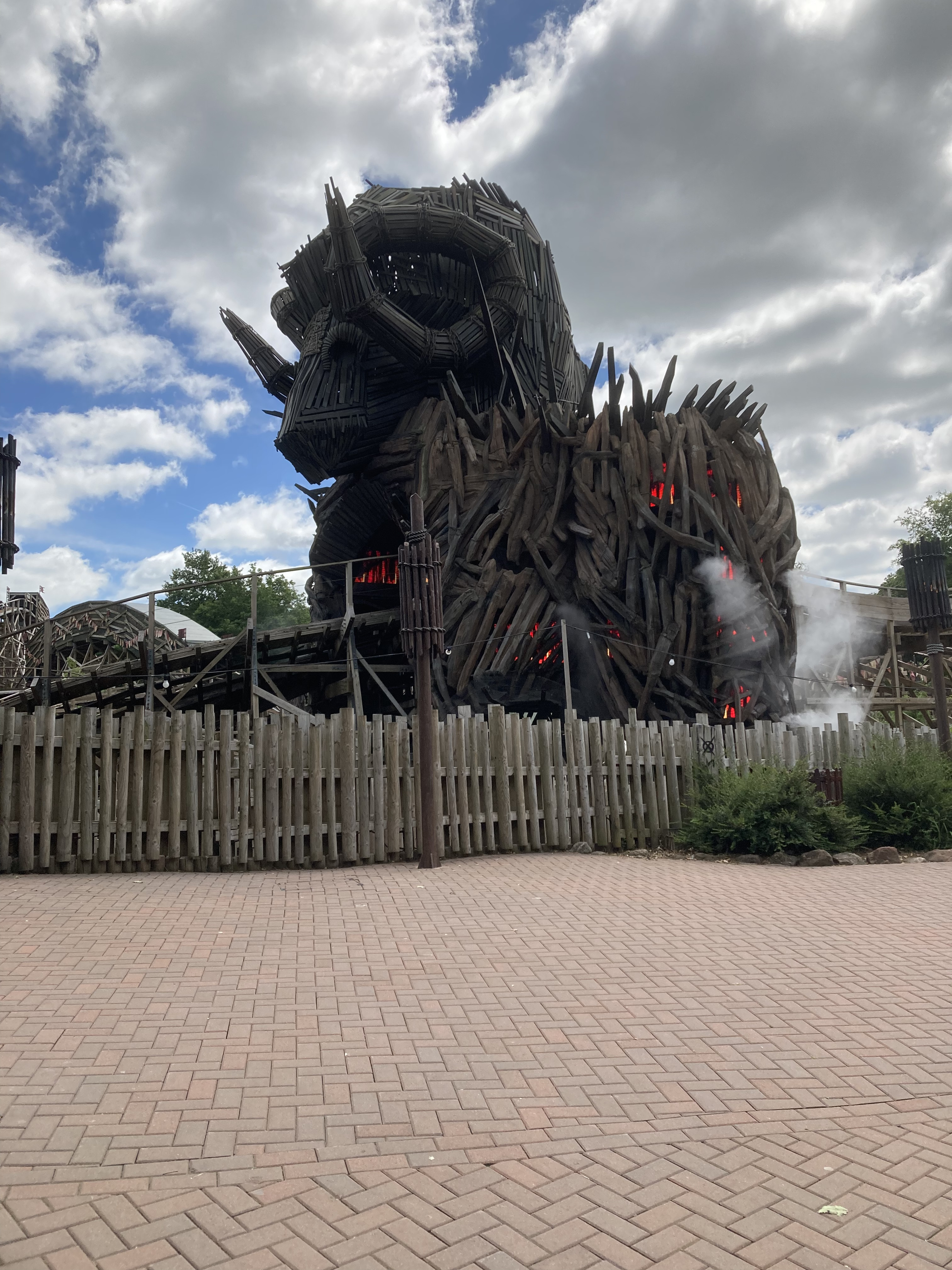 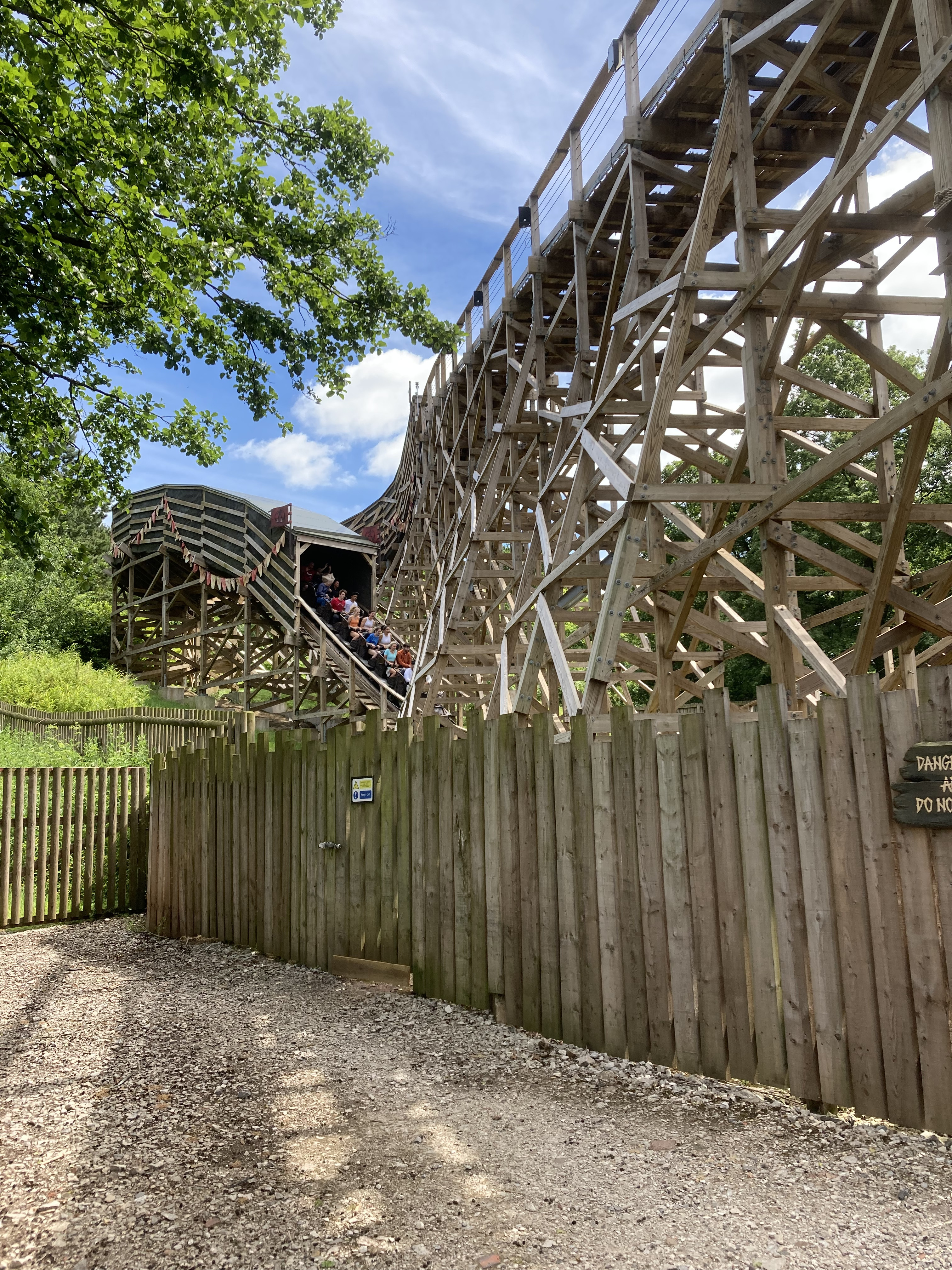 We then had some lunch before I wandered over to Forbidden Valley to ride...

Nemesis was on an advertised 25 minute queue, so I decided to give it a go. This queue ended up being pretty accurate, possibly slightly understated, taking 20-25 minutes; always a bonus! So, how was the ride? Well, I was seated in row 6 on an inner seat, and it was good, although slightly jolty in places. This wasn't a dealbreaker by any means, and I've ridden far rougher coasters, but it did detract ever so slightly from the ride for me: 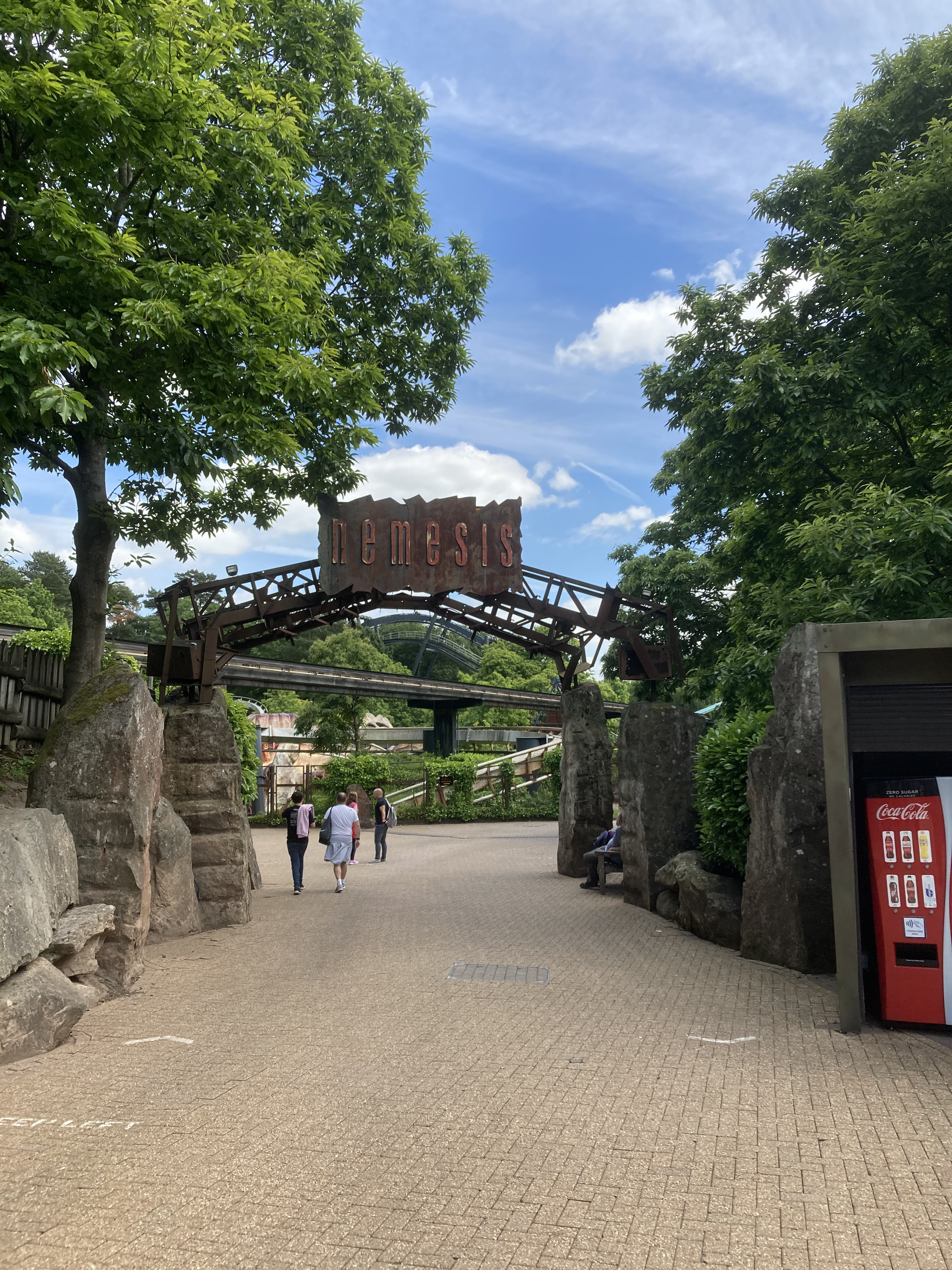 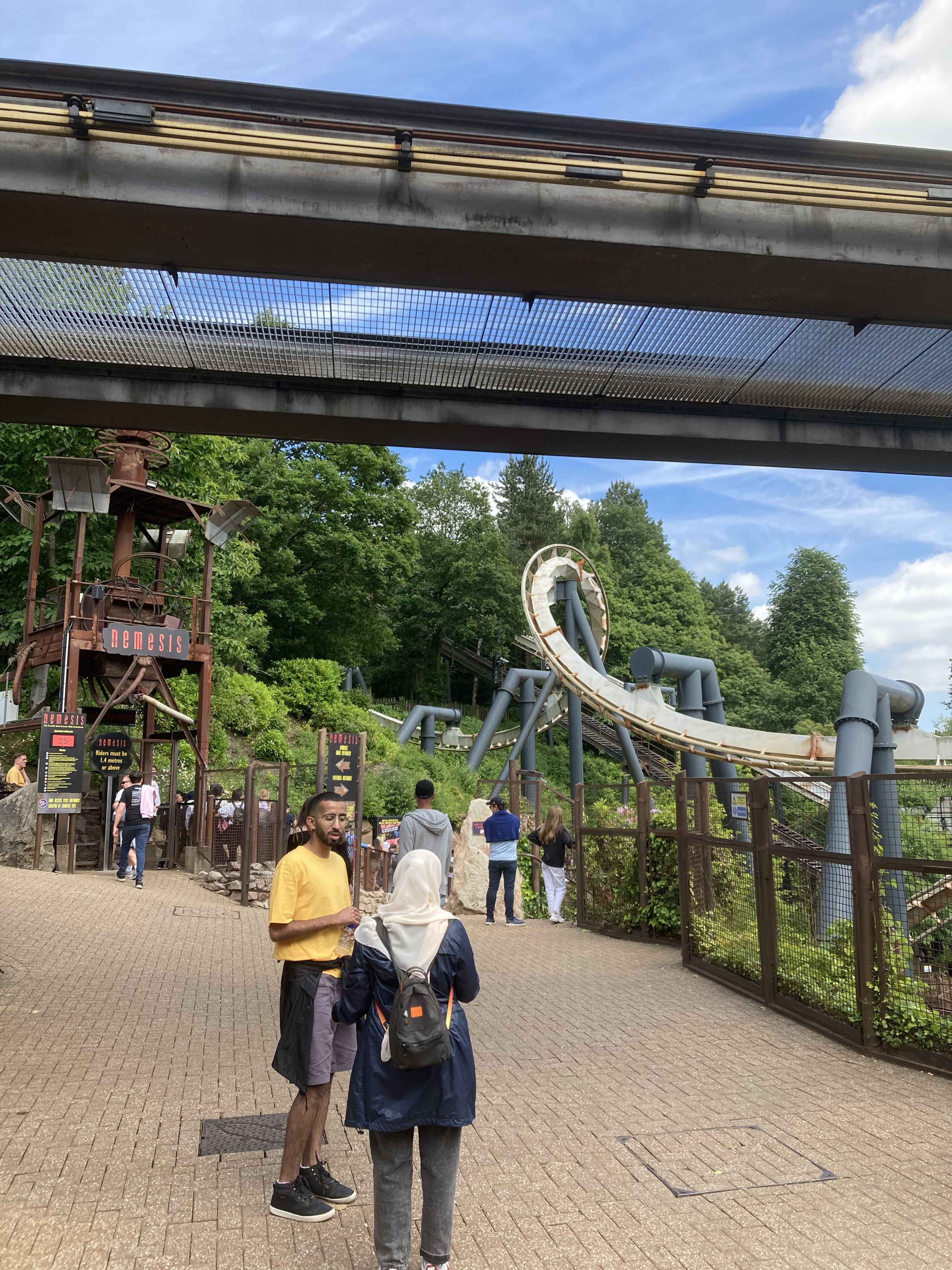 After Nemesis, I took a ride on the other Forbidden Valley B&M...

Galactica was on an advertised 25 minute queue, so I decided to give it a go. The queue was overstated, only taking 15 minutes in the end; always a bonus! The operations on Galactica were top notch this afternoon; the ride was running 3 trains and both stations, yet we didn't stack on the brake run at all. My throughput average for Galactica was 1,221pph, which was the highest I measured all trip; terrific work! So, how was the ride? Well, I was seated in the back row, and as I said yesterday, it's not my favourite coaster; it's OK, but I do find the flying position inherently uncomfortable, and I'm also not a fan of the fly to lie, where it dumps you on your back for a sustained period. With that being said, however, the ride did feel a bit faster on the back, and bits of the layout itself are really quite good fun; it's just that I don't particularly enjoy that flying position at all: 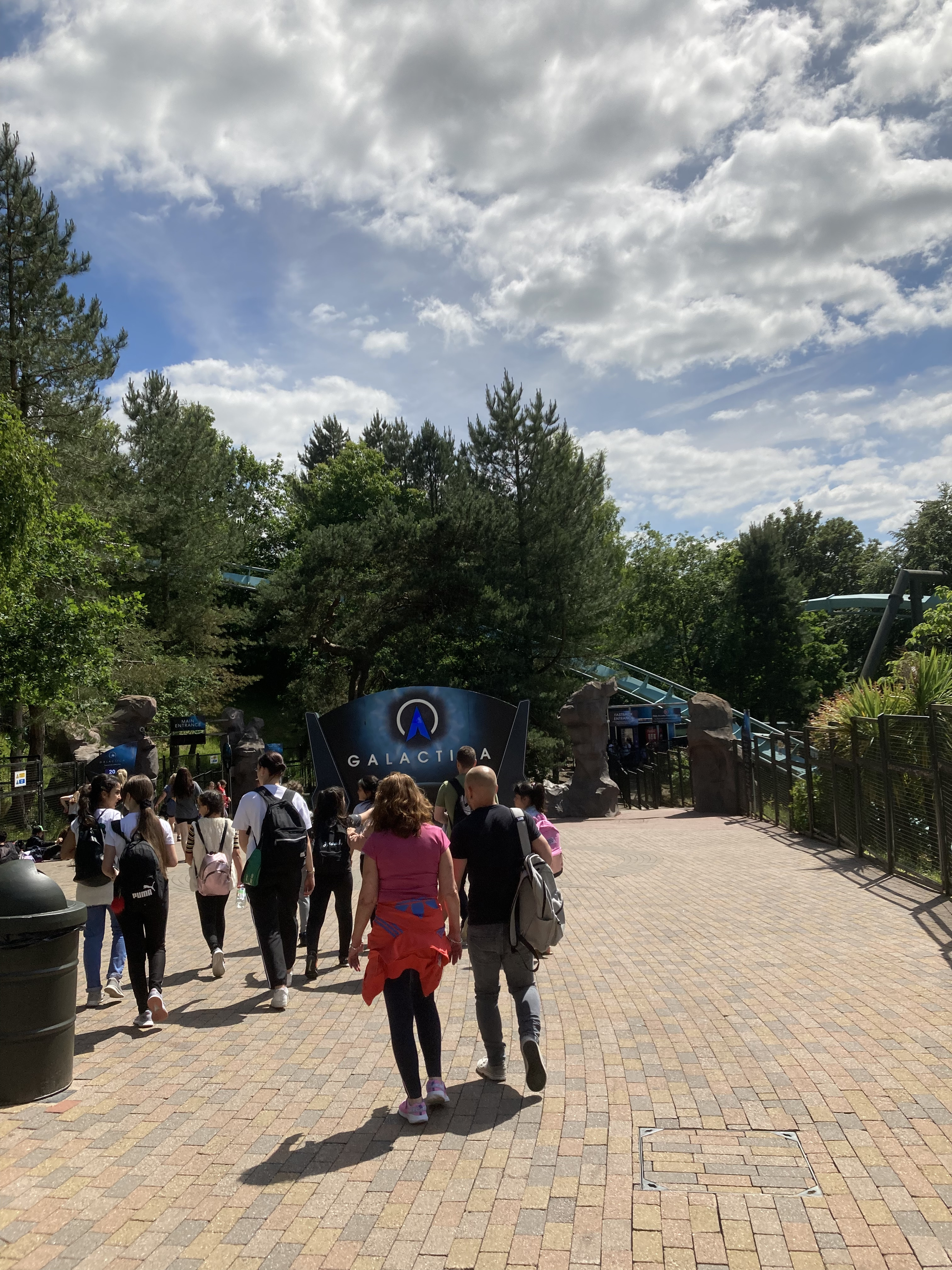 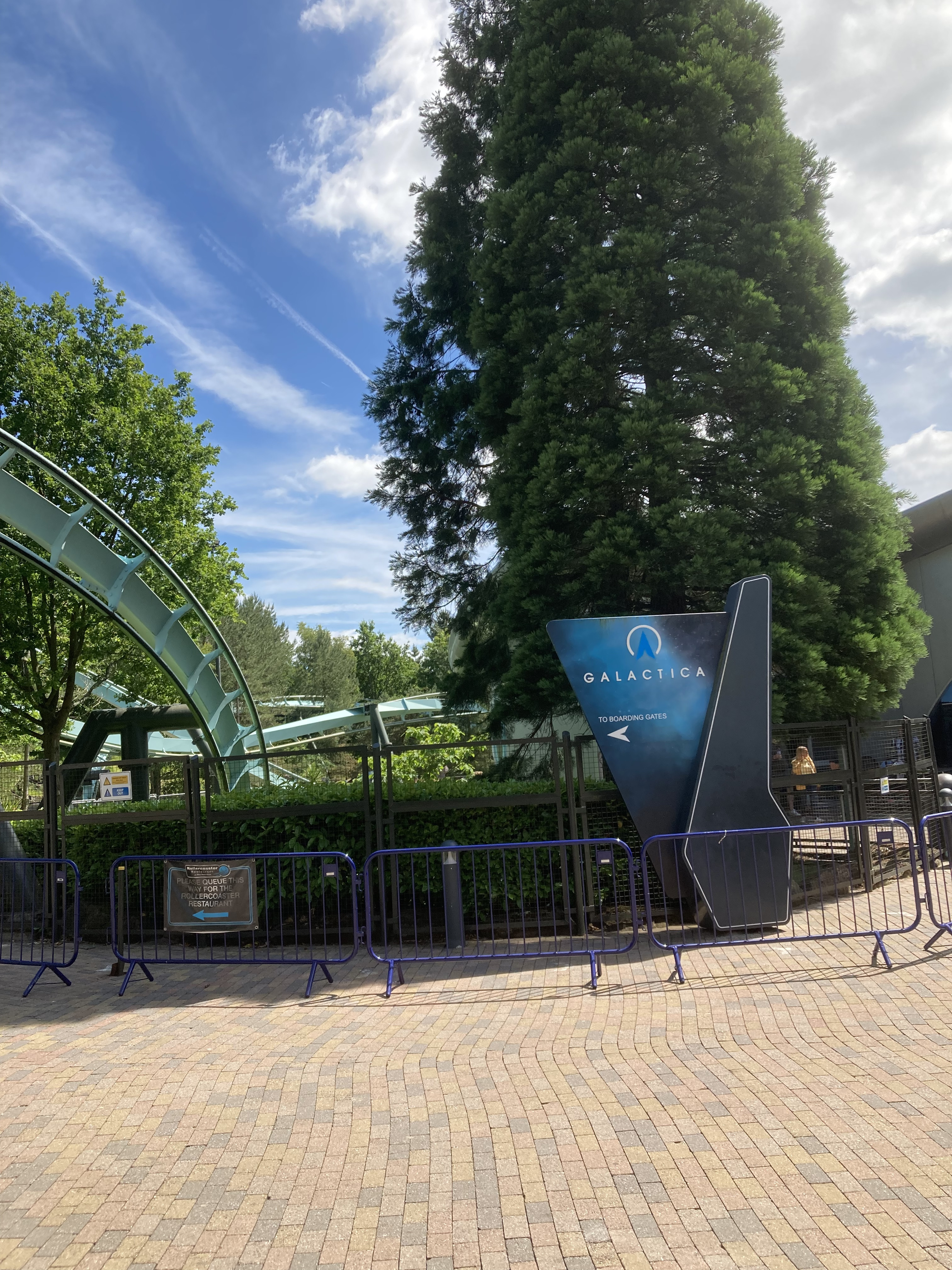 After Galactica, it was getting on for 2:30pm, and my mum and nan were wanting to head home. As such, we headed out the hotel entrance and closed out our day there.

So in conclusion, we had a brilliant Alton Towers trip! It was great to get back to the park for my first 2022 visit, and I had many great rides! In particular, Wicker Man delivered as well as it ever did, with some of my best ever rides on it being had this trip, Oblivion was awesome, and Thirteen has gone up a fair amount in my estimations; it was unexpectedly brilliant this trip!

Thanks for reading; I hope you've enjoyed my reports!