It feels like half of the European coaster community has decided to venture over to Poland this month, following the opening of that small coaster Hyperion, and with rapid expansion taking place at the two major Polish parks - Legendia and Energylandia. But how do they actually fair?

We flew to Katowice on a Saturday evening, arriving at our hotel late, giving us the perfect opportunity to arrive at Legendia Sunday morning. Legendia is based in Silesia, an old mining district of the country, and now in the process of truly being redeveloped into a tourism hot spot (indeed, around the area are plenty of mining headframes which have been turned into prettier sites!). With Legendia being bought by a new owner a couple of years back, it's clear the park aim to capitalise on this.

To our surprise, Legendia is very much a city park, literally just based off a main road through the city, and all the surroundings just being standard city stuff. Interestingly, the park operates a one-price ticket system, for 99 zloty (about £20). However, you're only allowed to leave for 15 minutes, and if you want to return after that, you need to buy a new ticket. Clearly a tactic to keep people in the park as long as possible, eat on park, etc. The park also has VERY good opening hours (minimum 10am-8pm, with park gates opening between 9 and 9.30), meaning people can pop in at various hours of the day.

The park opens with a little show, where kids are handed out free sweets and balloons and encouraged to take part, whilst adults are given free fudge!

The park has 4 coasters - two Zyklon Galaxis, a Soqeut looping coaster, and Lech, a new-gen multi-looping Vekoma. The Zyklons are bog standard, with some okay facades, and the Soqeut was closed due to it being rethemed for next year (plus the track looked in HORRID condition). So let's get down to Lech...

Lech is mental. The layout features a very steep drop (maybe even beyond vertical, I couldn't really tell), 3 inversions (one going through the station), plenty of airtime, twists, turns, and is partially over water. It flows so well, is incredibly smooth, the airtime is fantastic, and the vest restraints are surprisingly comfortable (and feel almost necessary with the amount of airtime you get!). And, finally, the first drop and inversion is intense. Extremely intense. I greyed out on every ride I did. We did 2 rides back-to-back, and that was a mistake as I felt quite wiped out afterwards. It's at a point where it's arguably too intense, as it put me off wanting to re-ride it too much. Nonetheless, it's still a fantastic ride, a truly brilliant investment (just over 4m euros) and something which has put Vekoma back in people's attentions, and rightly so. 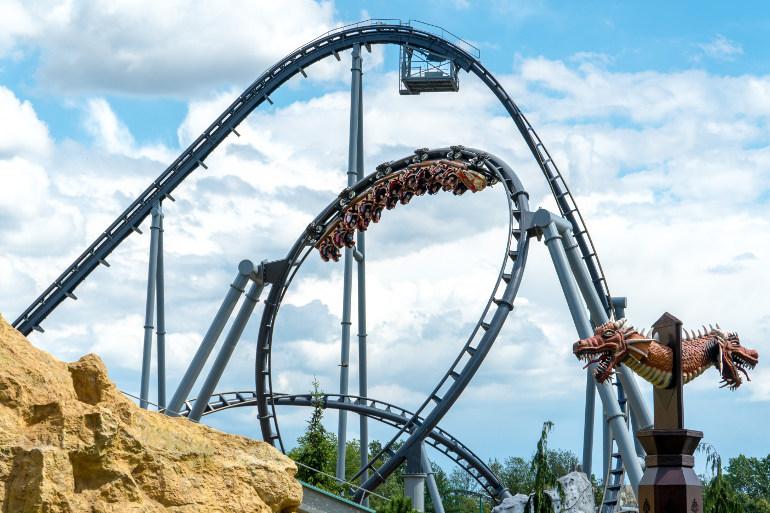 The park's new for 2018 ride is a shooter dark ride. Themed around a house with lots of monsters, where a Basilisk has escaped. Trackless, and a combination of work from ETF, Alterface and Joravision, this is actually something very special. The queue is spectacularly themed. The ride features interactive sets and screens, which is transitions between very well. The shooting aspect isn't the only focus of the ride, with some story driven points too. It is genuinely astounding. There are a couple of minor issues though - it's never really explained that you have to hit targets multiple times before they are destroyed (I only realised this mid-way through my second ride!), and some of the real theming looks quite basic, and thus tacky and out-of-place compared to the other.

Aside from that though, this is a true winner of an attraction, a real gem, and one of my favourite dark rides! 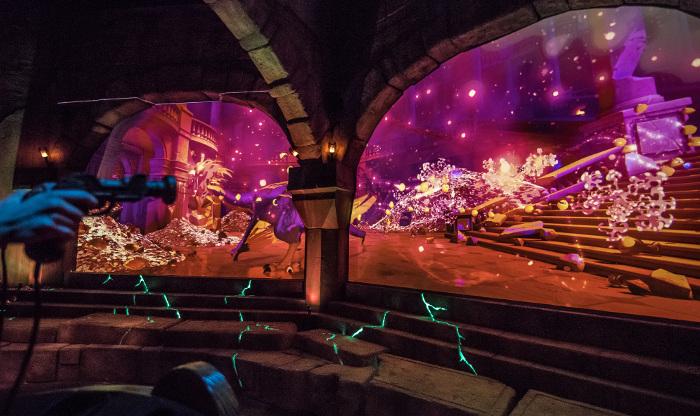 Dragon Riders is bloody mental. I have no idea who designed this ride, how many of these there are in the world, or any general clue really. But I imagine anyone who's thought "this is a good idea" has been on some hardcore drugs. 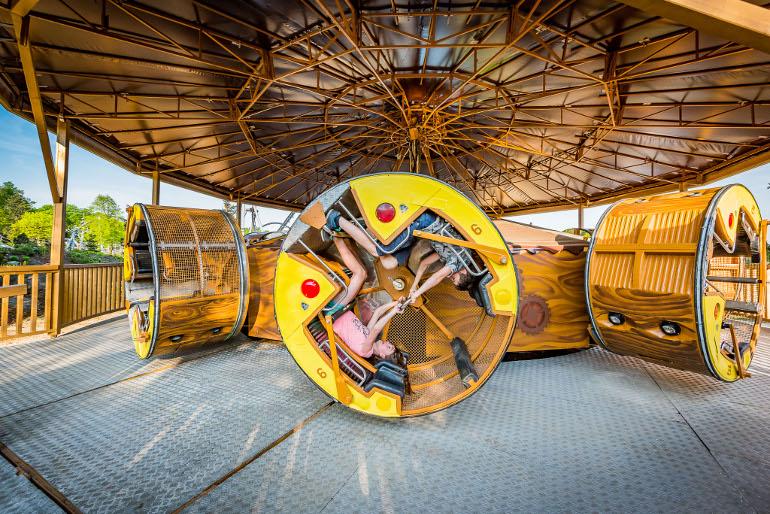 To try and explain the ride. You sit in your pod, with nothing more than a - rather loose! - lap bar to keep you in. You then start going round in a circle, like you would in a carousel. Your pod then starts to spin / roll continuously. Think of Slammer, but faster, in a smaller radius and for a lot longer. You do this for a while, then go in the other direction. And this lasts for about 3 minutes. Due to the loose lap bar, you bounce around in your seat, getting slammed every single way, and it's just general sickening. And unlike with many spinning rides, this doesn't have a 'warm up' period - it just seems to go straight to max speed!

I felt queasy for a good few hours afterwards. I'm not a huge fan of spinny rides, so I knew it would leave me feeling meh. But with something this insane, you have to try. You may regret it after, but you have to try it.

The rest of the park is pretty average to be honest. They have a log flume / boat ride thing which has terrible throughput, has staff specifically instruct you to brace yourself on the drops so you don't slam into row infront, and is generally a burden to ride, but has decent splashes. There's a few other funfair style rides, run incredibly well, but nothing that stands out.

We ate at one of the newer restaurants by Lech, and the food was decent and well priced (I believe I had a main meal, drink and dessert for about £7.50). And you do get wonderful views of Lech too. Speaking of food though, one thing which really stood out was how they didn't serve any snacks or bottled drinks at any of the shops - they were only at the food places. And the food places had very long queues from 1-5pm. The park, surprisingly, has lots of shops with lots of ride merch though!

Two things really stood out to me with Legendia.

1) This park isn't a full day park. The park was, admittedly, very quiet when we visited, but even when busy, I can't see you needing more than a 10-6 day at the park. Given how the park's ticketing works, this is a bit disappointing, as it means you can't enjoy the park at it's opening and at it's closing (ie - night rides) without either buying two tickets, or having a very boring lull mid-way though the day.

2) Legendia has a future, and a very bright one at that. The park has a fantastic infrastructure and is clearly set up to hold a lot of people (Lech and Basilisk's queues were HUGE too). All the staff we interacted with spoke perfect English (and they even have flags with what languages they can speak on their name badges). They've got a fantastic entrance area. They know who it is they want visiting, and they know how to attract them. The thing that's missing at the moment is quality. Lech and Basilisk fill two very obvious holes, and have done so quickly and reasonably cheaply. A new water ride is coming in 2020 (hard to know what it could be based on the location, but a proper log flume or rapids would suit the park perfectly right now). And with the new ownership, they've clearly got the money to be able to bring in the new, high-quality additions.

So yeah, give this park 5 years, and I have no doubts they'll have a solid line up with some great filler attractions. In 10-12 years time, though, I really do see this having the potential to be one of Europe's most charming, most fun parks - a real gem in the making!

We left the park at 5-6ish in the end, after really dragging out the day. We spent some time exploring Katowice (and sadly, basically nothing was open because the Sunday we visited, EVERYTHING WAS CLOSED), and then got ready for a day of Polish culture...coming to a blog post near you soon...