After a day spent doing some random stuff in Berlin, the weekend was the main reason for the trip: the two random small parks just outside Leipzig. The first one was Belantis; a medium-sized park owned by Parque Reunidos (who also own the likes of Movie Park Germany, Bobbejaanaland, Mirabilandia,...). It was sadly an extremely wet day, with showers pretty much non-stop from about 8 in the morning. Fortunately, it meant the park was dead, and the park didn't close anything major in the weather. So, moving on...

Arguably the park's headline attraction is Huracan, a Gerstlauer Eurofighter which opened in 2010, but was largely retracked this past winter. It rides as you'd expect a Eurofighter to ride really: fun, little bit uncomfortable, but nothing extremely intolerable. It has a nice unique layout, but doesn't really have any stand out moments. So yeah, in short: a fun enough but somewhat bland experience. 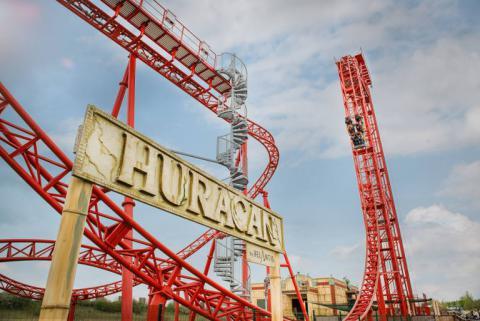 Fun fact: Belantis also opened up a kiddie coaster called Huracanito, a ride where you have to be less than 1.2m tall to ride! tbh, it looked too intense for me.

The park's newest coaster is a Gerstlauer family coaster. Themed around a snake belonging to the Egyptian god Ra, this had a surprisingly nice indoor queue which was rather well themed. The coaster itself was actually really good: nice and whippy, well paced and you get two circuits on it. A nice surprise coaster! 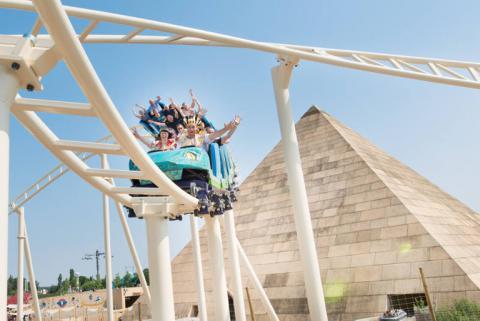 The park's final coaster is a Gerstlauer (see the trend?) bobsled, and actually a mirror clone of Paultons. Having not done that yet, I didn't know what to expect, but it was a ton of fun, with lots of fun pops of airtime, and a nicely themed experience! Again, a really fun ride.

On paper, the park has a nice selection of non-coaster rides too. The true highlight has to be Fluch des Pharao, a log flume ride with Stormforce 10-style boats, which takes you into a 31m high pyramid. Though not very wet, the ride has a few quirky tricks, is nicely themed inside the pyramid and caught me off guard a couple of times. Very much a typical 'wtf' ride you'd find in Europe! The park also has a Gerstlauer sky fly in Götterflug, though I didn't see anyone manage and flips (hard to tell how much the weather played a part in that) and a random pirate drop tower that sways side to side which was equally very fun. There's a lot more too (including a random mini zip line which is free), but it's all pretty bog-standard and not worth mentioning.. 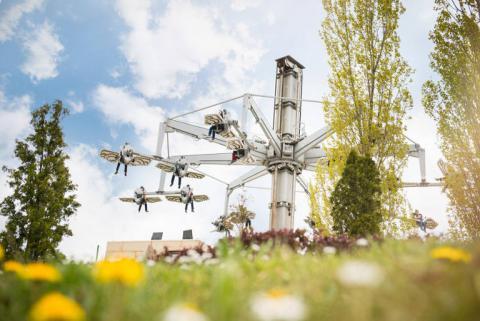 The park has one major dark ride in Verlies des Grauens (Dungeon of Horror): a madhouse ride which very much feels like it could be taking place in a dungeon. Of course, madhouses in a foreign language can be difficult to grasp, but this hasn't stopped me enjoying some out there, and with my basic German knowledge I was able to get the gist (some sort of crystal had been stolen and it relates to the wizard Merlin and only we can get it back or something). But even with that vague context, the madhouse portion was weak: very little seemed to happen, and it was all rather unimpressive, and probably the worst madhouse I've done. Even if I'd fully understood the story (I think the madhouse section is something to do with guests being tricked by the supposed good-guy in a massive plot twist), I doubt I'd have enjoyed it much: everyone around us looked rather unenthusiastic.

This is probably making Belantis sound like a pretty alright park, but honestly, it was very mediocre. No doubt the bad weather didn't help, the lack of people on park and the fact I bruised my ribs the days before and was in a reasonable amount of pain probably detracted from my fun even more. But really, the park just didn't feel like it had much to offer. The Eurofighter isn't something anyone will really be clambering to re-ride. The family rides are fun but pretty standard. And whilst some rides are nicely themed (in particular the newer ones), the park as a whole is very devoid of anything fun and interesting to make you feel like you're at a theme park. When the park has such an average line up, that doesn't help.

One final thing though: the staff on park were fantastic. All very friendly and helpful and super upbeat despite the weather. They were all really chatty, most spoke good English too (handy when my German failed me!), and just in general made the day a tiny bit brighter. So that's always nice to see.

The park closed at 5 (though staff were telling us they were considering closing early due to the weather and lack of people), but we ultimately left at 3ish to dry off and prepare to spend the evening in Leipzig. Before heading into Leipzig, we stopped off at the Völkerschlachtdenkmal, which is a monument to the Battle of the Nations, and stands at an impressive 300ft tall. You can pay to enter, but we just had a look around the outside. We wandered around Leipzig for a bit, had some food, then ended up going to a bowling alley near our hotel on the outskirts of the city centre. The city was heaving following a football game, and we quickly found out that Leipzig was quite a 'hipster' city, leaving us with little to entertain us really. 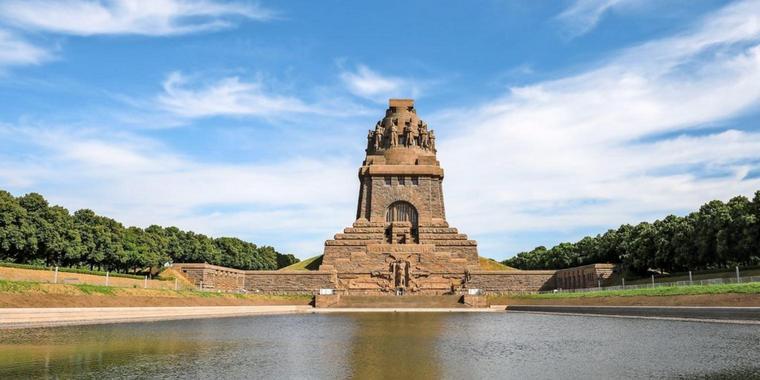 So yes: Belantis left me ultimately unfulfilled but equally, I wasn't surprised. Leipzig is a bit meh too. Could Freizeitpark Plohn save the weekend? Find out soon...

NB: all pictures stolen from online as my phone hated the rain