For the first time in like 2 years, I've actually finished a trip report *dies of shock*

Plohn jumped into my attention because of their new Mack Big Dipper, Dynamite, bursting onto the scene. We thought visiting in mid-May would be safe enough for the 'Spring opening', but sadly we were 6 days too early. Major spite. Nonetheless, it looks good and I'm sure it'll be a hit for the park. Onto the rest of the park:

A GCI woodie that opened in 2009, El Toro was a curious surprise for the trip. It's tucked away in the corner of the park, and though you don't really see it, you can certainly hear it. And even when you do see it, you don't quite realise how long it is, and how much it packs into a small space. It has a fair few airtime moments, which are all 'nice' and 'floaty'. It twists around a bit and has a nice bit of interaction near the park's log flume too. But ultimately, there's nothing particular interesting about it: it's just a bog standard, run-of-the-mill woodie. 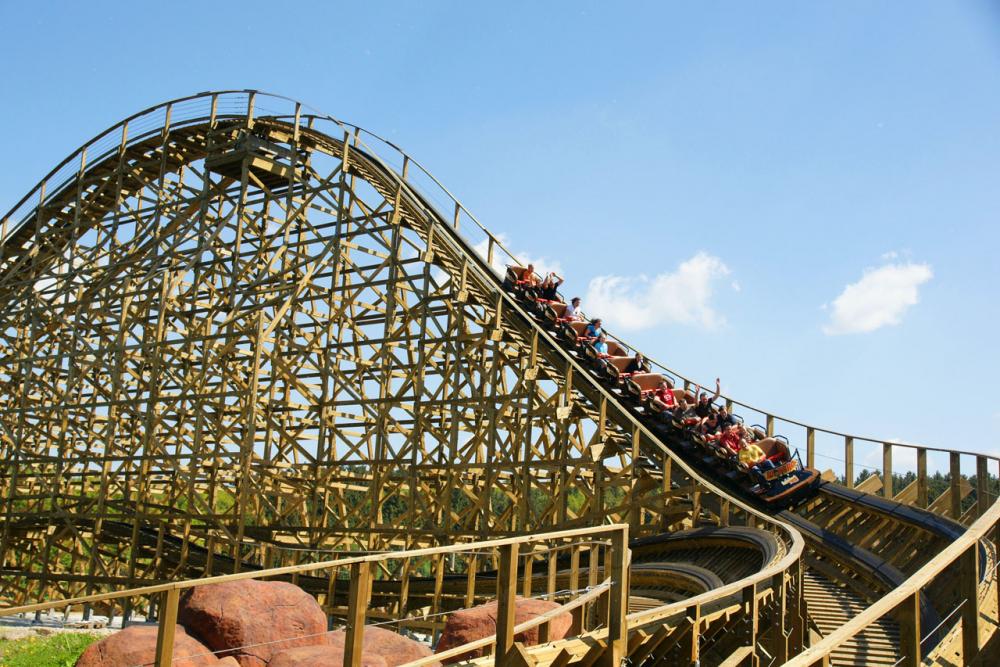 Miniwah and The Secret of Gold Creek City

Now this was a surprise! Miniwah is an indoor Mack powered coaster, with a custom layout. Set in the park's wild west / mining area, the entrance is tucked away and, thanks to the facade, it'd be easy to think that there wasn't a ride in there at all. The queue is really well themed and surprisingly atmospheric.

The ride itself is fabulous as well. The ride does 3 laps: the first lap is taken incredibly slowly, and gives you a tour around Gold Creek City and it's mining area. The second lap speeds up as it becomes clear the mining area is about the explode. The final lap is then taken even quicker, with the mining area fully exploded and causing havoc throughout the city. It was beautifully done, and a really interesting way of using a powered coaster. 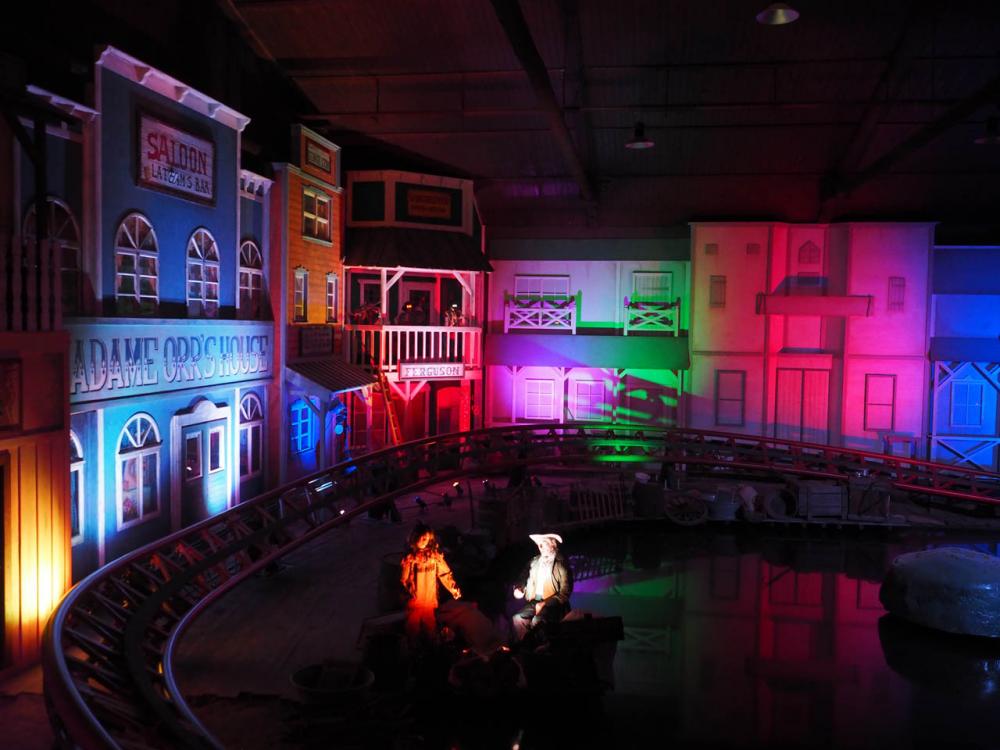 As from that, the park have 3 other coasters: some Zierer over water which was painfully slow, a Wacky Worm and an SBF spinner, all of which aren't worth me trying to find the names for and simply were coaster counting.

The park have a surprising decent dinosaur/prehistoric themed section of the park. It features a family spinning drop tower (themed like Tikal), a raft tow boat ride around a lake with some dinosaur and caveman-like statues, and some pedal rafts on the same lake. This part of the park is away from the rest of the park and in dense woodland, which really added to whole vibe. Looking at the park's website, some of these rides are named after the Flinstones too, though I didn't notice this, and I'd be very surprised if there was any official tie in... 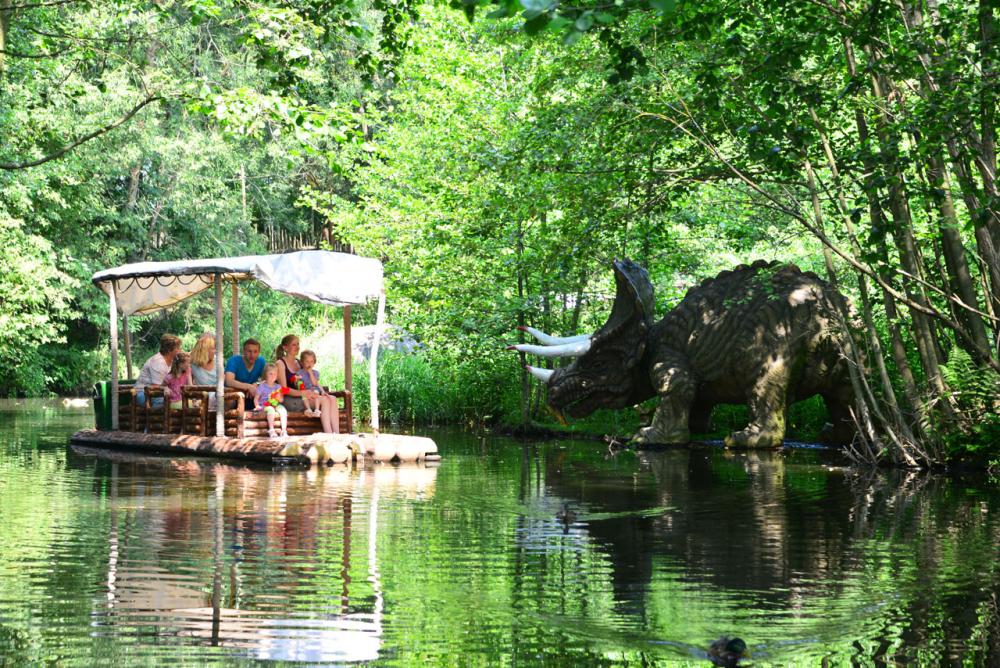 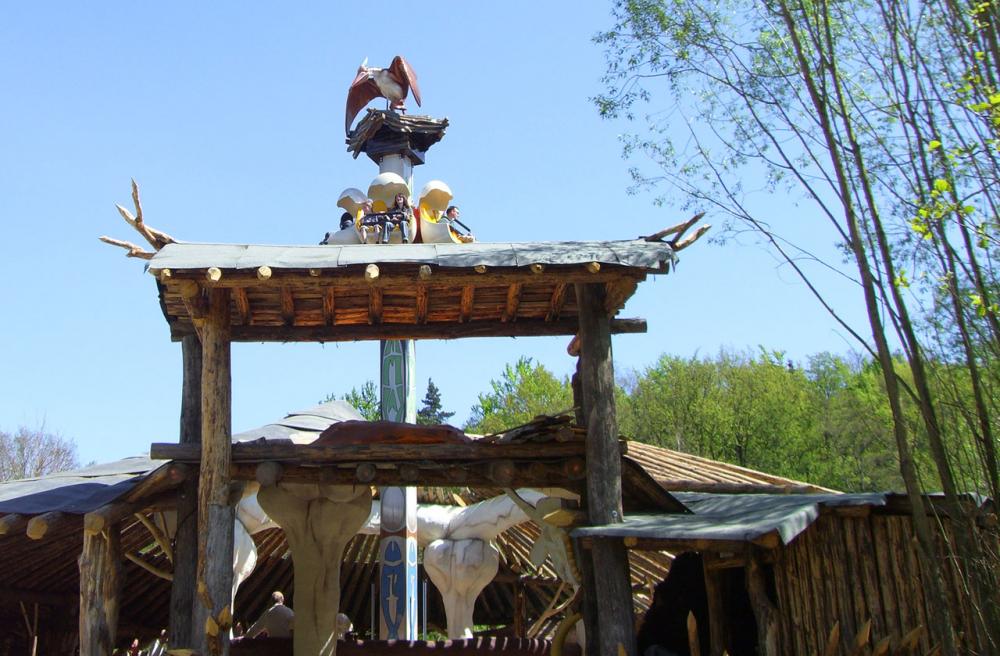 The park also features typically European stuff, like a random un-manned funhouse area with some really fun slides (and like 5 floors tall), and a Efteling-inspired Fairytale forest which was pretty rubbish tbh. There was also the 'Ghost Mill', which was a haunted walkthrough attraction which was basically hidden by the log flume. You would basically walk through the building and certain effects (loud noises, wobbly floors, etc) were triggered. It was odd and different. 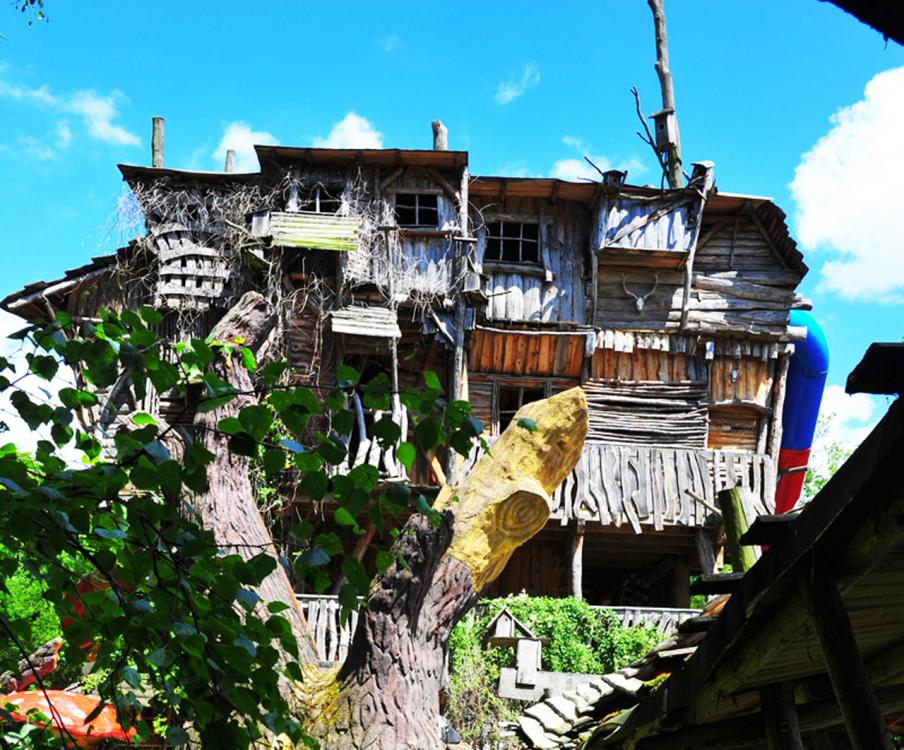 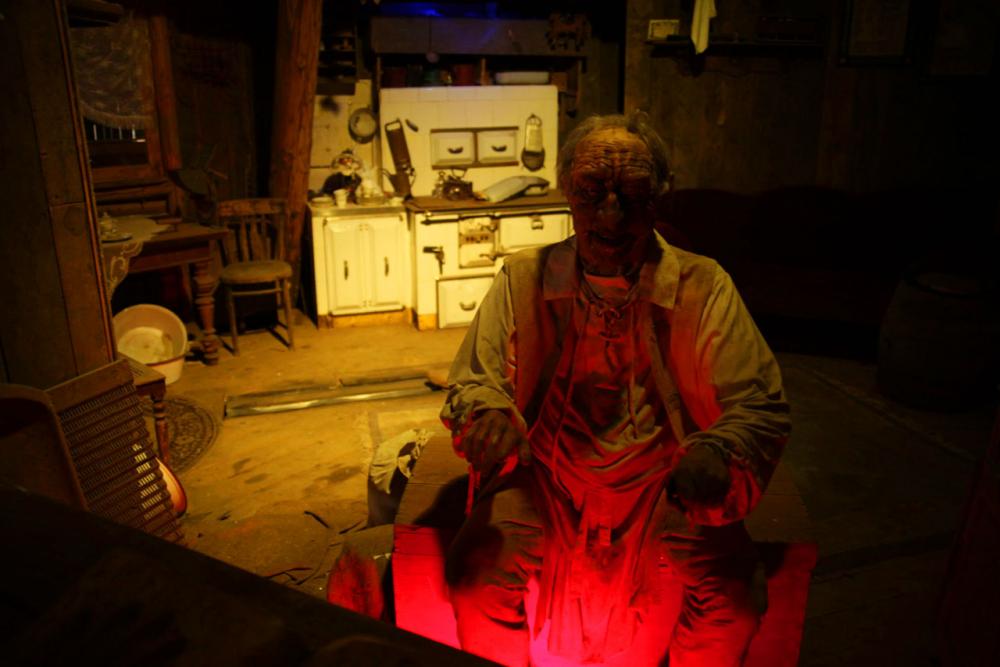 Probably the highlight of Plohn for me is the park's two water rides. Firstly, there's their log flume, Wildwasserbahn mit Geiserbahn (literally Log flume with Ghost Train). The ride starts off in a dark tunnel, which I guess is meant to be the 'ghost train' of the ride. It wasn't scary at all, just very random. The ride then goes outside and just does standard log flume stuff, interacting with the woodie, itself and the surrounding area, and features a couple of fun drops. It's nothing special, but just done well and a ton of fun, which gets you the right amount of wet. Log flumes, great rides ey? 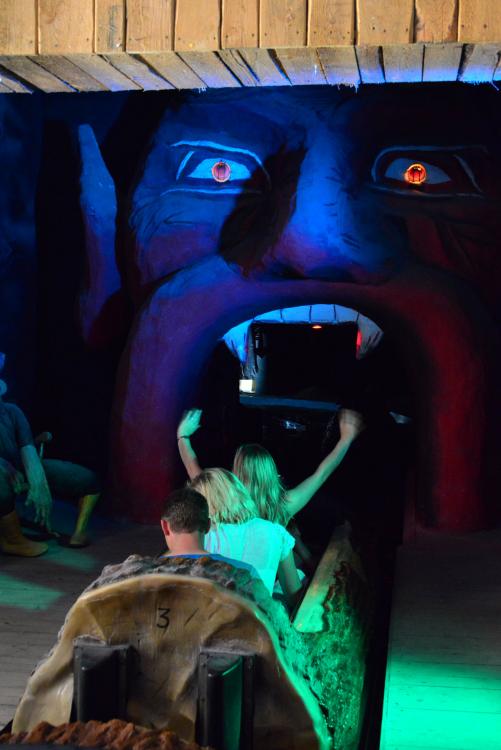 And finally, the highlight of the park: Fluch des Teutates. This is a ride very similar to Storm Surge: you sit in a raft, climbing up a low lift hill, and spin down a slope. It's obviously by a different manufacturer (no idea who), as the boats are like rapids boats rather than dingies, and a slightly different layout for the drop. In particular, during the drop, there are 'mini drops' which give little extra pops to the ride, and splash you. Simply put though, this ride is crazy: the boats spin a ridiculous amount on the way down, you get a good level of wet and it's just a ton of fun. It's a really unassuming ride, and just a fantastic surprise package of a ride. 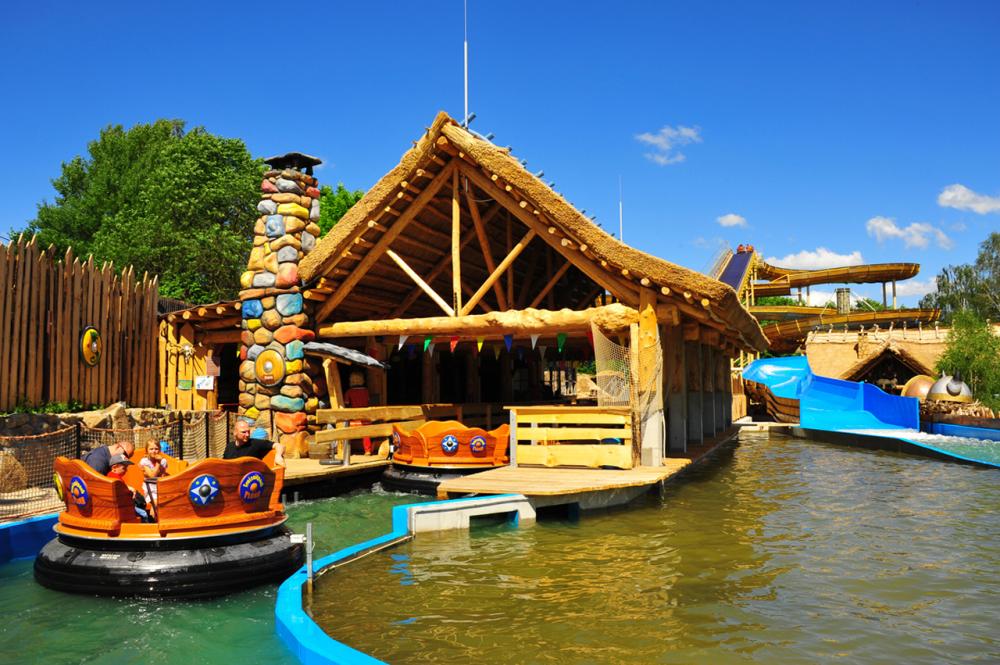 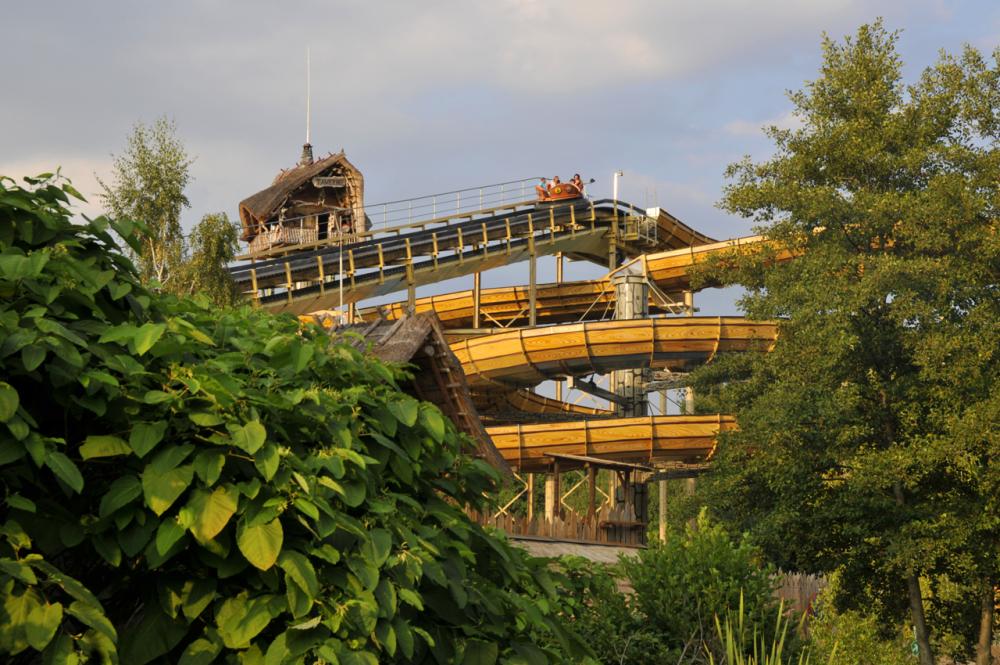 So yeah, that's pretty much Plohn in a nutshell. The park wasn't busy at all (it was Mothers Day in Germany, so I can't tell if that should have made it busier or quieter). But we never saw El Toro have a full train. Staff at Miniwah seemed genuinely surprised when they saw us arrive in the station. The park felt really dead, and even going slow and doing lots of rerides, we barely managed to stretch the day out to 5 hours. The park felt very fairgroundy in places, which was a shame as well, given they've got some nice theming scattered about. It's in general a shame, as I thought this Plohn could be a park I'd really like, but I ended up feeling very flat because of it. And, even worse, that means I probably won't ever return to get Dynamite...gah!

And yeah, that ends the theme park side of the trip. We spent the Monday exploring Berlin, and tbh, it was a very meh city for me. It felt very 'European' and not very 'German', which is totally fine, but as someone who likes Germany and wanted to explore more German-feeling stuff, it was a bit disappointing. I did try a Berliner though, which is sort of doughnut, hence the imaginatively named trip report..

So yeah, Berlin isn't the best trip for a theme park run right now. Belantis and Plohn are very meh and offer little. It says a lot when a strawberry farm is the best place for coasters near Berlin (though the strawberry farm is brilliant and should be visited if you're ever near Berlin..). But yeah, ticked off a few creds at least..