After visiting Walibi Holland last week, I got to do an attraction that I've been keen to try for quite a while now...NeuroGen.

For those unaware, Walibi Holland is quite an..in your face park. They quite clearly are targeting the young adult market, and are unashamedly brash. Think of what Thorpe was doing in the early 2010s with the 'fatheads', except not quite as awful, and with the balls to follow through and stick with it. Their current slogan of #HardGaan (Go Fast) keeps in line with that, and you regularly see 'F#CK FEAR, HARD GAAN' plastered around the park. They're not a park to shy away from doing something extreme, as seen from the likes of Untamed.

In 2016, they introduced a new, critically acclaimed, alone-experience to their Halloween line up: The Clinic. The Clinic sees guests visit a hospital, before quickly being strapped to a gurney, and having the rest of the experience take place strapped to said gurney. In 2017, the park introduced a year-round spin-off of the attraction: NeuroGen. Here's how the website describes the 16+ experience:

NeuroGen is an intense virtual reality (VR) attraction. By means of a VR Headset, Motionseat, special effects and intense (possibly confrontational) video images you undergo an intense trip through the human brain.

So far, all pretty standard wording and hype for any scary attraction. But equally, this is a good (albeit roundabout) way of describing the experience: it's like a 4D cinema, except with VR headsets (which is actually filmed and not CGI) instead of 3D glasses. Oh, and you do it alone. 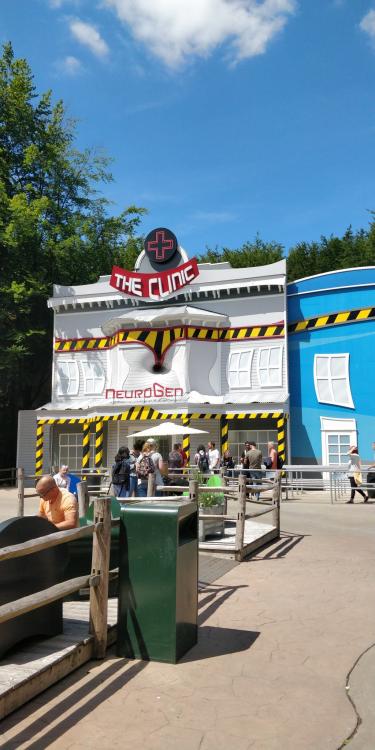 You wait outside the building and are taken in one-by-one. You're guided into a hospital waiting room, told to walk through a door and someone is waiting for you round the corner. A walk through a corridor with some special effects (loud noises, bright lights, mist) eventually leads you to a very bright, very clinical circular room, with a doctor to greet you. You're asked to select a treatment ('beach' or 'waterfall'), and then one of 12 doors around the room opens, which you're told leads to your treatment room.


The treatment room is equally bright and clinical. Rather small, and all that's in it is the chair with VR headset. It's here where you get the first taste of of the story, explained to you by another doctor: this clinic helps improve your brain power, by means of accessing your memories and showing them back to you through the headset. As the headset is put on, you're warned it can be quite surreal, so if it gets too much, take the headset off and if you leave it off for more than 5 seconds, the experience will end. You're also encouraged to look around so you can see your memories from a different perspective, etc.

Of course, it isn't that cheery. The first memory shown is your own; the beach or waterfall that you first chose (I choose waterfall). After a few seconds, though, things change: an automated voice rings out saying there's a problem, and that you're being given someone else's memories. What follows is a whirlwind story of someone's young life: highlights include being born, playing at the playground and doing PE at school. But none of these are happy memories: you always end up crying (you're bullied at the playground and school). But someone's always there saying "I won't let anything bad happen to you" (your mum, a friend, etc). And all this time, the chair is gently matching your motions - for example, you're on a seesaw at the playground, so the chair reacted the seesaw motion pretty well.

Fast forward further, and now you're going into a nightclub with your girlfriend. A friend of her's gives her a couple of pills, and of course you take one. Things start off okay, though a gentle mist sprays onto your hands / around you (I imagine to mimic sweat). Things then start getting trippy: things slow down, then speed up. You start losing balance and falling to the floor (and again the chair mimics the motions). You start to hallucinant and really go down the rabbit hole. I've never taken drugs before, but yeah, I can imagine this is what a bad trip would be like...

After blacking out, you re-awake in the back seat of a car, next to your super-panicked girlfriend, with her drug-giving friend driving. "I won't let anything bad happen to you" she says, reassuring you that we're going to hospital. She then fights with the driver, which causes the car to lose control and go flying off a bridge, with the waterfall from the start in the distance. At this point, the chair violently shakes, and again, really mimics how I imagine a horrifying car crash could be. The car crashes into the water with one final shake, and slowly fills with water, at which point you're sprayed with mist around your arms and face, to show drowning. Once again, you black out as the chair tilts backwards.

You're then jolted awake: you're on a gurney, a medic shout clear and trying to revive you. The same happens again. But still you fade away. And the film ends. You see the room you were in again through the VR headsets, and an automated voice saying the treatment has been a success, with your brain power improved by some ridiculous percentage. A doctor comes in, removes your headset, and asks of you enjoyed the treatment, before escorting you away.

For the tl;dr version: basically the VR film shows you taking drugs, tripping out, being in a car crash and drowning. And, what's remarkable is how realistic it felt. I haven't experienced any of those phenomena, but it certainly felt like this was as close as I could get to it without experiencing it. And that made it pretty hard-hitting. It's a very different type of scare experience, and one which I imagine could really affect some people. It's pretty dark, and pretty bleak, which I guess makes it all the more appealing for me. The fact this is a solo experience really adds to it as well.

So yeah, easily the best executed VR experience I've done, and something really rather out there too. It's brilliant to see these sorts of experiences offered in a more mainstream setting, despite being for a very niche market.