A cryptic wheel cover and demolition of a bridge, followed by markings on the ground.  A pIt of concrete footers.  Then a coaster.  Even after watching the project for well over two years, it feels surreal standing next to the twisted metal track of Icon and seeing the trains swish around what was previously a lake.

Visible from many locations within the park, Icon makes its presence known simply by being there.  It may not be tall, but in terms of land covered it’s HUGE.  First impressions heading up the ramp seeing the Immelman looming up ahead are impressive, but the approach from the ride entrance side is the money shot.  It’s such an impressive sight with the huge entrance structure, glorious soundtrack playing and the smart gold trains whizzing around you and other rides at the park. 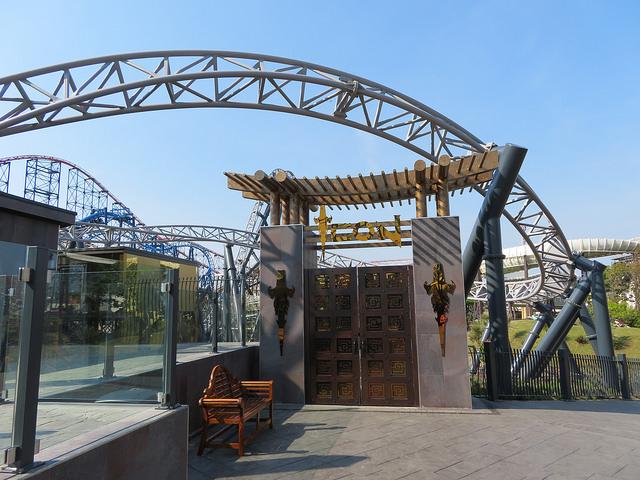 The queue line is fantastically landscaped with amazing vantage points to watch the ride, and whilst relatively short manages to catch various sections of the ride’s amazing soundtrack.  It really is sublime standing there, hearing the launch audio, and seeing a train full of excited riders slowly exit the station before the train is hurled through swirling mist and into the tunnel. 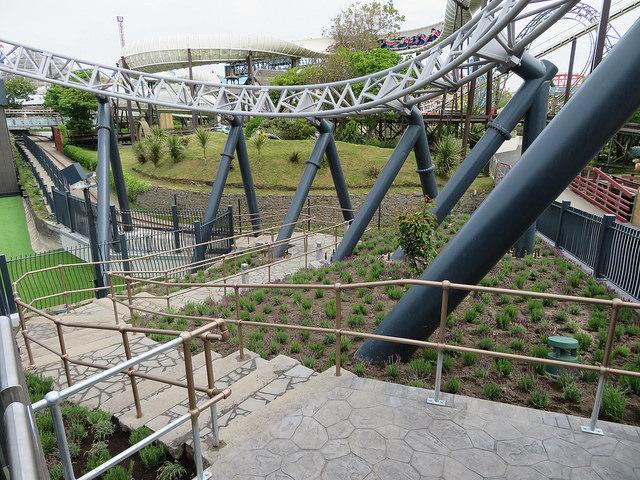 Yes, they have finished the fence now!

Decorated in style, the ride features various elements of theming such as a garden with named posts of those involved in the project, a small water feature, mist effects and a nice entrance area/viewing platform.  Given that Pleasure Beach is an amusement park at heart, I have to give them credit for putting so much effort into the overall experience of Icon, it has really paid off and creates a unique atmosphere around the ride. 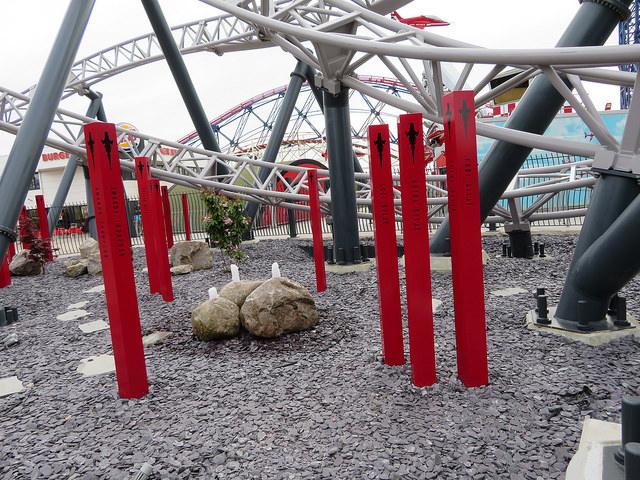 Entering the station, the soundtrack hits you like a ton of bricks and does a great job of building the hype - alongside the class decoration, lighting and mirrors, it’s one of the best atmospheres I’ve ever felt inside a coaster station.

But… is it any good to ride?

The excitement builds as you dispatch from the station, with the launch audio gradually getting louder before launching you towards the mist-filled tunnel with “IIIIIIIIIICON” ringing in your ears. 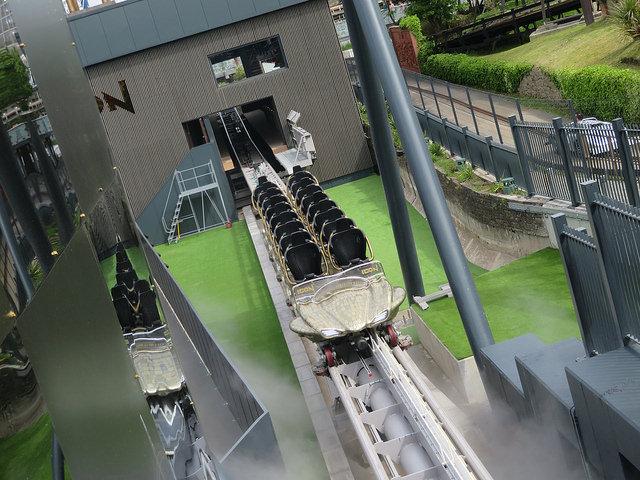 Flying through the misty tunnel, an almost dream-like moment of obscured vision is followed by entering the top hat element completely disorientated, before cresting the hill and being treated to one of the best airtime moments I have ever known on a coaster.  On the back, you crest the hill slowly before being thrown out of your seat on the way down, whilst there is some ejector as you crest on the front. 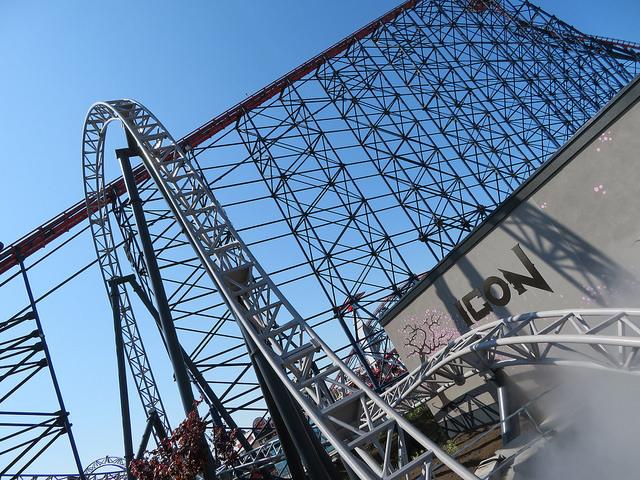 Diving through the garden for the first time, you enter the inclined loop before swerving to the left, right, then diving underneath Steeplechase and Big Dipper.  Whilst I didn’t feel the near-misses on-ride as much as I expected, it’s an engineering masterpiece to fit the track there and the S-turns provide some fun forces before you are taken back over Steeplechase into what I found to be one of the best elements of the ride.

The heart-line roll offers a completely different sensation to the beginning of the ride, creating a stark contrast.  From fast-paced ground hugging turns, you are taken into some ridiculously comfortable hang-time – the amazing Mack restraints are really used to their potential here, allowing you to hang freely (but comfortably) for a second before “catching” you and throwing you into two small and sudden moments of airtime.  Leading you back through the tunnel of mist, I found the two small airtime hills followed by the second launch to be a highlight of the ride. 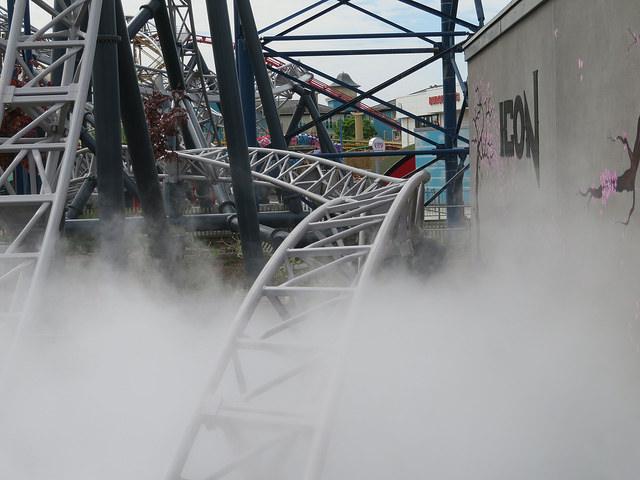 With the station and surroundings a blur as you fly past them, you enter the Immelman.  It’s quite something seeing The Big One essentially turn-over, and the element is a lot of fun at the front – at the back, it’s quite simply one of the most insane moments on any coaster.  You’re taken from ascending what feels like the start of a loop to hang-time, then ridiculous “sideways-airtime” as you come down the drop, before being thrown into a steeply banked Stengel dive and then into the turn.  This is one of the perfectly executed moments of Icon. 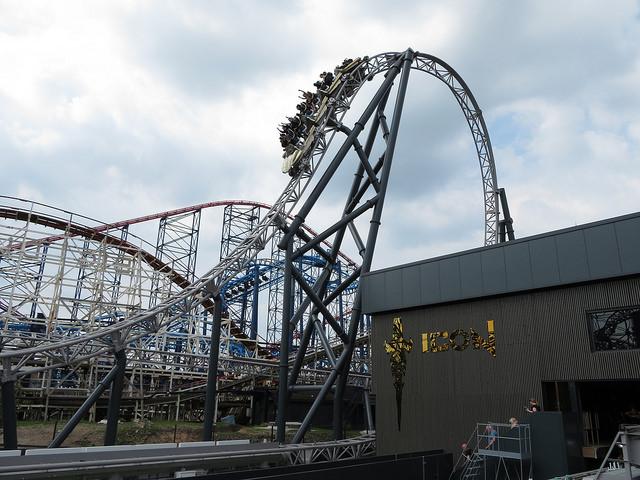 Coming out of the over-bank and into the airtime hill, you are thrown yet again out of your seat before twisting onto your side into a tight helix.  I found the force to be decent here, with a good view of the theming if you’re sat on the left-hand side of the train.  Forcing you out of your seat yet again, you twist over to the right to take a majestic dive over the ride’s entrance area before entering yet another unique element. 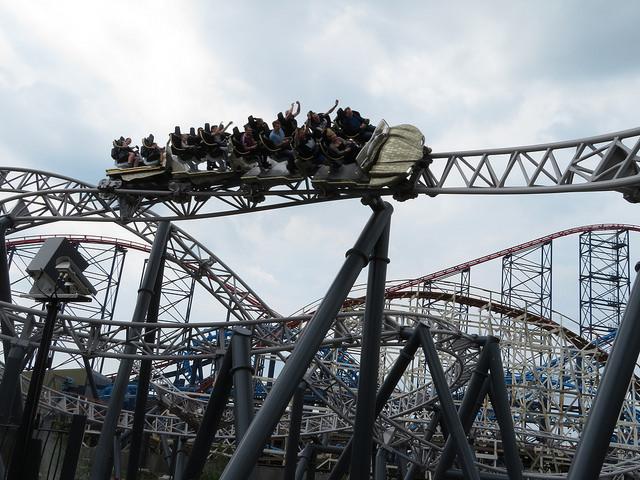 Wonky-airtime.  Yep, Icon has it.  You’re taken into an off-banked airtime hill, giving the impression that you’re going to be thrown into the totem poles (a fantastic throwback to the park’s past for those who remember, btw!) before meandering into the high-five element and slithering back into the brake run.  The high-five element felt quite weak to me; it’s very clever and a true engineering feat, but it didn’t have the impact or sensation I thought it would as a ride experience… although with the Icon exit music becoming audible as the train hits the brake run, I soon forgot about that! 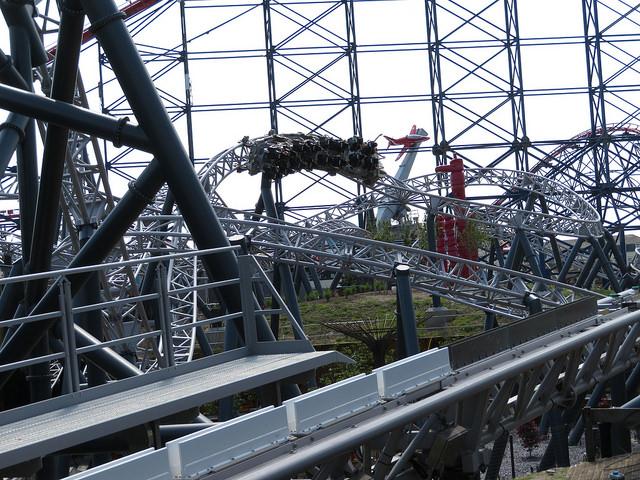 After my initial rides on Icon I was unsure but having let the coaster properly warm up, it has become a firm favourite.  To me, it’s the definition of a perfect coaster; it’s long, has a number of unique elements, isn’t inversion focused (yet still has two perfectly placed and impactful inversions in the layout) and the airtime is second-to-none.  Every element serves a purpose, and the ride is taken so comfortably yet isn’t afraid to throw you around.  The decoration is excellent, and the soundtrack is pure bliss; easily some of the best audio I have ever heard at a theme park, The Notable Stranger has done an excellent job.

My concerns going forward are the maintenance of audio systems, and effects; the train lighting and mist has already proved unreliable, and the ride has only just been open a week.  Pleasure Beach are historically not the best with keeping audio systems in check, but I hope Icon changes this trend.

Thanks for reading, a few more photos below 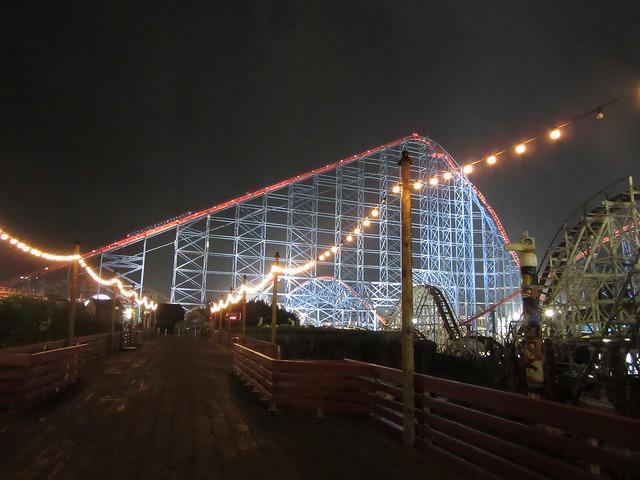 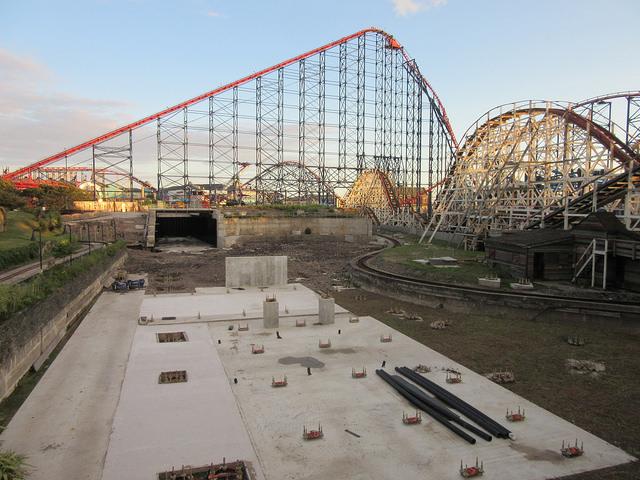 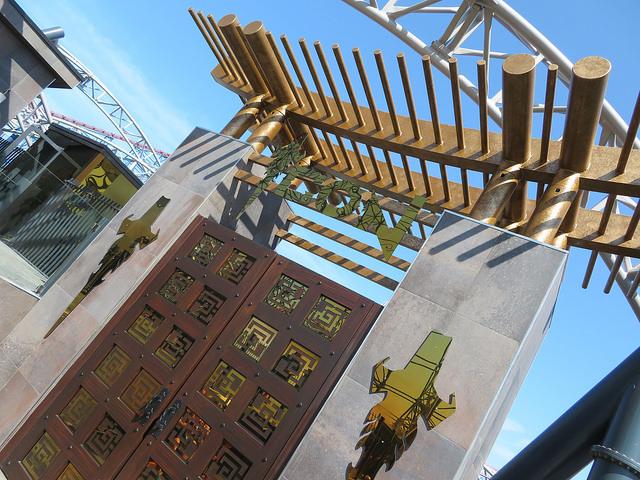 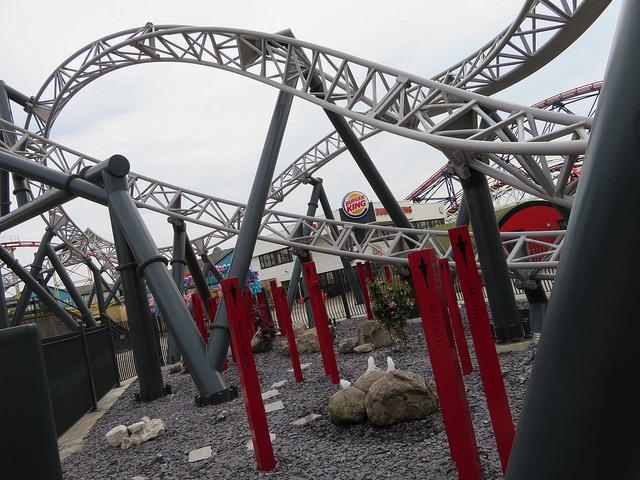 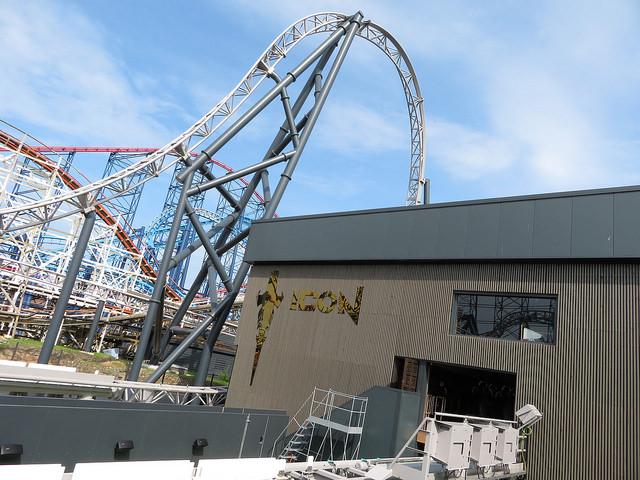 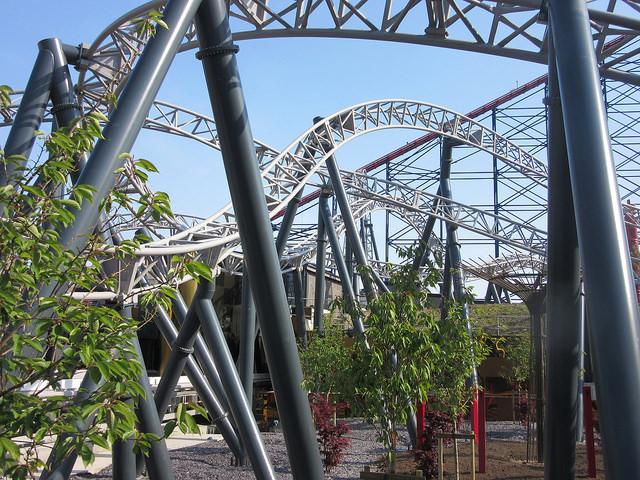 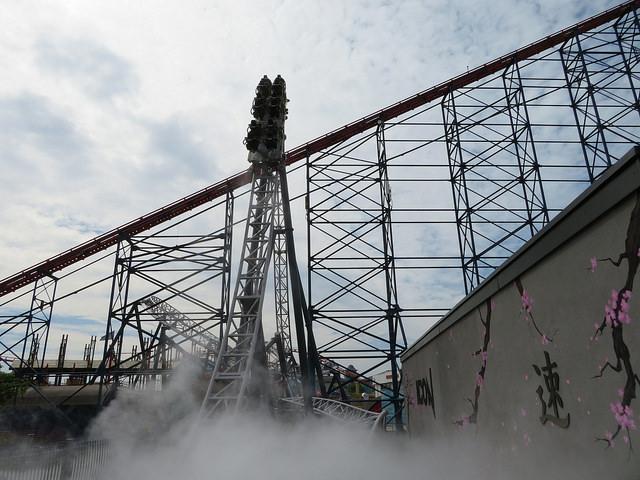 Icon is incredible, and offers something that the UK has been missing for some time.  Pure quality.