Opening autumn last year, The Bear Grylls Adventure already feels like a forgotten Merlin attraction in some sense. No real fanfare when the attraction opened, and still no advertising, it's a weird scenario. Apparently a big advertising push is coming this spring though, so maybe that will help get the word out there a bit more.

This is one of the hardest questions to answer, but I'll try. BGA is split into several different activities, and you can pay to do basically any combination of these:

-Diving. Dive in a cage surrounding by animals, including sharks

Basecamp is very much the standard go to option, with maybe one or two extra activities added on. To do all activities is an 8-9 hour day.

I ended up doing this today, opting for Basecamp, the High Ropes Course and Climbing. You choose timeslots for the activities, and we went for Basecamp - 11am, High Ropes - 1pm, Climbing - 3pm.

Bear Tags are the big piece of tech for BGA. It tells you where you need to be at what time, vibrates when it's nearly time, acts as a check in for each activity, your key to a locker (lockers are free, as you're not allowed anything with you on any activity), etc. It also acts as a ticket for scanning photos to you too. You can put your card details on there and use it to pay for stuff too.

Ours proved to be temperamental during the day, with one dying half way through, sometimes not vibrating at the right time, not scanning, etc. The idea behind them is nice, so hopefully the technology can work out too.

Basecamp is the hardest thing to describe, as it's a very mish-mashed experience. You share this experience in groups of 16-20, and is advertised to take 90 minutes, as well as a Bear 'ranger' who guides you round the activities.

You start off with a Survival Maze:

Our Survival Maze is set to test your courage and encourage you to face your fears. Featuring a number of common fears, Survival Maze is designed to prepare you for anything, and show yourself just how brave you can be.

This is basically like what I'm a Celebrity should have been. It's hard to describe it without giving spoilers, but in short it's a 20 minute guided tour through various challenges and activities, based on certain fears and survival elements. As I say, imagine Thorpe's IAC maze, but amped up a level to actually try and test people.

I'm not quite sure how I felt about it in the end. It's hard to tell whether it's "so bad it's good" or "bad". Our guide was very over-the-top cheesey at times, and again, hard to tell if it made it worse or better. So I finished the first element unconvinced.

After leaving the maze and having a photo opportunity (not forced, and you get digital copies included with the Basecamp ticket!), we were then guided around the building towards the escape room.

The escape room is a 7 minute timed challenge, up to 10 people per team (there's two rooms so no waiting around), which simply requires finding one 4 digit code. The ranger guide gives you a clue at the start, and you have to decode messages, radio clues and writing on the wall to crack the code. Neither team in our group managed it, and it's one of the weirdest escape rooms I've done. I don't like the way it presents clues.

Rather awkwardly, the escape room leads you to an unthemed, essentially staff area, to get back out.

Archery is archery - it's what you'd expect! You're given a very thorough briefing and demonstration, and then get to shoot 10 arrows. It's good fun, well presented and though it's always nice to have more arrows, this felt like a good fair number. 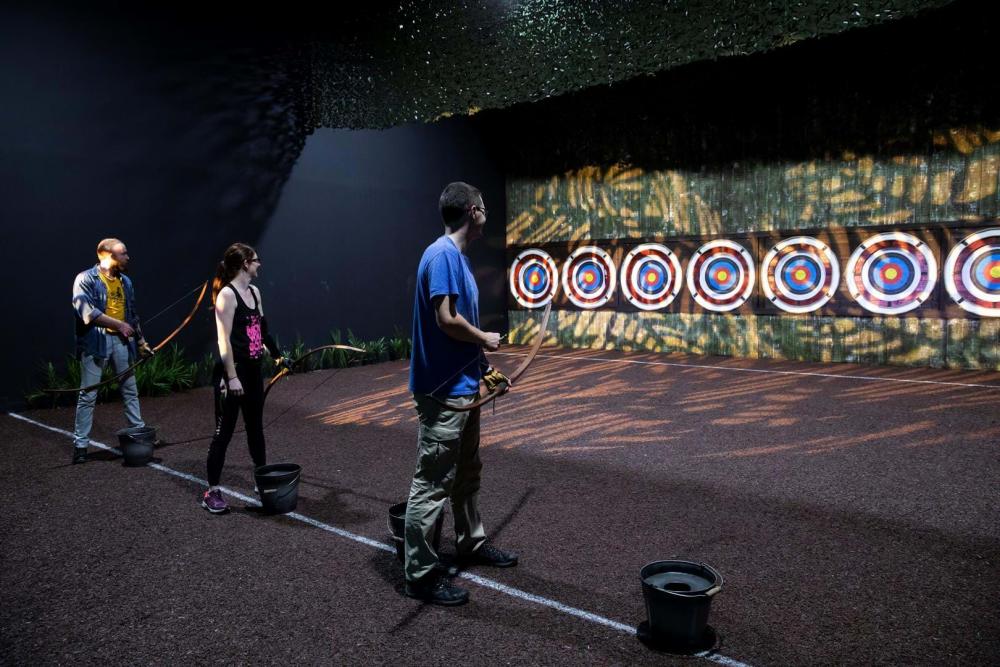 We did it at about half 2, and honestly, this is full on! Said to be based off a Royal Marine's assault course, you spend a lot of time before stretching, running on the spot, etc (which in itself was pretty tiring). You're part of a large group, but sent round in groups of 2-4. The assault course is fairly standard fodder - balancing, high/low beams, crawling under nets, climbing up nets, and included a jump over a 6ft wall and ascending/descending monkey bars. You can skip any element you can't do (I tried the monkey bars and failed miserably).

Rather nicely, you're given an anklet which acts as a timer, so you can see your time. I managed it in about 2m40s, which was in the top third of everyone in the group. Fairly happy with that, but it left me proper exhausted!

The High Ropes Course takes place outside, in a stand alone structure which - at its highest - is about 60ft tall. To leave the building, you zipline from above the entrance (themed to a helicopter) towards the course - normally the finale of a high ropes course, but still fun nonetheless!

The course has over 30 different features, spread over 4 levels (and the higher you go, the more challenging the features supposedly get). Despite the odd look, the course was very good fun, and extra challenges were had due to the rain and sometimes quite fast wind! Out of curiosity, I asked if they shut it down in windy conditions, and they said they have a limit, but haven't reached it yet. I managed all but one feature, a particularly tricky spinning log which I didn't fancy due to the weather conditions (and my shaky legs at 60ft!).

You can either get down by walking back down, or doing a death drop - essentially just being harnessed up and jumping from the third level in a very mini bungee jump like situation. Again, that proved very fun.

A nice feature of the high ropes course is you can effectively take as long as you want. 90 minutes is the recommended time (including zipline and safety briefings), but there's no one checking the clock on you. I imagine within reason, you can stay up there as long as you like. 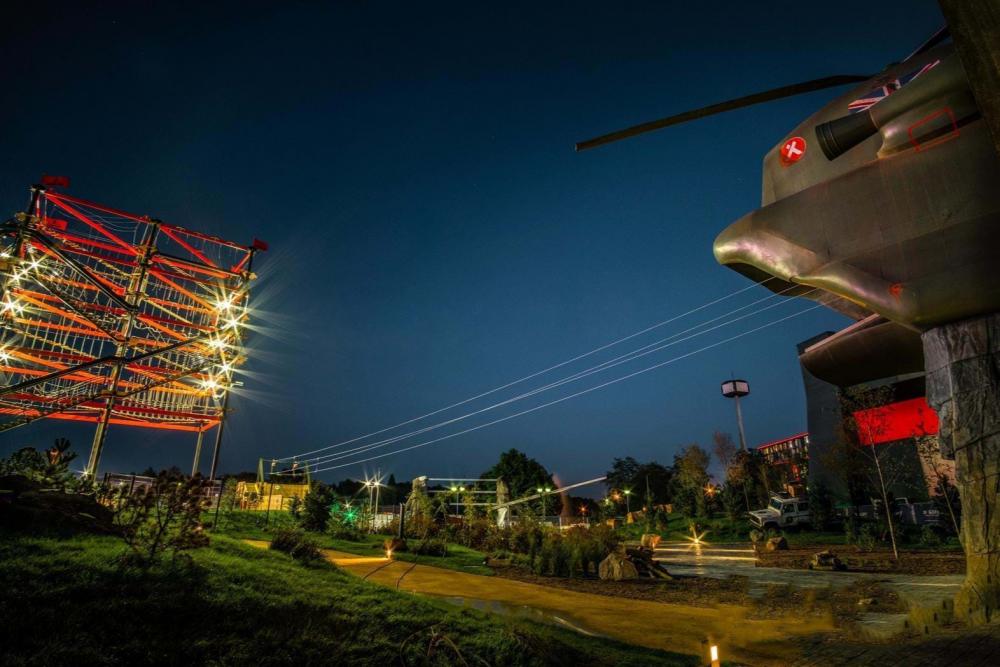 Climbing came directly after our go in the assault course. Already with achey arms, and me not having good upper body strength, I knew this wouldn't be great for me.

The session starts off with 20 minutes of bouldering (low level rock climbing), then 40 minutes of climbing up 8m high walls, of varying difficulties and surfaces. You can pick and choose what you attempt. Despite all my best efforts, and help from the instructors, I simply never got the hang of it. Wasn't totally unexpected, but a shame nonetheless. Maybe it's just me, but I feel like maybe there could have been a couple more very basic / entry level walls? Couple of others in our group struggled too, but ah well. 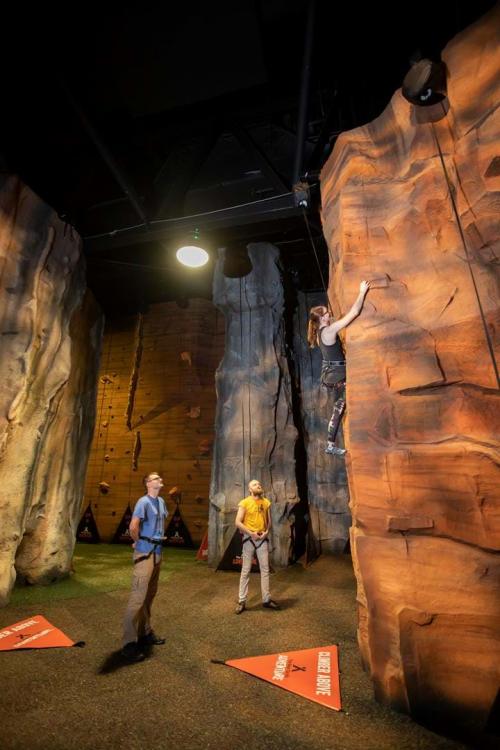 There's an onsite restaurant which serves hot and cold food, such as pizzas, nachos, sandwiches, etc. Standard Merlin fodder really, but at a reasonable price, with good value meal deals and AP discount still applicable to them! There's also a shop with BGA and standard Bear Grylls merch. Unlike other midway attractions, like Shrek, the prices are very much in line with theme park prices, and you can get AP discount on it all.

The theming is a weird one. All of the activities are well presented, and within the area there's some very nice themed features and elements. There's good ambient music (the iFly area actually plays the old Air theme!!), and thematic lighting, though perhaps a bit too dim. However, the ceiling is not themed at all, and makes it clear you're in a warehouse. Given you look up quite a bit, it is a bit of an illusion breaker, but something that could be easily - and cheaply - remedied by just some cheap cargo netting! Also, as mentioned, the walkway after the escape room is terrible.

The Basecamp idea is weird. It is advertised very linearly on the website, but the activities are spread out through the attraction, making it feel a bit clunky. Given the space has been built from the ground up, I'd have thought they could have designed it so one activity leads directly to one another.

It seemed fairly lively in there, and according to a member of staff we spoke to, about 200-300 people do the high ropes course over a weekend, and 150-200 do the climbing experience. Those numbers seem quite low, so it'll be interesting to see how it develops, especially once advertising kicks in.

Given all the different options available, the cost very much varies. The basecamp experience is £20, which isn't terrible, and add-ons vary and start from £15 (you have to Basecamp I believe). But there's bound to be offers floating around, and they're experimenting with different offers for Annual Passholders (at the moment, Basecamp by itself is £1 for example). So it can be quite an expensive day (all activities together cost £160), but it's not exactly bad for the variety you get. Even better if you get a special offer!

Overall, Bear Grylls Adventure is something complete different, and offers something for everyone. If you're a well-trodden high ropes goer / climber / whatever, those specific probably won't offer much for you, but if not, it's a really fun experience to be able to do a variety of different things. Definitely something worth trying out if it does sound up your street!

(NB: As phones aren't allowed in the activities and the lighting was low-level, I've just stolen photos off the official website)