Something Stupid: Thorpe Half Marathon 2018

How far would you go, as an enthusiast, to build your collection of Theme Park tat?

Take out a Wonga loan to cover the cost?

Break up with your long term partner so you can free up some space?

How about run a half marathon to earn it...?

Well, last Sunday saw me do Something Stupid as I found myself running the 21 kilometres of the 2018 Thorpe Half Marathon, all in an attempt to nab the jazzy coaster-themed medal bestowed upon those who manage to get over the finish line.

The Thorpe Half is now in its second year, having enjoyed a successful - if wet - debut in 2017. Unfortunately as it's held in February, the park is closed, so the only real connection to Thorpe Park is that it starts and ends in the car park; there's no sprinting past Stealth and dashing around Depth Charge. What it does have to offer however is a pleasant run through the Surrey countryside, along a relatively flat-profile road-closed course - perfect for those chasing a personal best.

I was, it must be said, not chasing a personal best. I was just in it for the medal. 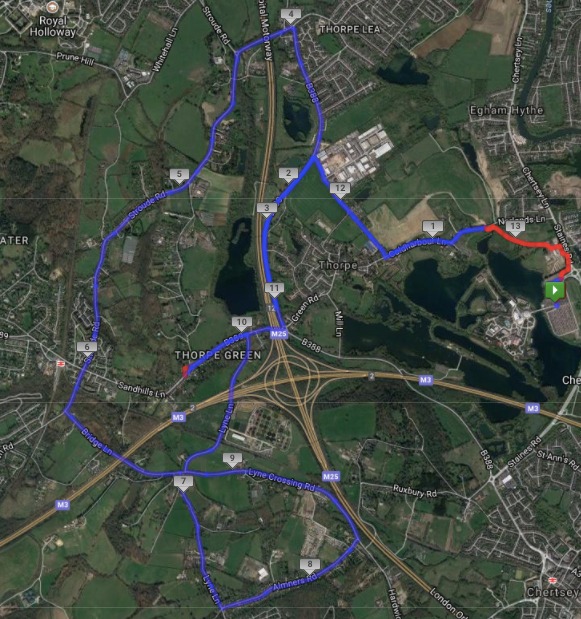 So, first things first. Sunday 25th February 2018 was cold. Bloody cold. The event organisers recommended that participants arrived at the car park by 07:45am, to allow good time before the race started at 09:00am. At 07:45am on Sunday 25th February in the Thorpe Park car park, the mercury was touching -1 degrees C.

But this hadn't deterred anyone! Indeed, the car park was busier than the average in-season Saturday when I arrived, and the place was buzzing with excited, committed runners. Many of whom seemed happy to be out in nothing more than vests, lycra, and shorts. In -1 degrees.

At this point I must admit that I took a large gulp and wondered what on earth I was doing here - and this wouldn't be the last time this particular thought crossed my mind. 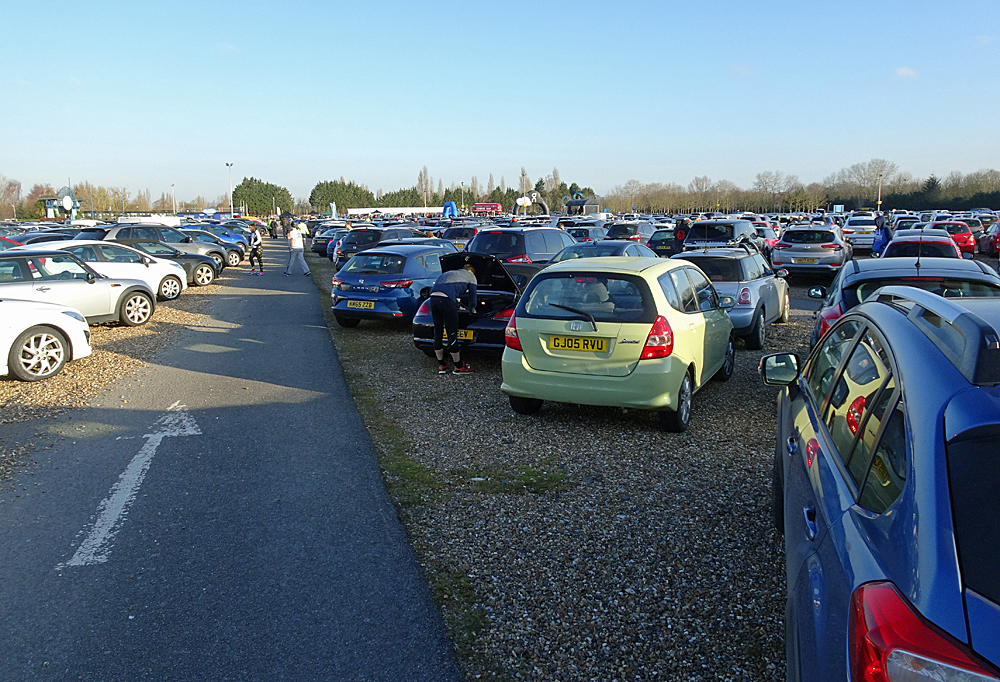 It's also worth saying that I wasn't prepared for doing this. At all.

The fault is squarely mine, but I had done such minimal training beforehand that it doesn't even really merit the name "training". Since I booked a place at the event back in November, I had managed a grand total of two 3 mile runs on the roads around my house. Two. And on one of those I very nearly threw up at the end of it.

I am not a runner. I don't especially enjoy it, so, at best this was going to be a struggle. But there was only one way to get that medal...!

At this point I decided I'd take my mind off the impending challenge by having a nose around the site.

First up was a mosey on over to the park entrance - which looked very bare without an actual sign there! Does this happen every season, or might we be about to get a new sign design? And whilst they're at it, the paintwork could do with a good looking over too... 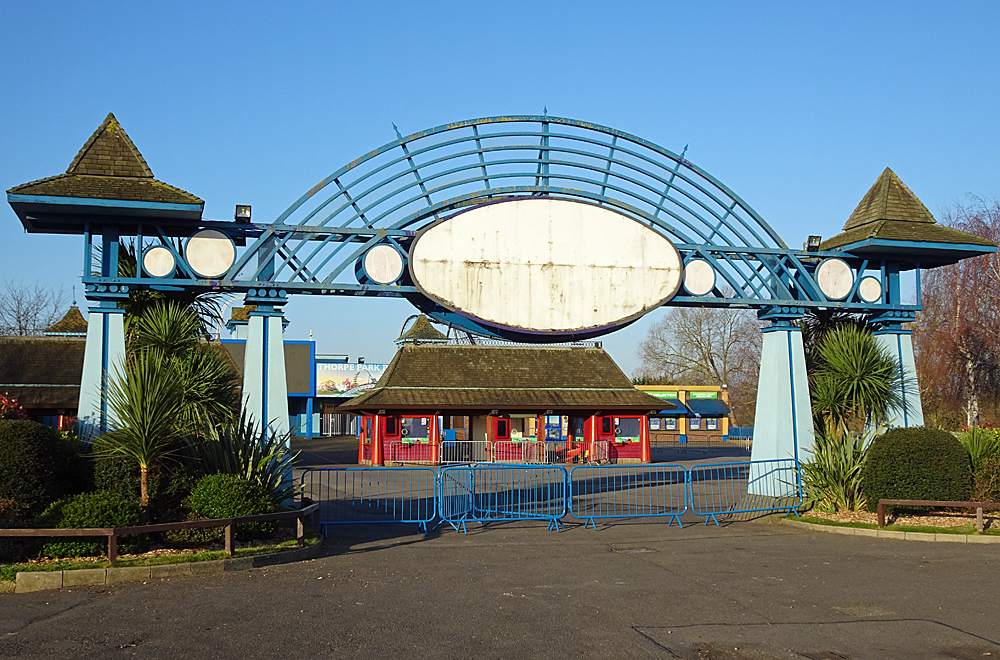 Alas I was allowed to go no further, because this sign had both red writing and underlining - doubly authoritative. 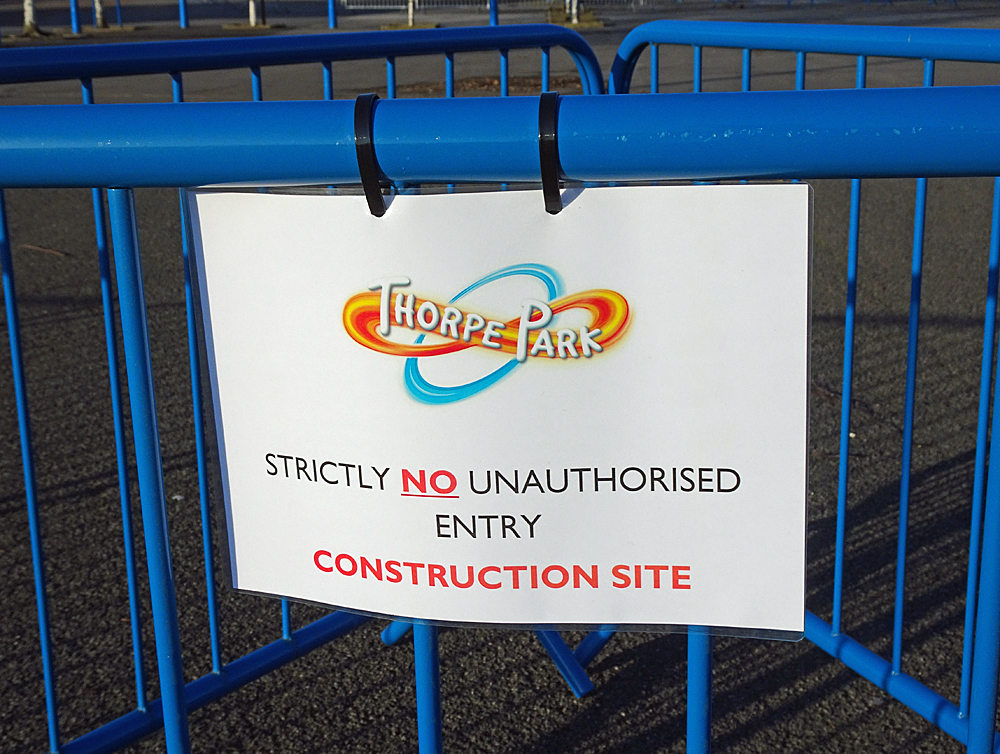 Thanks to my trusty zoom lens though, I could peek in a little closer...

...but there wasn't really much to see. 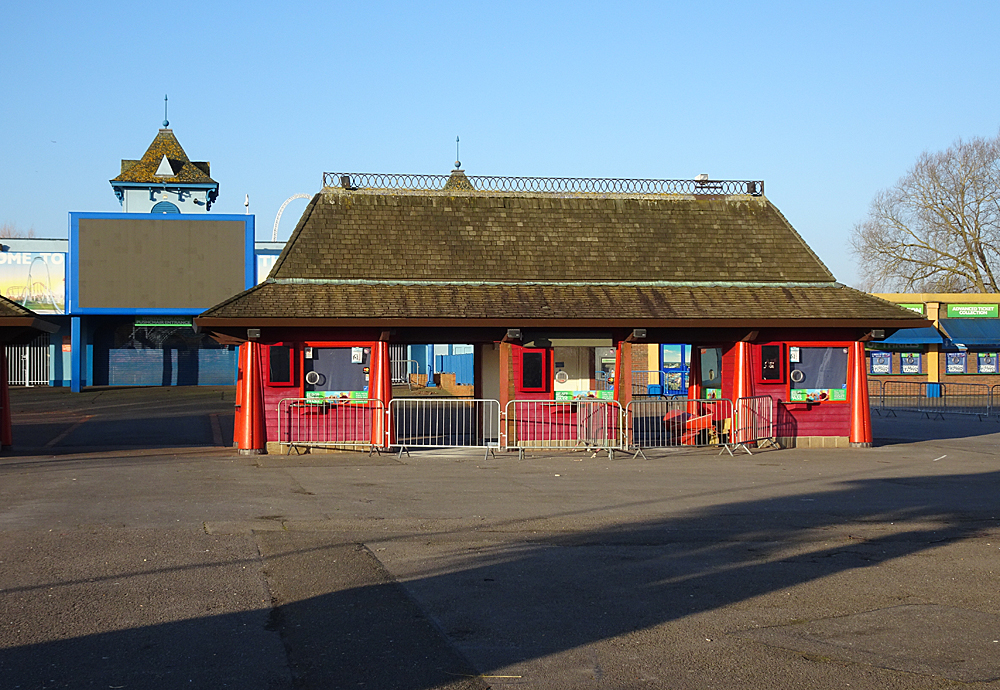 The Annual Pass building seemed to be getting a good dose of TLC though. Looked like it was having a new roof fitted, given the scaffolding. 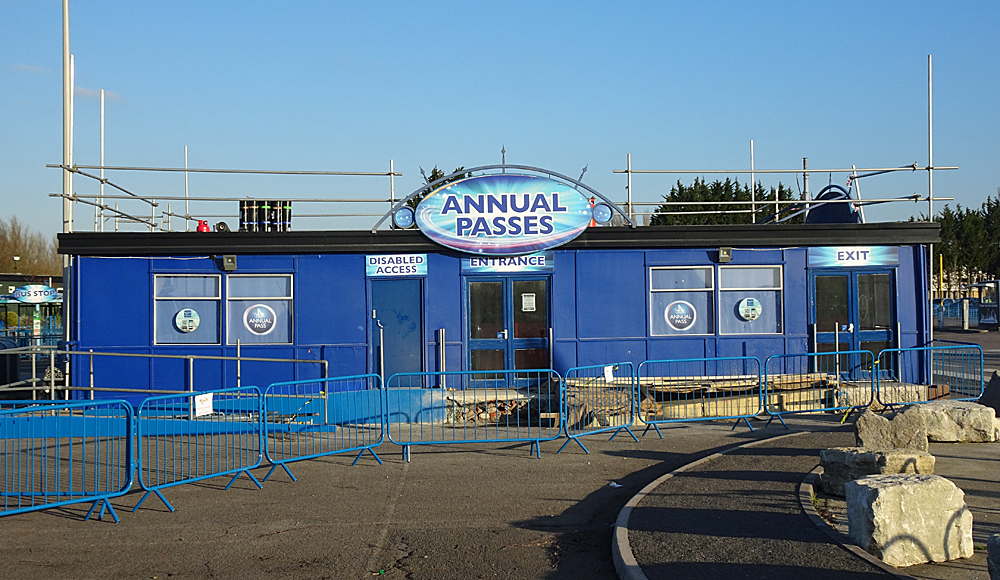 Given the red underlined signs everywhere, it was pretty clear that the toilets by the entrance were out of bounds and out of action.

So bring on the portaloos!

Unfortunately, you can never have enough portaloos, and in this case, there weren't enough portaloos. Queueing is par for the course at any Theme Park, but queueing in sub zero temperatures is even less fun. 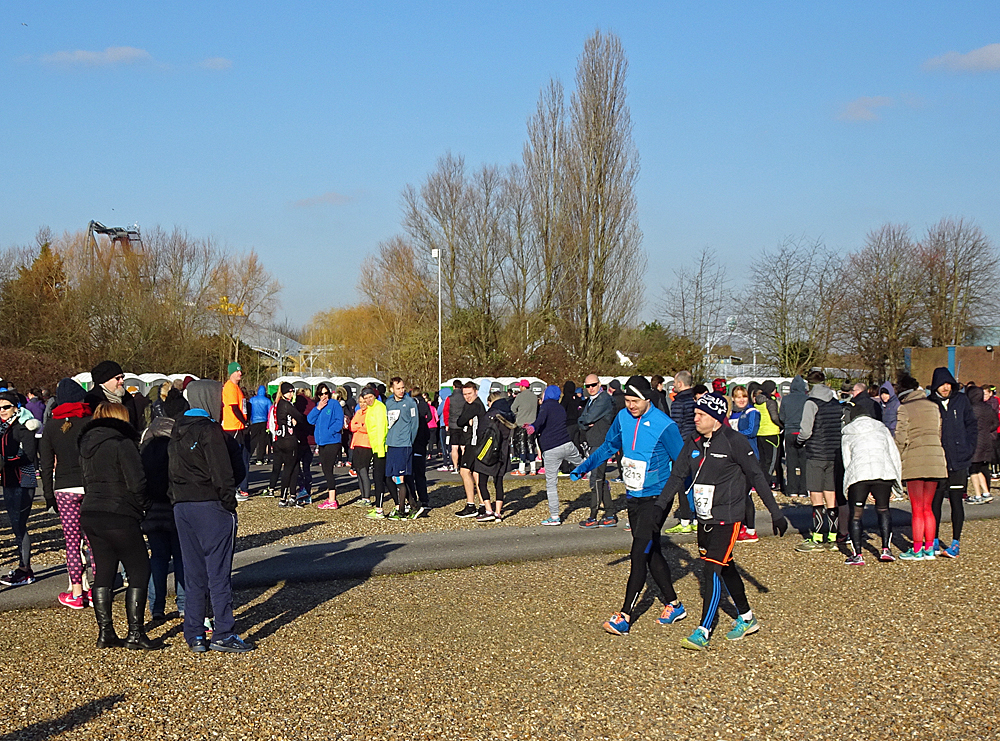 A quick look over the back of the bogs revealed very little of interest - although Zodiac standing stationary in a half-upright position looked quite strange! There was no visible work being done to X / WDTR.

However, it is photos such as this one that make me think how lucky we are to have a park as pretty as Thorpe in our country.

Thorpe Park is rarely praised for looking good. But with bright blue skies and deep blue lakes top-and-tailing it, it can't be denied that this is a sweet view. Reminded me strangely of a (very) mini Cedar Point... 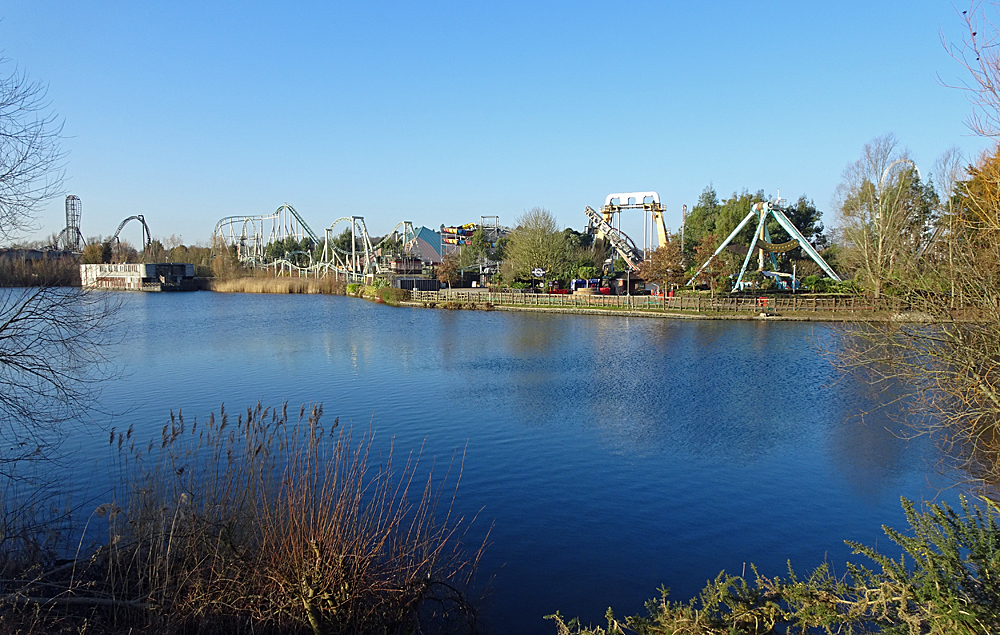 OK - back to the action. The event organisers had done a great job with the central runners' village area, which contained a Cookie Bar, Coffee Stall, Massage Beds, Medal Engraving, a bunch of running-related retailers... 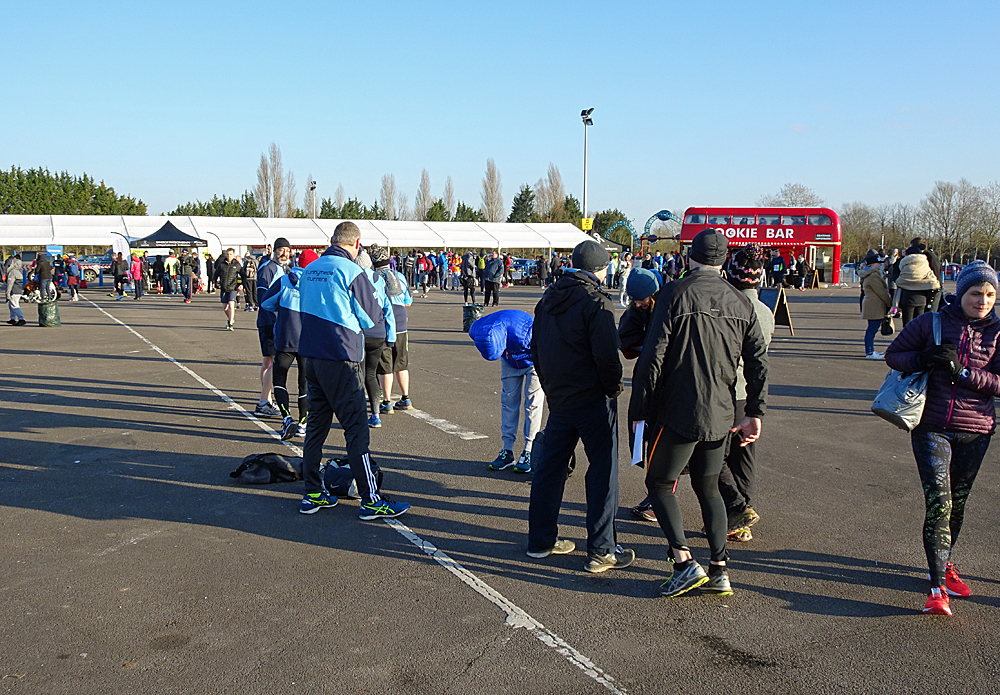 Pictured here are the Epsom Rock Choir, who were singing with gusto despite the bitter cold. Did I mention that it was cold? 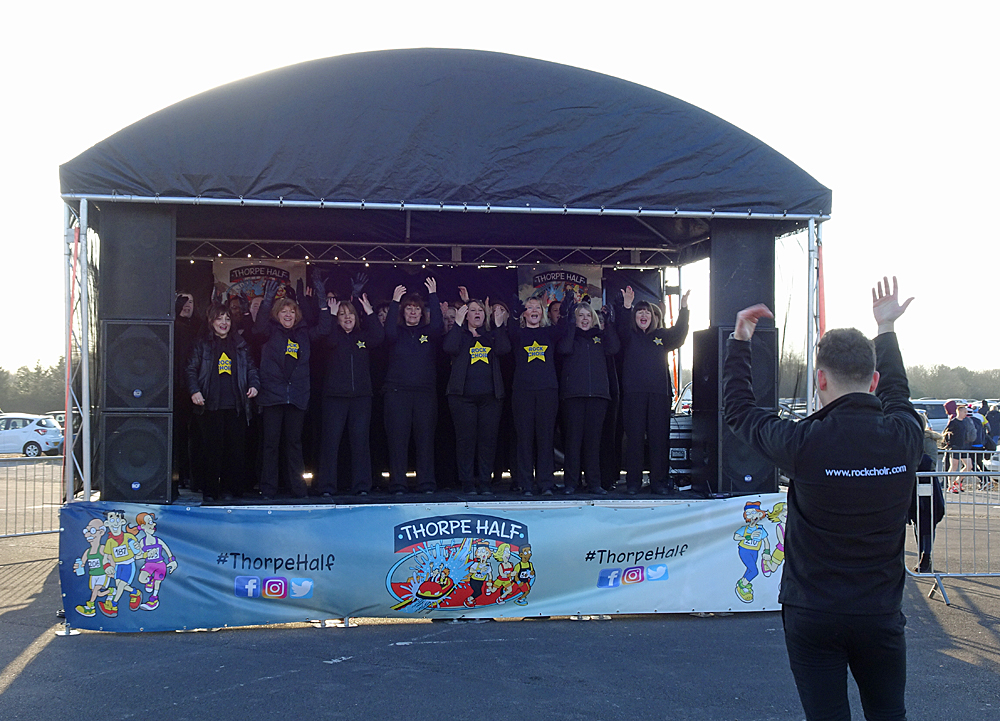 08:45am. Nearly game time. I got changed into my kit, which naturally featured a vintage Thorpe t shirt, and made my way over to the start area. 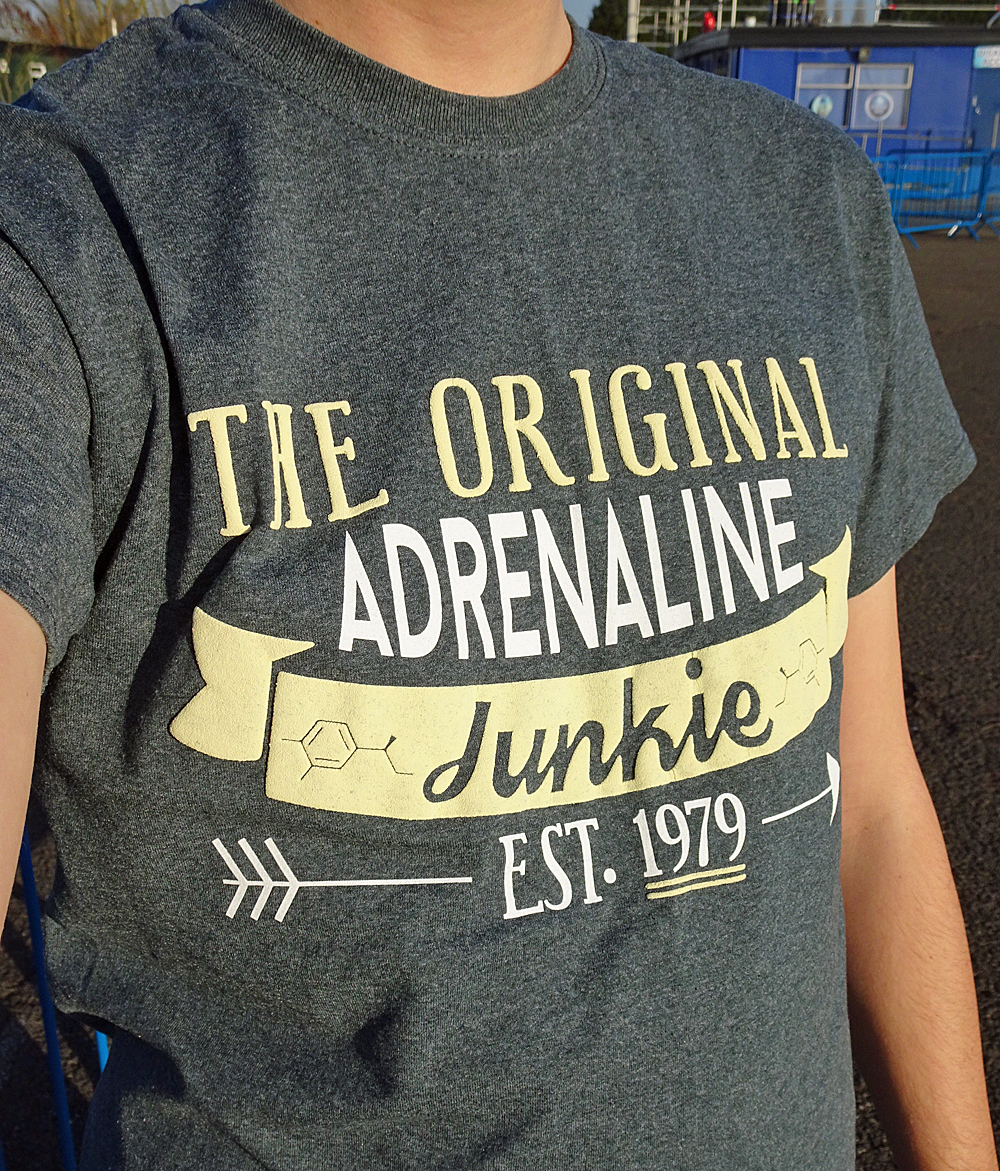 There were nearly 2,000 runners taking part in today's race, including many that had been bussed in by their local running group for the event.

The "why am I here?" thought flickered across my mind once more. 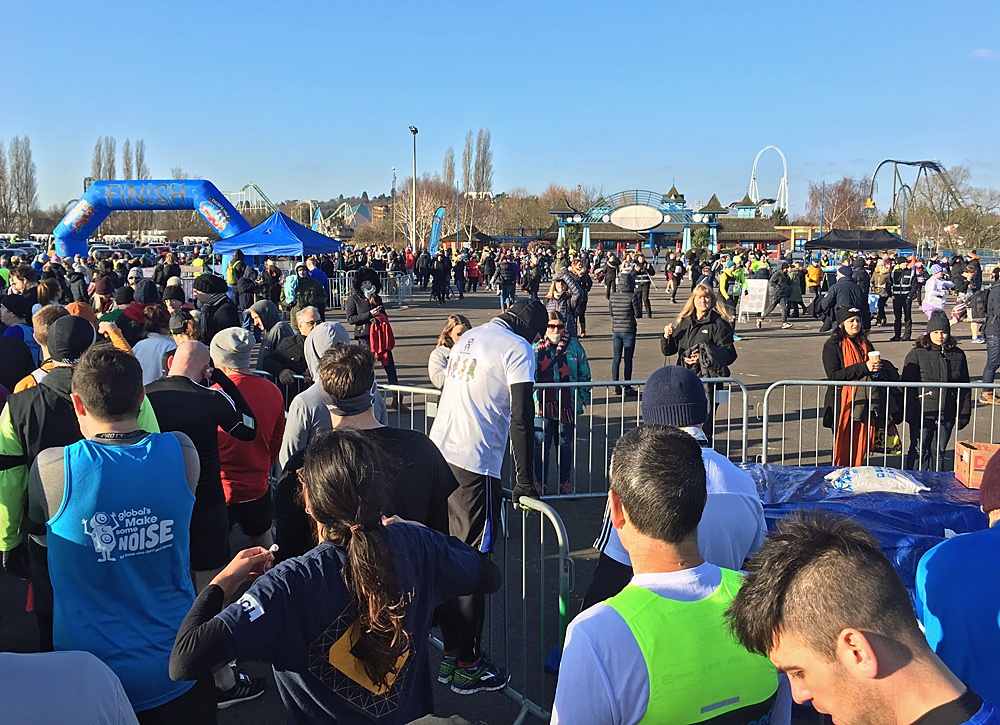 And we were off!

The route took us past the annual pass building, down towards the car park entrance, and off to the left. 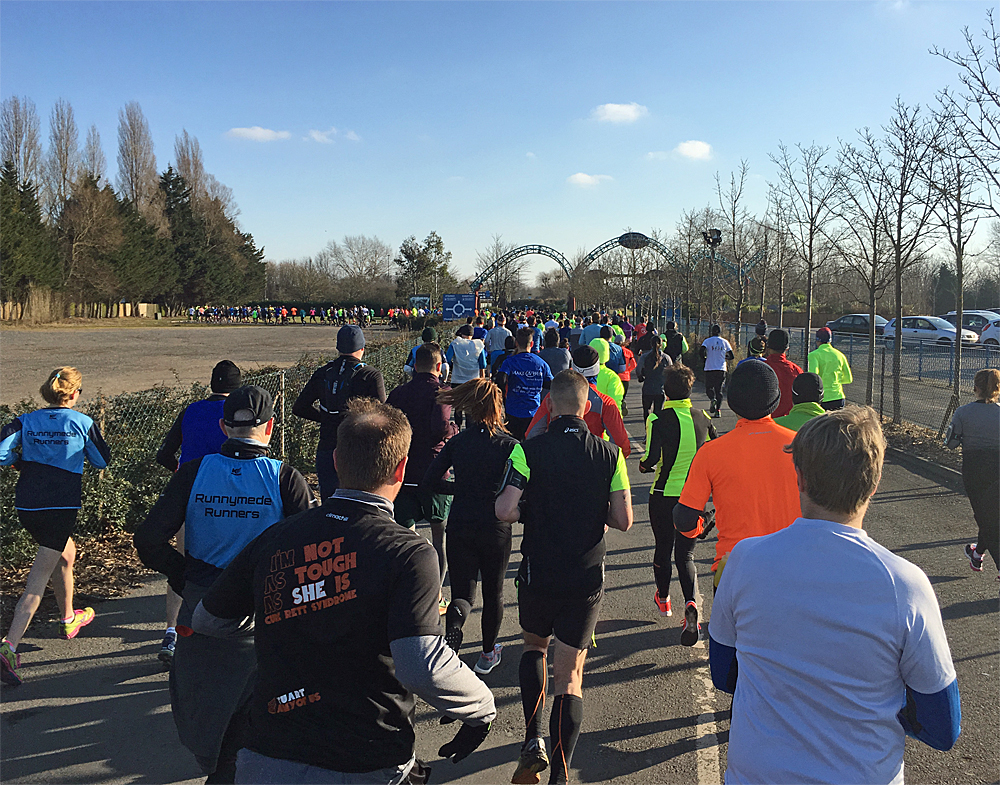 Do you know the Six Spells for Safety? 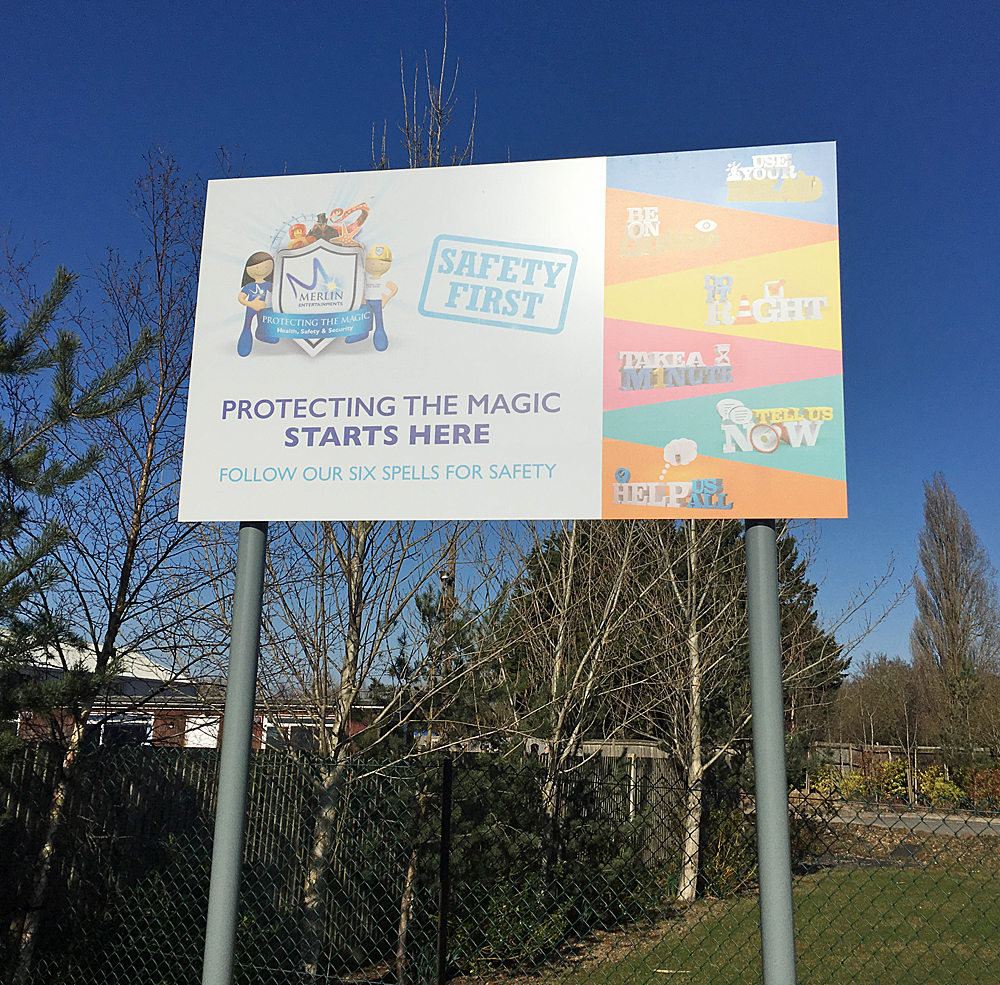 The route continued to track along the Staines Road, through the backstage areas of the park. Lots of industrial-looking buildings and infrastructure. And then, behold! Geek Photo #2 - I spy nostalgia!

These look to me as if they've been saved from Chief Ranger's Carousel (RIP), which is great. But what will the park do with them?! Hopefully not leave them to rot... 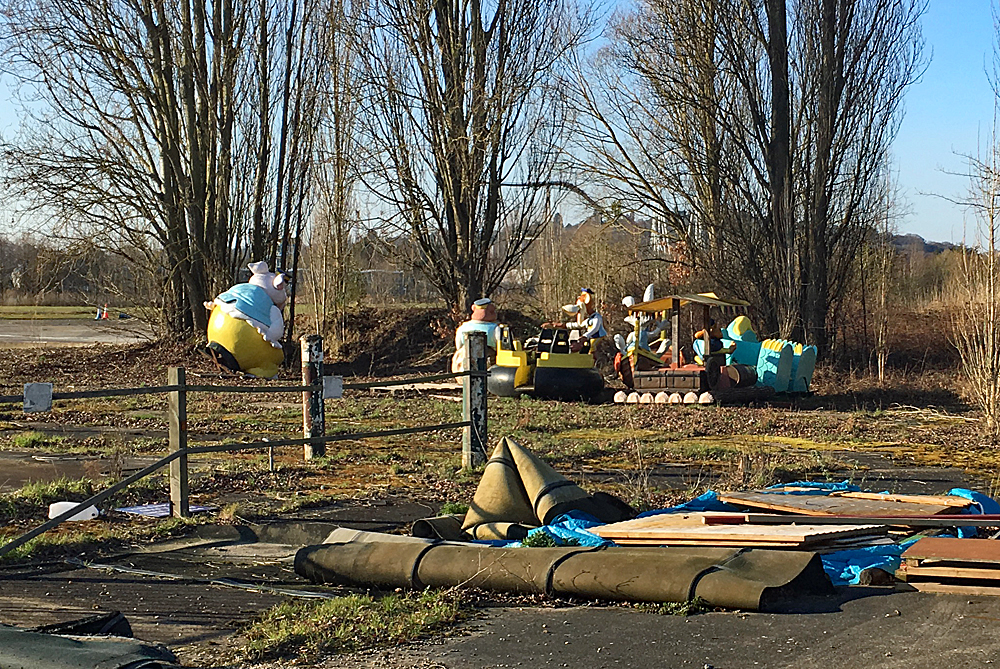 OK, back to the race. The course had kicked us out of the Thorpe Park grounds at around 1 mile, on to Norlands Lane, then Coldharbour Lane, past Thorpe Farm (RIP), and up to the Thorpe Bypass.

At this point, my lack of fitness was really kicking in. The Sunday morning jolly at the Theme Park had suddenly turned very real, and I was wheezing after just 2 miles.

What didn't help was this section of the course, which involved running half a mile up one half of the road, only to turn around and run straight back down the other half. Sigh. 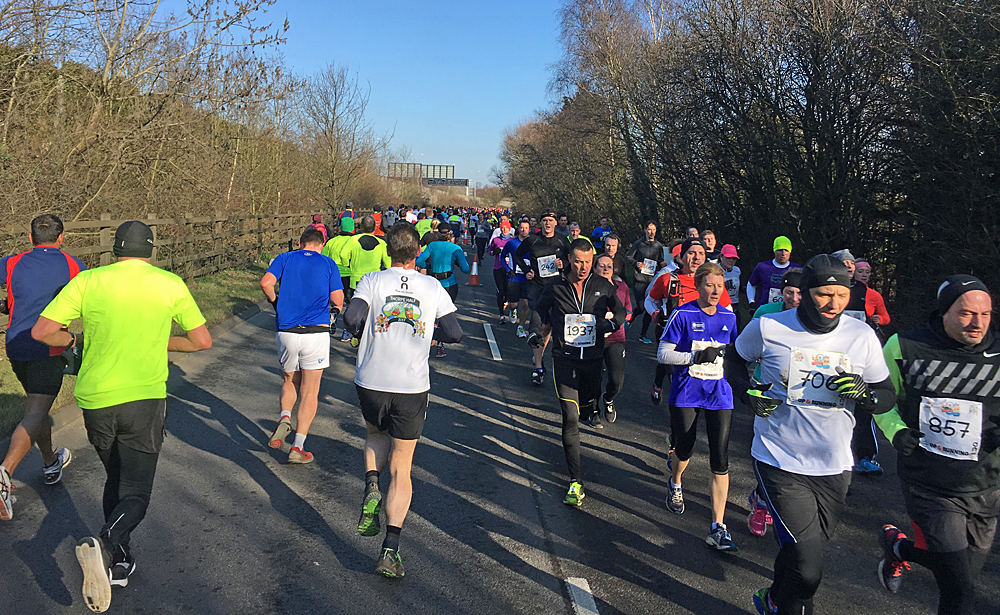 On the plus side, some great views of the M25. Oof. But to be fair, much of the route was through very pleasant countryside, and if I'd been more fit it might have even been enjoyable.

As it was, it was a real mental effort to keep my head down, and keep moving. Just keep going. One step in front of the other. The coldness issue dropped away after 4 miles, because my body was generating so much heat.

I was overtaken plenty of times, and I had to just walk up anything resembling an incline. Spotify was a massive help.

The breakthrough for me came at about mile 10, where I realised that I'd made it around 75% of the course and that finishing was achievable! At mile 12, I could start to see the tops of some of the rides peek over the skyline - wow. Never have I been more motivated by seeing the crest of Tidal Wave's lift hill!

My legs were properly turning to jelly, and the last pushes were really stop / start. But with a view like this, and the end in sight, I forced myself to go for a sprint finish for the last few hundred yards. I threw myself over the finish line and doubled over, my chest burning and my legs on fire.

2 hours, 1 minute, and 17 seconds of running later, and I'd completed the Thorpe Half. And what was all this endeavour for?

Another addition to my collection of Theme Park tat! But what an addition it is.

Genuine blood, sweat and tears went into getting it, so I suspect it will remain amongst the more treasured of all the tat in my possession. It's a good looking, weighty medal and I'm proud to have earned it! So, will I be running the Thorpe Half again next year to add another medal to my collection?

Immediately after the race my legs seized up to such an extent that I almost couldn't drive home. In the days following the event, my muscles were so sore that walking - anywhere - was a very real problem. And I later found I'd sprained my left foot along the course, and one of the toenails on my right foot had filled with blood and fallen off. Yuck. And did I mention the nipple chafing?

These injuries are, of course, preventable. As I said at the top of the piece, my running the Thorpe Half was Stupid. I certainly don't recommend following my lead and just running a Half Marathon in freezing temperatures with no prior training whatsoever in order to obtain a coaster-themed medal.

However, for those in better shape (or with a greater commitment to training) than I... it was a very well organised event. Why not give next year's a go?

Thanks for reading! Comments very welcome below.