My first experience of Blackpool started off before I had even arrived. Driving into the seaside town, the first thing you're greeted by are miles of banners for Icon. Blackpool is first and foremost a tourism hotspot and the Pleasure Beach is very much at the centre of this town. My first impressions of the promenade are not entirely positive. The street is quite tacky; donut stalls, arcades, casinos and pink horse rides are found along length of the street. The amazing views out to sea and sandy beaches redeem it somewhat.


On my first day at the Pleasure Beach, I was pleasently surprised. There was no lengthy wait to get in yet the park was thriving with guests on Saturday. This continued with relatively short queues compared to rival UK parks. What I love most about BPB and what has driven me to visit are the unique rides and layout the park has. All of the coasters are intertwined within one another in a way like no other park I've visited before.

The park maintains a diverse range of attractions with something for everyone to enjoy. Paired with very strong transport links, this makes BPB a great place to visit for anyone.


Presentation & Service
The park has a uniquely historical charm. I will say the main ticket office is quite grand inside, the staff here are well presented in classic suits. The office and the entrance were well staffed with more than enough people to handle larger crowds. Most of the staff in the park were cheerful apart from a few which can really make or break good a day out for guests. Fountains, fountains and more fountains were everywhere in this park. in the floor, on the coasters, ride areas, paths and are an attraction within their own right with a nice little show every 30 mins.


Food & Drink
Many of the Bars and the new Coasters restaurant have a modern, tasteful and clean look to them which I really liked. Most of them even served champagne. There were of course the standard fast food outlets too found at any park. We ate at the Coasters restaurant on the first day and I was very pleased with the quality and the price of the menu. I thought it was excellent value and I really hope to see more of this standard of food with similar affordable pricing at the park in the future.


The Rides
The Pleasure Beach has a number of historical rides with by far the best one for me being River Caves. This indoor boat ride feels untouched, all the effects and scenery still look to be in working order. There are no gimmicks, just gentle background music, some narration and great atmospheric sets that the boats sail through. It's just a really nice boat ride.


Grand National is by far the worst historical ride at the park. This is a duelling wooden coaster that bounces and partially derails around the corners. It's set through a beautiful workshop behind Valhalla with tufts of grass growing through the tracks. The Big Dipper and the Velvet Streak are much better wooden coasters for their age.


Steeplechase is the most unique and rare coaster at BPB being the only ride of it's kind still operating in the world. It consists of three horse shaped vehicles running on vertical track rails. The track moves freely over the terrain with minimal support structures and has the ability to tilt the horse vehicles around the bends by offsetting the lower rail.

Forming part of the Blackpool skyline, The Big One is the second Hypercoaster I've ever been on and the tallest in the UK at just over 200ft high. The Hill and first half of the ride are the real highlights, you can see all of Blackpool at the top! The first airtime hills as of any hypercoaster are breathtaking and unlike any other coaster experience. The lower half of the ride feels more like a shopping trolley in a carpark however with a very jerky ride. A real shame that the station is literally a warehouse. No attempt at theming was made at all and frankly I've seen better industrial units. It's still worth riding for the experience. 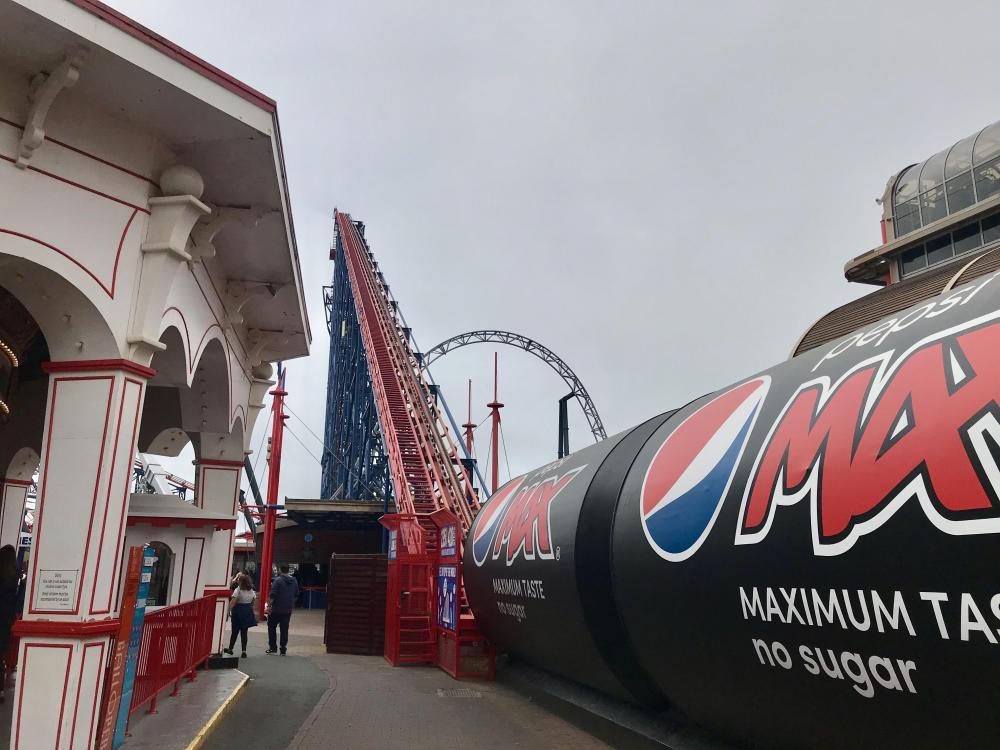 Infusion is highly regarded amongst many as a terrible ride. The theme of the ride is simple yet so dynamic with water jets crossing streams between the twisted steel, it almost looks like an engineering water sculpture. I want to end the negative hype and say that the ride is not as rough as people say it is. It's not smooth either but I've been on worse. I would ride it again if I returned.

Revolution was a strange coaster for me. The station is at the top of the ride. As there are no airgates, there's a constant safety announcement on loop along with the original yet dated claim that it will be "the most thrilling ride of your life". It's a shuttle that sends you round a loop forwards and backwards, the backwards part being more nauseous than thrilling. The best thing about Revolution is the classic Arrow loop support structure.

Notably the best dark ride at BPB is Wallace & Gromit's Thrill-o-matic. Each scene is beautifully crafted to look just like the films. The voice overs, audio, lighting, everything is spot on and the ride has a decent length. It's charming, funny, northern and colourful. "I've got patent pending on that", "You'll be hearing from my solicitor about this!", "Cheeese" ?The ride cars are like giant slippers which is just fantastic. It brings back childhood memories for me too, For me it's easily the best dark ride in the UK. 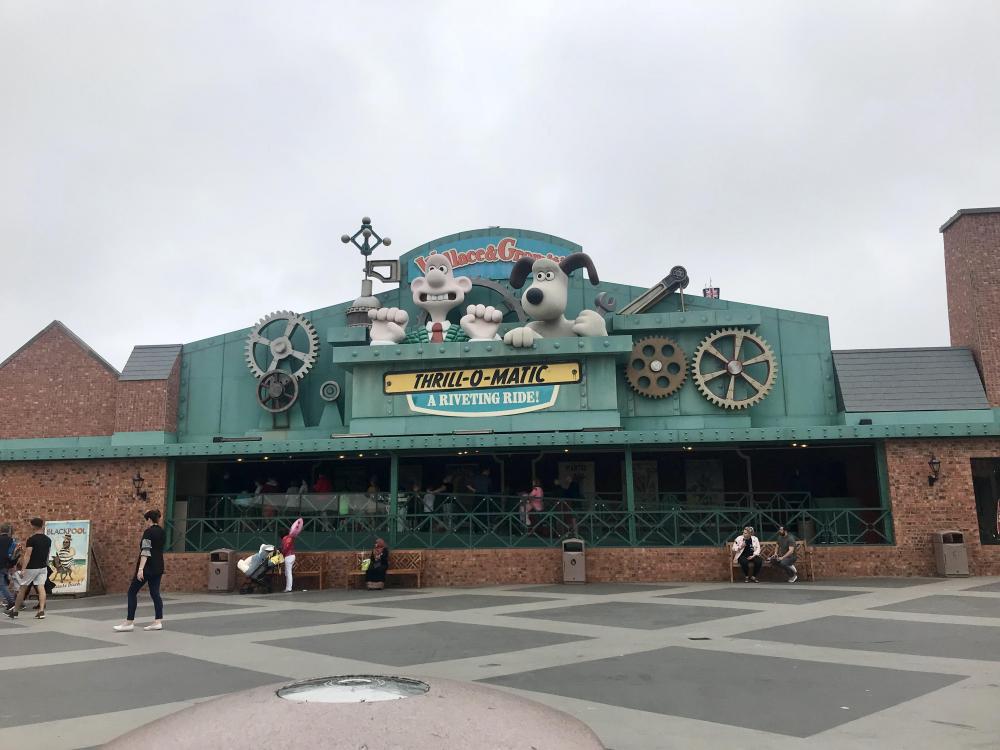 My gosh where do I start with Valhalla? It is an epic boat ride experience. The sets are impressive and the drops are brutally soaking wet. I started by submerging my shoes in a half filled boat. The flames were impressive, the steam was intense, the ice scene was frosty. It's really a one of a kind boat ride. A must do at BPB.

The first Mack coaster at BPB; a bobsled called Avalanche twists and turns between Revolution and Icon. The station and surrounding area feel as close to Euopa Park at Blackpool as you can get.  The Swiss music and chalet really have a similar atmosphere. Avalanche itself however is much better than it's Europa Park cousin. It has fast, snaking turns that pick up speed ending in two intense helix turns towards the bottom.

Finally the newest Mack coaster, Icon is by far the best ride at the park. I'm still in a dilemma about where it ranks in my all time favourites as it is that good. Frankly I was overjoyed when I found out Pleasure Beach were building a Mack megacoaster in the UK. I loved Blue Fire at Europa Park and this is no exception. 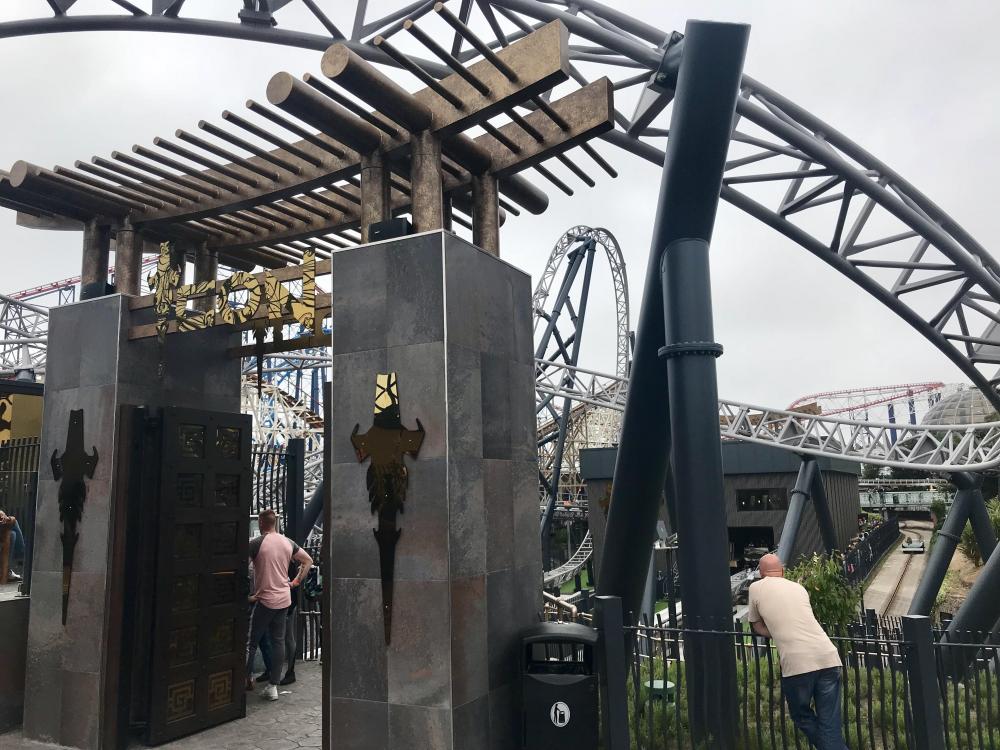 Mack launches are not entirely linear. The best way to describe it is like being pushed on a swing, it starts rolling and then builds up the momentum. If you expect an Intamin style launch, you will be disappointed. The airtime hills, swaying turns and punchy acceleration made it such a smooth and enjoyable ride. Riding on the front row, you get a very floaty and fun ride. On the back row, the ride is the most intense with forceful positive G's and sharp, quick pops of airtime. The momentum of the ride doesn't end until the last turn as the second launch takes you up and over probably the best designed immelman I've ever seen. 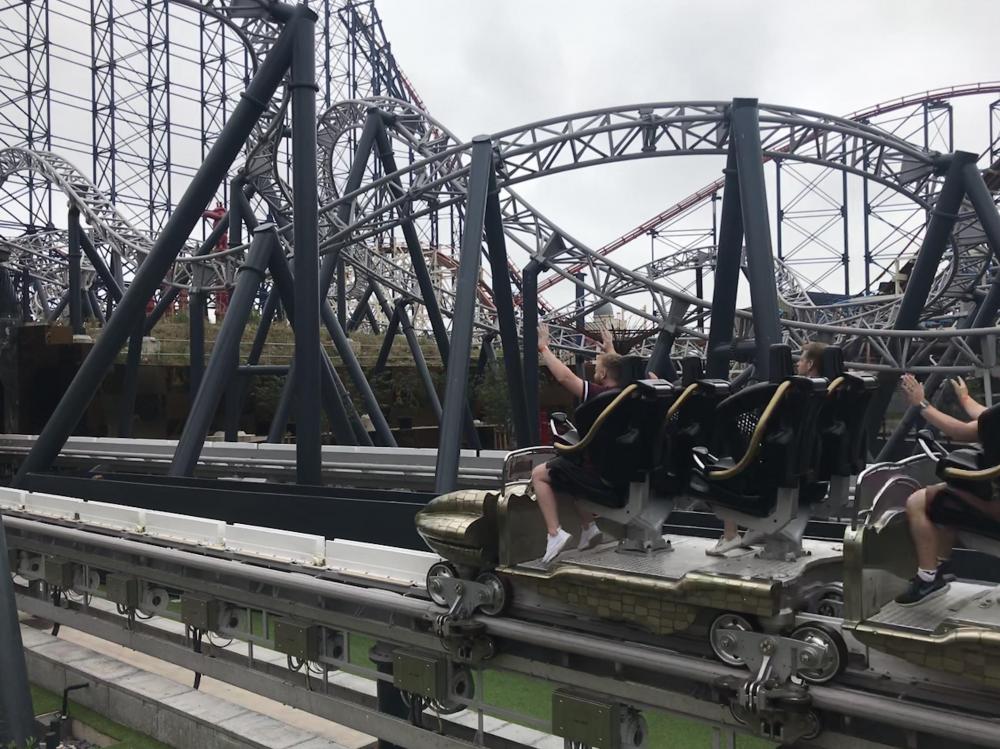 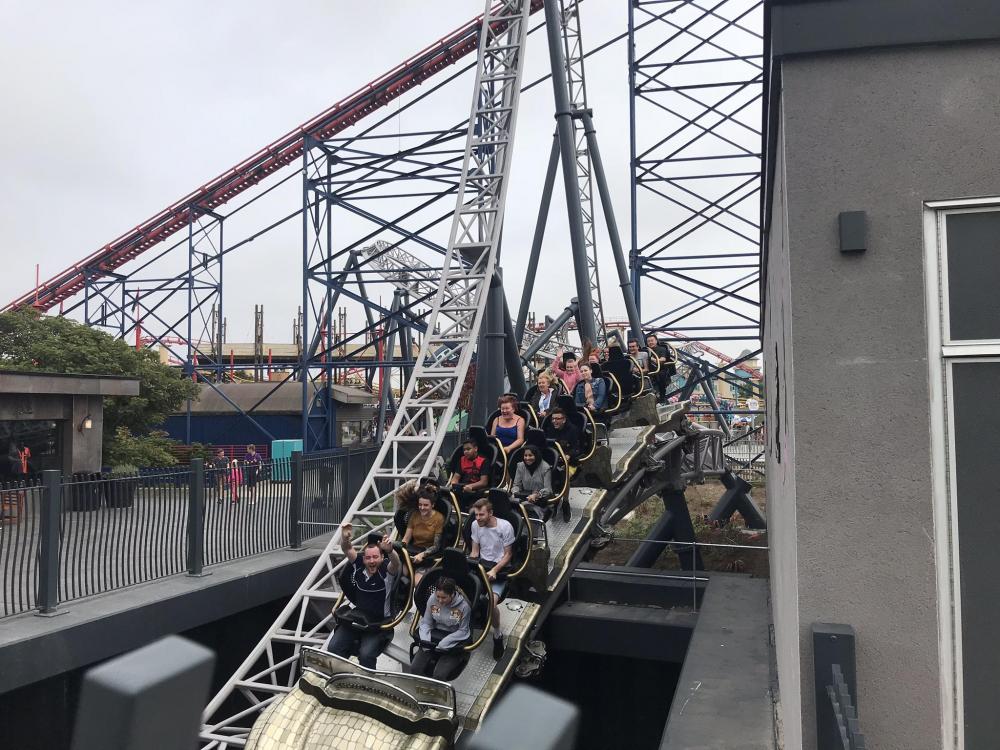 The theme is minimal yet exremely well presented. The music is dramatic and catchy. The seats are open yet comfy, the OH restraints feel like lap bars and they swing down and spring up making dispatch lightning fast. The Mack bag flaps are convenient yet secure. It eats through the queue line so even waiting for the brand new ride is quick. All I can say is BPB have got something really special here. Overall, Icon is just a fantastic attraction. I think it's the best new coaster we have had in the UK this year and the one I've most been looking forward to. 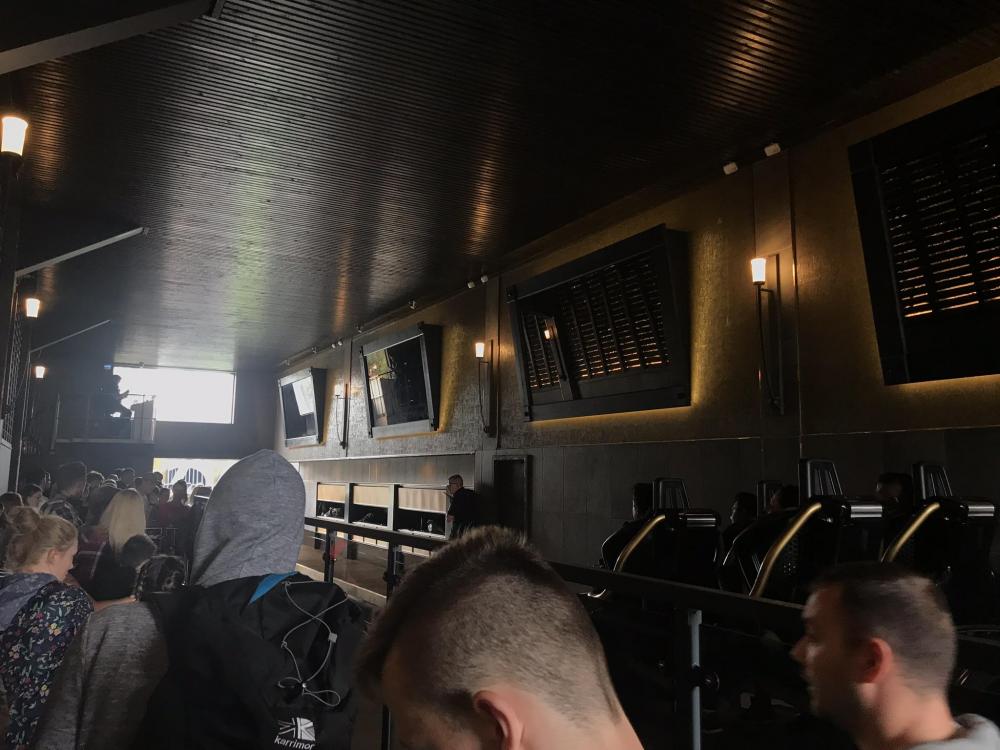 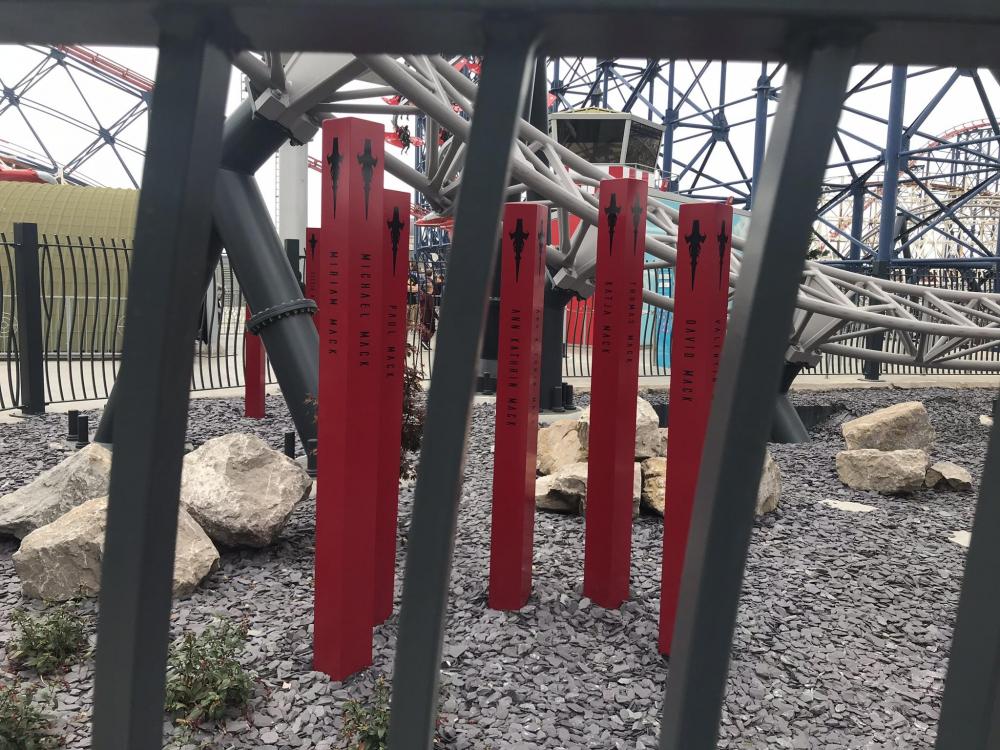 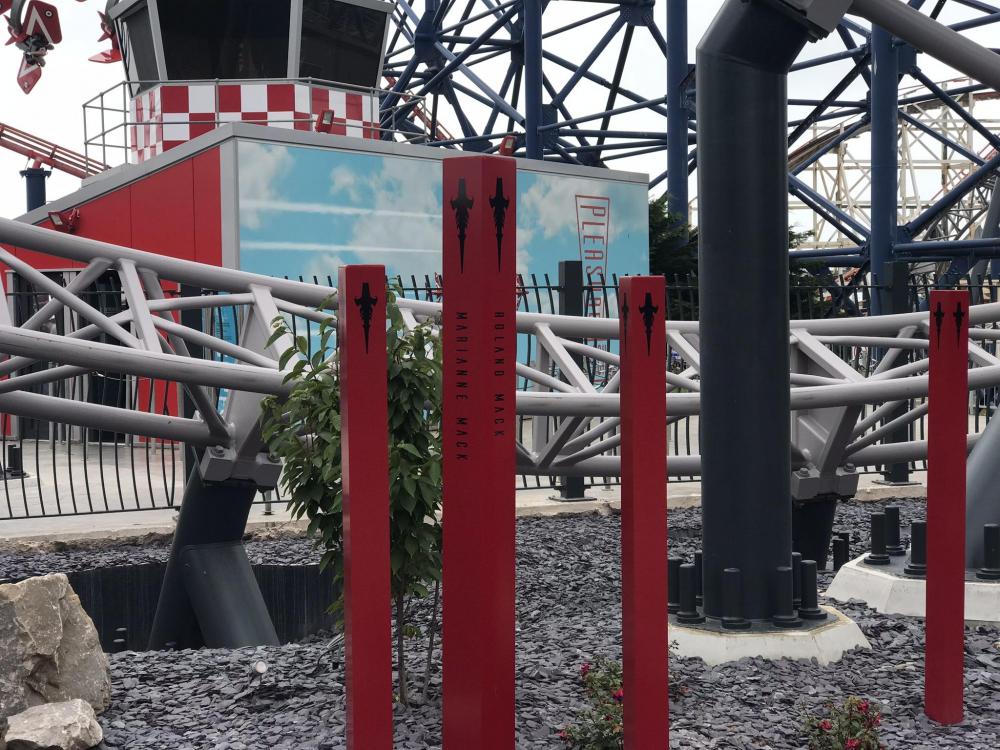 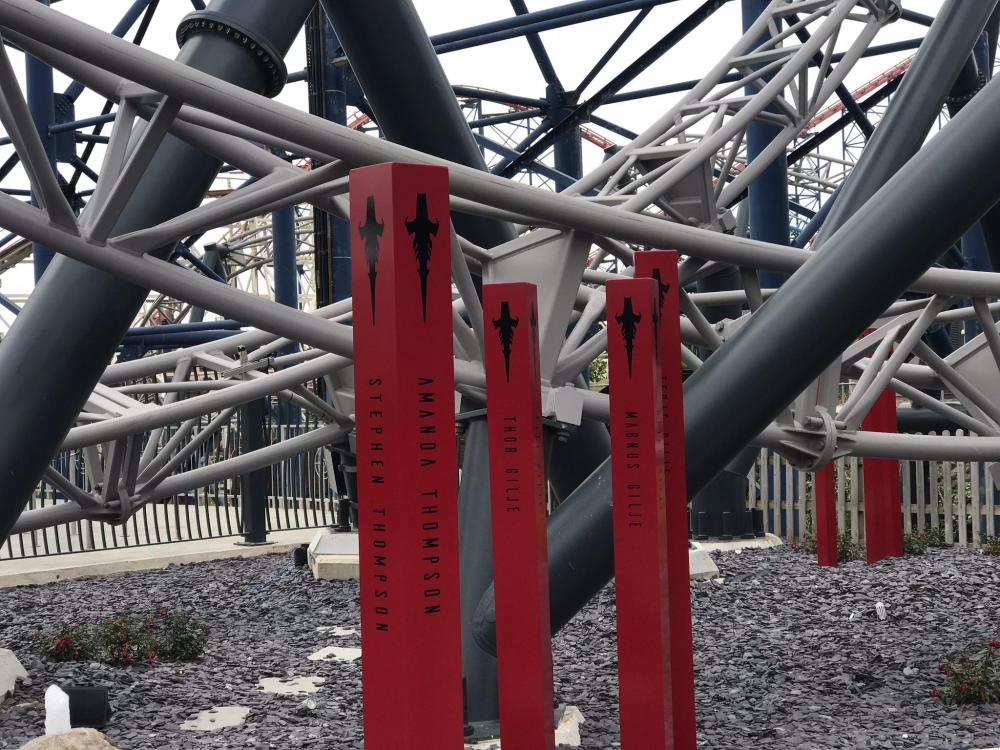 Conclusion
Blackpool Pleasure Beach is a very well rounded, affordable park which is easy to get to with plenty of staff on hand and is home to several unique experiences in the UK. The very reasonable entry price along with the new ride Icon really gives main rival Merlin parks a run for their money this year. It also helps BPB that their operations are much better than Merlin's have been this year in general. I'd definately return just to ride Icon again but I'd stay for the charm of the undeniably british family run park.