It's only taken me 4 months to get around the posting this..

Walibi Holland's Halloween Fright Nights is well respected in the scare industry. They pump serious amounts of money into their attractions, and have TONNES of actors to boot. They go all out. And that's one of the many reason it had been on my to-do list for so long, and why I eventually went last year.

Now I actually wrote a trip report in Word a while back trying to cover the whole event. That report ended up being over 12 pages of pure text, and that was with me being concise. And that's just down to the sheer quantity AND quality of it all. The event is made of a family friendly daytime event (Spooky Days), with 3 scare zones and an upcharge scare maze, and an evening event (Fright Nights), with 6 upcharge mazes and 8 scare zones. So I won't cover them all, but I'll just instead pick out some particular highlights...

This has been mentioned on the forums a few times, most recently in my review of their VR experience, Neurogen. The Clinic opened in 2016, and is an entirely alone experience where - for the majority of the experience - you are strapped to a gurney and wheeled around a hospital and, ahem, associated areas. And in short, this attraction is genius - utter brilliance. It's definitely my favourite 'scare' attraction, and I'd say up there with one of my all time favourite theme park attractions.

I won't say anything that happens here, but whilst it's alone and marketed as 'intense', it's very different to the UK definition of an 'intense'/extreme experience. Psychological, theatrical and haunting are 3 good words to describe it. The experience stayed with me for days afterwards too; it was always on my mind.

Unsurprisingly, it comes in at a hefty cost - €17.50 if booked in advance. But it's worth every cent and so much more. 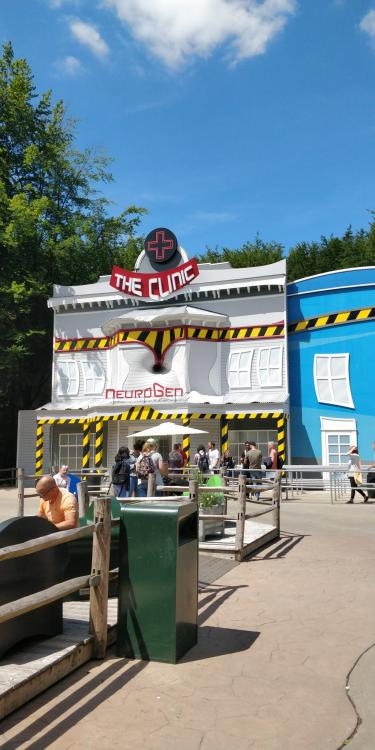 The other of the park's 'intense' mazes. In groups of at most 6, you explore a set of sewers looking for vermin...though maybe the vermin are looking for you. And because you're in sewers, you of course go through the entire experience in waders, since you go through most of the maze knee-deep in water! Again, a genius set up, and felt super realistic!

Below suffers in one major way though: it's very short. After getting the waders on and having a walk pre-show (by means of a guided tour), you're not in the maze for long. Arguably you don't want to be in there for too long: despite the waders, my feet were feeling a bit cold towards the end. But having said that, it's still a super immersive experience and a genius set up that I've never heard of anywhere else! 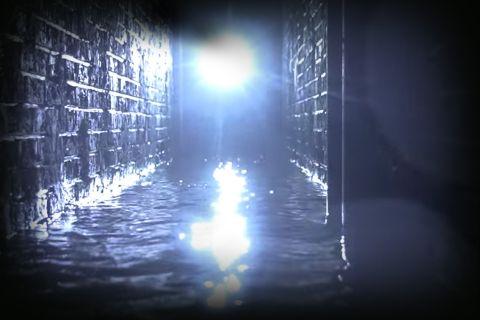 Walibi Holland have 4 "normal" mazes, which you can buy individually or get a combo ticket for €24 (which I did). However, Psychoshock was the highlight of those 4.

Before going onto describing Psychoshock, just a quick word on how the normal mazes operate. They're designed to have 1500pph (for comparison, that's about 3x what Thorpe's mazes manage on average), so usually have a continuous flow of people. Every actor has an accompanying 'effects button' which they press, which can set off an array of sound, lighting, smoke and/or water effects to go with their scare. And with a large number of actors, even if you miss one's scare, you'll be hit with another, and not lose any story either.

You choose a 30min time slot for each where you have to arrive in the queue for it. Too early? Not getting let in. Too late? They'll see what they can do, but otherwise, tough.

Psychoshock is a fairly standard maze in theme: your generic 'laboratory with something gone wrong' vibe. But it's themed exceptionally well (apparently, this 2011 maze was designed by someone who has since gone on to design the theming concepts for stuff like Baron at Efteling), with a very good - and long! - layout. And the group I was in did this maze about half an hour after it opened, which was clearly a quiet slot. As such, out group of 3 was sent in with no one else, before we were split up in the pre show and made to go through the maze entirely alone. The actors are clearly prepared for this and knew full well how to tackle me. A particular highlight was an actor with a syringe squirting water in my face, and then at my crotch making it look like I wet myself...and with no witnesses to say otherwise!

My experience of Psychoshock is likely a bit bias because of alone treatment, but I really did love it. Even ignoring that, the set up of the maze is up there with some of my favourites. The other mazes were all set up so they could choose to either 'batch' groups at regular intervals, or to let in a continual flow, and the actors seemed prepared for any eventuality. Was really fantastic to see them by so reactive! 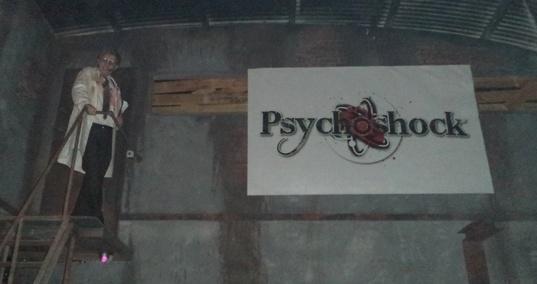 Eddie is the headline character of Halloween Fright Nights, and has been for 13 years. He's been played by the same person every year. And he's very much synonymous with Walibi Holland across Europe. He's effectively your standard demented clown who likes to do evil things, and a quick look at things like his Facebook or YouTube pages show the style the park have gone for with him (seriously, watch some of the videos they've produced - they're amazing!!).

In recent years, the park have gone all out with Eddie, slowly giving him a more fixed presence in terms of a show and a mini area. In 2019, one of the 4 new scare zones was entirely based around Eddie: Eddie's Festival of Freaks. Taking place in an area outside the normal park, just behind Goliath, it is effectively a mini Festival! Freak show acts akin to the Carnival of Horrors, roaming 'freaks' (bearded lady, strongmen, fire eaters, etc), sideshow games, street meat, a ghost train, etc. This is all complimented Eddie's presence, with him being a ringleader of sorts, and his show: Eddie's Roast Show, where he effectively invites audience members on stage, and roasts them as harshly as possible.

The whole area was chaotic, but in a good way. So much fun, and very easy to forget you're actually at a theme park event. The downside is that it's all in Dutch (which sounds stupid given it's a Dutch theme park, but they're very good at being accommodating to English speakers, as well as German speakers too). But even with the language barrier, I really enjoyed the area. Like, really did. 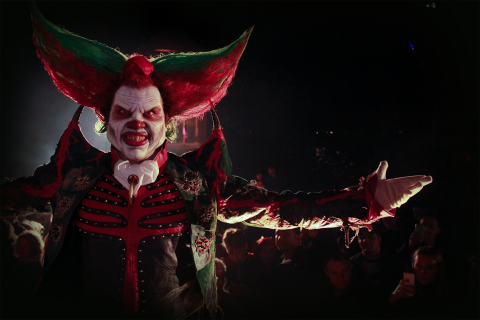 Firepit and Campsite of Carnage

If one area highlights the stark difference between Walibi Holland's and the UK's Halloween events, it's Firepit. An American hillbilly area (and, as such, all the actors spoke with southern American accents), the area featured (unsurprisingly) a giant firepit, live music other stalls and roaming actors (most of whom had chainsaws), along with a couple of actors above the entrance arch to the zone. The tone, however, was jaw-dropping.

Firepit was all about gross, inbred hillbillies who had no problem thrusting sexual comments in your face, swearing constantly and being on the funny side of rude (just). Nothing is scary; everything is there to shock you. Because of the context of the event, being strongly pushed as a dark, 16+ event, they can get away with it, but it's certainly feels like it's pushing towards "how controversial can we be without getting into trouble?". An example from the entrance arch characters: "Welcome to the f**king Firepit...oh, but we don't mean that how y'all think we do, we mean the literal...f**king...Firepit" (the couple then proceed to imitate having sex).

Personally, I found the area absolutely brilliant. It was designed fantastically. It's clear they had a vision, and they've realised it all the way through. 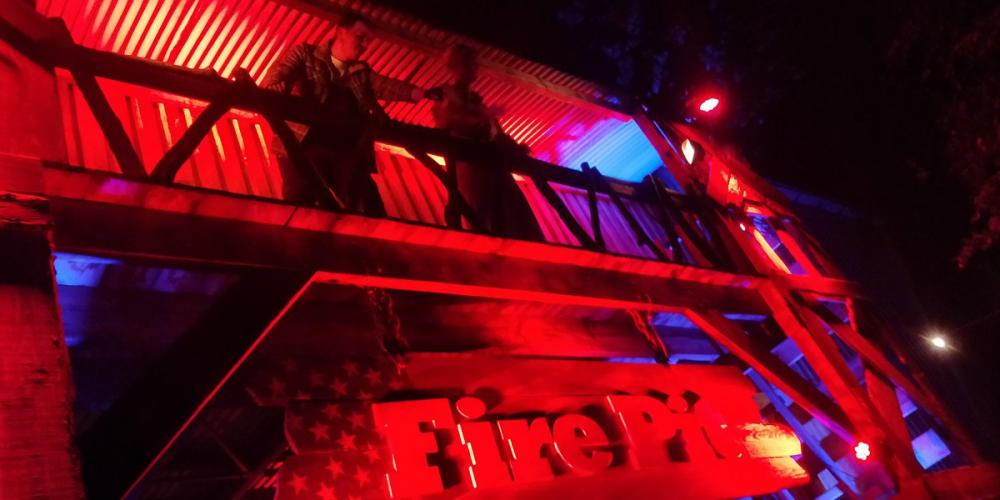 A further surprise was Campsite of Carnage - marketed as a scare zone, but was in fact an outdoor (and free!) scare maze. A simple but clever layout, with a lot of chainsaws and sweary hillbillies. Again, it focused more on trying to shock than scare you. The ending, however, truly did scare me. You're chased into an enclosed section (which is effectively a corridor) by a chainsaw, and when inside, the actor plays a sound effect which makes it sound like you're surrounded by chainsaws. Chainsaws don't do anything for me, but when it sounded like I was in an enclosed space surrounded by 10 off them, it made me jump and I definitely picked up the pace!

Amazingly, the area is also open during the day for Spooky Days (presumably to just help with capacity), with none of the sweary actors in the Firepit, and a shorter, less-chainsaw-filled version of Campsite designed for Under 12s! 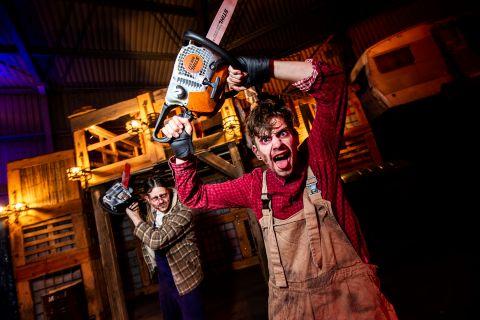 I think I'll leave it there. I haven't touched the park's FIVE other scare zones, which admittedly had varying quality, and could go into much greater detail about the other 3 mazes. Nor the stage by the entrance of the park with music acts. Or all the pop up stalls they have. But I don't want to ramble on forever. But suffice to say that, despite their lack of presence here, even the weaker experiences were still at least 'pretty good'.

How expensive is it?

Short answer: Very. To book everything costs about €90 on a quieter night. But even then, it could be tight to do all the scare zones and rides. If you go on a busy day and want to do rides as well, you'd maybe want to invest in their Fastpass too, which adds even more cost. The event is strictly pre-book only, but there are some good deals when they first release tickets.

How busy is it?

Short answer: Very. The park get up to a quarter of their annual visitor numbers in the 3 weeks that the event goes on for. Their quietest days still see them attract 10k people. I visited on a Friday, and it was reasonably quiet until about 6pm, but from then until close (11pm) it was rammed!

Is it worth it?

tl;dr - Walibi's Fright Nights is, by a country mile, the best Halloween event I've ever attended. If you like Halloween events, go to Walibi Holland. You won't regret it.

The park's 'aftermovie' for the 2019 event, showcasing most of what they offered..