As we know, next month will see Thorpe Park give a slight retheme to their 115ft drop tower, Detonator. A general shift in target market has to led to the perhaps knee-jerk reaction to bring in a family-themed area, and the easiest way to go about that would be an IP. So we have 'Angry Birds Land', and Detonator will become 'Detonator: Bombs Away'. Who knows what this slight retheme will bring? Well, we will find out in little under a month's time anyway.

With most eyes focused on the future, I've decided to turn my head and look back on the past. Detonator opened 13 years ago and is a staple thrill ride within the heart of the park. The ride and its overall experience have remained pretty much constant, so the ride's history seems far from exciting. However, the circumstances in which the ride even came to the park and the behind the scenes stories are far more interesting...

The story starts on a Friday afternoon, in July 2000. A smoker discarded their cigarette into some bushes, which quickly started a fire; 'The Thorpe Park Fire'. Slight damage was done to Mr Rabbit's Tropical Travels. However, substantial damage was done to the nearby Wicked Witch Haunt ride.

Wicked Witch Haunt was so severely damaged it could not be saved; the building was completely destroyed. Of course, the ride needed replacing. At this time, there were very few major rides at Thorpe, and the multi-million pound, record-breaking Colossus was in its planning stages. So the ride had to be cheap and not steal the limelight from that. Also, Thorpe were still very much a family-park, with a big focus on family rides. So the ride had to appeal to a large audience.

The park's first choice was, however, not Detonator. Instead, it was this: 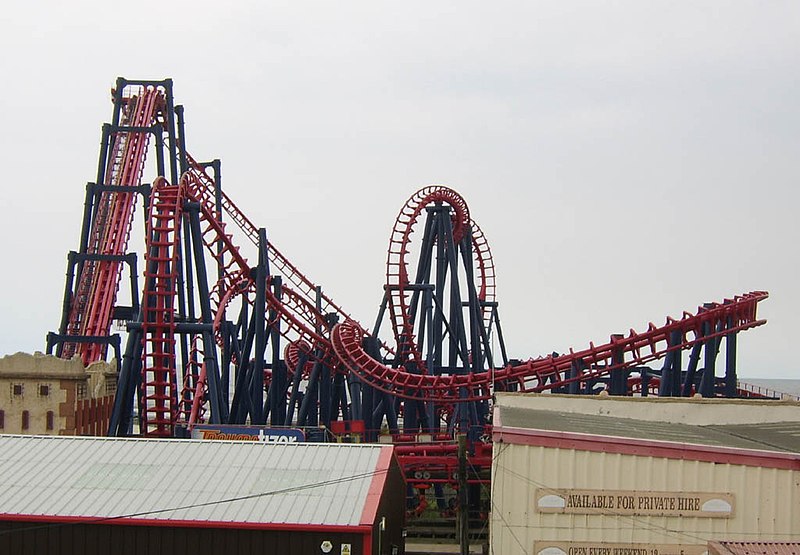 It was a standard Vekoma SLC! The photo shows Traumatizer at Pleasureland Southport, and was later moved to Blackpool Pleasure Beach and named Infusion. The ride is a family roller coaster, very simple, nothing too special or exciting. Plus, it was quick and easy to construct. At the time, it would have fit the park perfectly. The plans were very quickly rushed together and submitted to the council (in fact, Traumatizer was used to judge noise levels for this new coaster). And, from what I can gather, they were approved. Unfortunately, the plans themselves are not online at all, so the exact look, location of the ride is unknown to me! But why was no such coaster built?

Well, very simply put, it came down to troubles with the energy supply! The plan was to get the ride opened for summer 2001. However, associated costs with the ride and power supply for the ride (whatever that means) meant it wouldn't open by then. So the plans were shelved.

At this point, we're in October 2000. The 2001 season would start in March; a mere 5 months away. So Thorpe's management decided to go for a drop tower. Due to the naturally thin structure, it would have little 'visual pollution', it was quick to construct and, though quite thrilling, did temporarily fill in a missing part of the park's line up at the time. Note - temporarily. The original plan was the have the ride operating for 1 season, then replace it with what another coaster. This is why Detonator 'broke through' Thorpe's height ceiling of 100ft - it was only meant to be around for a year and it was under special circumstances!

Everything was all approved and everything was all good. Detonator opened at the start of the 2001 season, along with Zodiac and Vortex (funnily enough, Vortex opened rather late and the park were investigated by Watchdog for misrepresentation. Oops). Colossus was under construction and was hoped to put Thorpe Park 'on the map'. Behind the scenes, plans for a new roller coaster, namely Nemesis Inferno, were well underway.

However, something unexpected happened. Detonator was popular. Really popular. In fact, it averaged "over 9 out of 10" on customer reviews. No park can afford to get rid of a ride that is THAT popular. It had to stay. So the utmost was done to ensure allowed for the ride to stay. Fortunately, the layout allowed for this to be the case.

There was still one more problem though. The ride only had temporary planning approval. By the end of 2001, they would have to take it down. So an extension to this application was sought after. It was by no means a guarantee approval would be given, due to the fact the ride was tallest on park. But, fortunately, the ride was approved for another, temporary, 5 years.

Why only 5 years? Well, Detonator was not in Thorpe's long term plans and it's a fairground ride. Could 6 years of constant operation be too much it? Would it maintain popularity for 5 more years? Would it fit in with the park then? The park weren't too sure.

Of course, the ride stayed, and the park applied for permanent approval of the ride, which was granted. In fact, the MTDP at the time even indicated a second drop tower joining Detonator, but alas, it never happened.

Detonator is, in terms of G-forces, the most intense ride on park. It's regarded as one of the better drop towers in the world and works so well within Thorpe Park. Yet the ride only arrived due to a series of accidents and misfortunes that the park had to get over. Had those accidents never happened, the park could well be very different and - in my opinion - worse off. Would we ever had gotten Inferno if a Vekoma SLC was put in place? Would said SLC still be here today? Would Thorpe be as popular as it is now? Who knows! All I know is that, 13 years later, Detonator remains a favourite to all. How nice, ey?

May Detonator stand tall for many more years, regardless of theme...

Disclaimer: I cannot guarantee 100% accuracy behind this information. A lot of the information was deduced from past planning applications and, in some cases, such applications were not always complete. Should there be any information which you believe to be incorrect, please feel free to leave a comment and say so!