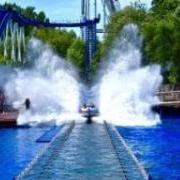 Incredible. Less than 24 hours since this incident and its already testing!    Edit - and the ride reopened around 12:30pm!

Just because a park cannot realistically reach a milestone is not to say they have to go the full way, but take some influences from this scenario.   I get that storing sufficient ride parts