Loving the contrast between the rotting zombie face and the Peanuts characters there.

Plus adding a ride right on the beach would just make the park feel more cluttered than before...   A massive plaza with fountains/seating/food/staging is the best bet for any beach removal. 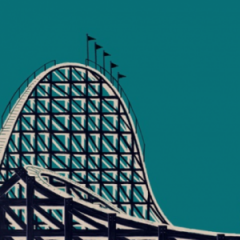 ^ Exactly. The Island behind The Swarm is clearly large and will therefore probably be the spot for Thorpe's next BIG investment.    Thorpe probably realise this and with therefore make sure