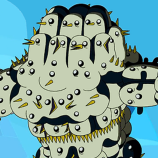 On a slightly lighter note, here is my pet cabbage, Pretzel. His diet consists of cookie and spinach, and he likes to chew plastic a bit. Recently he's been getting a bit smelly and brown, I think

What a load of nonsense. This is probably the stupidest post I've seen. Noone names their pet after a foodstuff.